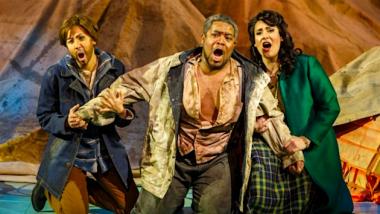 Is It Sacrilege to Shorten Operas in the Digital Age?

Recently, Pittsburgh Opera produced a truncated adaptation of Mozart’s Idomeneo — an accounting of the aftermath of the Trojan War — stripping the score from more than three hours to about 80 minutes.

There’s a general, unwritten taboo against abridging an opera beyond tweaking some of the dialogue or pruning a recitative or aria here and there. But why? Theater directors aren’t so precious with their source material; poor Shakespeare’s words have been altered, sliced and stitched so often than many productions of his works resemble some sort of Victorian (Edwardian?) Franken-play. This doesn’t happen nearly as often in the opera world. Is this unwritten commandment useful or outdated given the state of the world’s attention span and the other entertainment options of the digital age?

“Opera is a long-form art form,” said Glenn Lewis, the conductor of Pittsburgh’s shortened Idomeneo. “If [we] cut everything down to 90 minutes because the Disney company has decided that’s the ideal entertainment length, then we’re not serving ourselves well. We’re not capitulating to the idea that just because people’s attention spans are shorter, we should oblige.”

(According to a much-cited and somewhat controversial study by Microsoft in 2015, human beings’ attention spans are about a second shorter than the average goldfish now. So that’s good news.)

Lewis explained that the Pittsburgh production grew out of an idea to present Mozart’s grand, Grecian opera seria for a fraction of the cost and in a way that purportedly added a dash of cultural “relevance,” one of the great artistic buzz words of the past decade. Gone were the glorious choral moments, the figures from Greek mythology, and the more nuanced aspects of the narrative. What remained were dramatic highlights from Mozart’s score, repackaged into a short evening that fits more comfortably with a pre-show dinner or a post-show drink.

Depending on who you ask in the opera world, cutting a work can either enhance or destroy, though shorter educational versions of the classics are a universally acknowledged exception. According to Greg Henkel, managing director of the artistic department at San Francisco Opera, “there are some artists in the world, conductors, directors, that feel that there are pieces that don’t get touched, that opera is a holy art form. Now, I’ve dedicated my entire life to it, and I have a great deal of respect, but we’re not locked into a museum. These pieces are alive, they’re breathing.” Henkel said that he thought that were some of the composers of the canon alive and scribbling today, they’d be likely to adapt and shorten their work to fit with today’s production standards.

“I get the argument,” said Richard Russell, executive director of Sarasota Opera. “Attention spans are shortening and now there’s more electronic entertainment competition. But cutting would fundamentally change the work, and I question whether that adds value. I think it’s a slippery slope. Shortening an opera can change character motivations and then you miss storylines. How do you change things without destroying the structure of the piece? I can’t imagine making La Boheme shorter than it is.”

Where’s the tipping point on that slippery slope? After all, much of the standard operatic repertoire has accepted cuts (never in Verdi, of course, no one’s that barbaric), made for a variety of practical — i.e., monetary — or dramaturgical reasons. Lewis pointed out that often, collective bargaining agreements with stagehand unions and overtime for musicians and singers actually play a role in determining whether an act is abbreviated. Wagner’s Rheingold is supposed to be played straight through, but there’s often a break for the singers and musicians rather than the audience. There’s a substantial standard cut in Tristan und Isolde because some of the vocal lines are so taxing as to make completing the opera difficult for the singers. In the bel canto style, ornamentation, repeats, cadenzas, and cuts were expected of directors and singers. Cuts are not unusual, in other words.  So what’s the difference between this and truly abridging a full-scale opera?

Opinions vary. In 2017, San Francisco Opera cut a four-plus hour opera to about three hours. “I’ve always appreciated the dramatic economy of a one-act opera,” Henkel said. “If we can pack in all of the drama of a three-hour opera into a one-act evening, then why not? It’s about making the most compelling evening for an audience possible. It’s about removing things that may not be necessary anymore given the supertitles and what not.

“It’s about the most effective version of an opera, we want people to be swept away and caught up in the romantic feelings.”

In the case of Pittsburgh Opera’s shortened Idomeneo, Lewis said that it’s simply difficult to produce and not as well-known as some of his other operas (Don Giovanni, Magic Flute, etc.). It was less of a risk. But Russell is skeptical of any such drastic revisions. “I get suggestions very often from people about how to make opera more accessible. But I’m hesitant to do this in an effort to attract new audiences. Stories are integral, and the musical gestures are in response to what is set in the text,” he said. “The music informs on what’s going on in the text.”

While much of the standard operatic repertoire lasts in the three to four-hour range (except for Verdi, whose scores rarely hit the three-hour mark), newly commissioned work often fits into the 2½–hour range. “How long it takes to tell a story might change generationally,” Henkel said. “I think the story one is telling determines the length.” He pointed out that opera is an exceptionally collaborative art form. Cutting a verse of a chorus in Carmen could mean that there’s not enough time for someone’s entrance or exit. Russell concurred: “I tend to be more accepting of theatrical work that’s been adapted by a director. It’s one element, text vs. text and music. You’re not doing so much damage.

Indeed, Lewis said that to make the revisions work the director, David Paul, had to adjust the key signatures of some of the recitatives of Idomeneo and massage some of the lines to make them fit together. It wasn’t noticeable, and Pittsburgh Opera’s effort to create something new on a budget is admirable. But slicing up a libretto and trying to create a new context for the story irrevocably altered the dramatic scope of the work. The powers that be were aware of this and retitled the work afterWARds: Idomeneo Reimagined, a pun on the post-Trojan war nature of the story. But it really wasn’t Idomeneo anymore. It was something new. For better or for worse.

Thea Musgrave’s Mary, Queen of Scots Gets the Resurrection It Deserves

The vibrant 1977 opera shines on this lovingly rendered CD reissue.