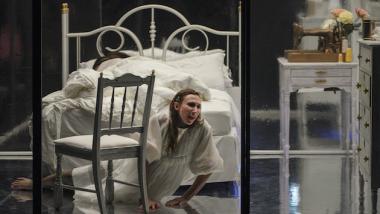 We hear a lot about incubators as nurturing centers for tech startups. The collaborations between Los Angeles Opera’s “Off Grand” series and New York’s Beth Morrison Projects are accomplishing the same thing for opera. The series provides an alternative to the economics and scale of the traditional opera house by providing an intimate stage environment where challenging new work can take risks — operas like prism.

Composed by Ellen Reid to a libretto by playwright Roxie Perkins, this visceral work about the lingering impact of sexual abuse had its world premiere over the weekend at REDCAT (the Roy and Edna Disney Cal Arts Theater) downstairs from Disney Hall.

Prism (Reid spells it in lower case with spaces: p r i s m) tells the story of a traumatically damaged mother and daughter: Lumee (mezzo-soprano Rebecca Jo Loeb) and Bibi (soprano Anna Schubert). In an attempt to escape the past, they have retreated into a single room, their “Sanctuary.”  But as in the film Rashomon, over the course of the opera the violent act that has come to define their relationship is examined from multiple perspectives through the prismatic reflections of memory.

The opera treads a fine line between poetic abstraction and gut-wrenching reality. But it is Reid’s exceptional score with its wide-range of musical vocabularies, and the dramatic power of Loeb and Schubert’s performances that give prism its overwhelming power.

Reid writes vocal lines for Lumee and Bibi that can soar lyrically one moment then go on the attack with combative intensity pushing both singers to the top of their tessitura. Her orchestral writing for the 14-member orchestra and 12 members of the Choir of Trinity Wall Street, combine feelings of cinematic suspense a la Bernard Herrmann with vocal lines that evoke the spirit of Benjamin Britten’s Turn of the Screw. But just when you feel comfortable, Reid changes gears and the music shifts into a realm that is percussive, dissonant, and a clockwork of rhythmic fluctuations.

As prism opens, we see Lumee constantly hovering over her chronically ill daughter, who has completely lost the use of her legs. Bibi is fragile, fearful, skittish, and helplessly reliant on her mother’s attention. But there are voices that keep calling to Bibi (the offstage chorus) that draw Bibi toward a deeper reality. They challenge her to summon the strength to question her reality, the extent of her illness, and confront a deeper truth.

Questions emerge. Is Bibi truly ill, or is she suffering from a form of traumatic paralysis? Is Lumee the protective caregiver she appears to be, or a woman plagued by guilt compensating by killing her child with kindness? Is this room, with its single door and multiple locks, a sanctuary or a trap?

Act I, designated, “Sanctuary as it should be” is a world of constant medication. To bring relief to their fear-filled existence they chant a mantra of happiness. But try as they can, the ominous aura of memory is lurking, trying to creep under the door jamb.

Reid’s music is filled with lyrical arias and duets for Bibi and Lumee, while the orchestration creates a Hitchcock-like sense of drama and foreboding. In this act, the chorus and orchestra are heard but not seen. Only a group of four dancers (choreographed by Chris Emil) are capable of reaching the inner sanctum. They are projections of Bibi herself. They can comfort and nurture by taking her in their arms and allowing her to fly. But they can also stir painful memories.

Act II, “Sanctuary as it was,” takes us into the past, a percussive, electronic realm of disco madness and atonality. It’s a confusing, distorted realm accentuated by downed shots of Bacardi, the scent of Jasmine Breeze body spray, and sweat reflected in 22 glittering disco balls.

We see Bibi as she was, standing alone, fascinated by this world of the senses, a young innocent. We also see Lumee, in another persona: coarse and rude and selfish. Intent on satisfying her own cravings, she abandons her daughter, who is overwhelmed and raped to the harshest of Reid’s music. The act itself is abstracted by the choreography, but the reality is visceral.

Act III, “Sanctuary as it is,” portrays post-traumatic shock set inside the litter-strewn room that Bibi and Lumee share with discarded clothes, peeling wallpaper and bulging trash bags. Like the room, their relationship has been torn apart. The remedy Lumee proposes is to totally retreat into a fantasy world where the past is forgotten, bringing the story full circle.

Reid freely moves from soaring melodies and rich choral harmonies to abrasive dissonance accentuated by the twittering of col legno strings and pre-recoded electronic effects. In addition to the strings, winds, harp, piano, horn, and an array of percussion, Reid incorporates the weird, ominous rumblings of a Waterphone, the bending notes of a Flexatone and the effects of an SPDSX sampling pad. When Perkins’ libretto indicates a color code, Reid answers with a convincing musical equivalent.

On Jan. 6, Prism will have its East Coast premiere at the La Mama Theatre in New York as part of the Prototype Festival.

John Cage’s aleatoric collision course of all of opera history plays on the soundstage of A Night at the Opera.