Thea Musgrave’s Mary, Queen of Scots Gets the Resurrection It Deserves

I’ve always been frustrated by the way opera companies feel the need to pump out world premieres when there is a such a wealth of modern repertoire waiting to be revived. There’s little sense of a canon building up — new works are performed for one or two seasons and then disappear into oblivion. Even if these operas are captured on recording, it’s often difficult to track down their audio remnants; some exist only on vinyl and are never digitized, and many are never commercially released in the first place.

Which is why I’m thrilled whenever a record company excavates one of these forgotten masterpieces from their archives. Sony, for example, recently rereleased Alberto Ginastera’s deliciously creepy Bomarzo, an opera that that had to premiere in Washington, D.C., in 1967 because it was too risqué for the composer’s native Argentina. But like many reissues, it’s a cheaply made edition that doesn’t even include a libretto. 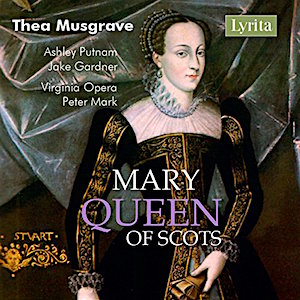 By contrast, this first CD set of Thea Musgrave’s 1977 Mary, Queen of Scots has been prepared with love and care by the British Lyrita label (Lyrita SRCD 2369), which specializes in these kinds of “resurrections.” While this recording may have been gathering dust for 40 years, the opera itself is by no means a stiff, reanimated mummy. Musgrave’s neglected Mary remains a vigorous and relevant work of musical theater, proving that fresh operatic material needn’t necessarily be brand new.

Musgrave, who was born in Edinburgh and relocated to the U.S. in 1972, celebrated her 90th birthday last year. She continues to compose at this ripe age, recently completing a chamber reduction of Mary, Queen of Scots that will hopefully inspire smaller companies to mount the opera. This recording, first released on LP by Moss Music Group, was made at the 1978 U.S. premiere in Virginia (a production with much of the same cast played at San Francisco Opera the following year). It’s not clear how much remastering Lyrita has done to that original recording — the sound quality is constrained, and there is a lot of ambient noise, including an audience member who hacks up a lung over the course of Act 1.

Nevertheless, you can hear through the rough recording to the diamond that is Musgrave’s opera. The composer adapted the libretto from a play by her former collaborator, Peruvian-born Amalia Elguera. It’s a kind of prequel to Maria Stuarda — but while Donizetti’s opera is a highly fictionalized account of the deposed queen’s execution at the hands of her cousin Elizabeth, Musgrave’s work offers a more historically accurate retelling of Mary’s rise to power.

There’s still a healthy dose of Italianate melodrama — Mary is dripping with political intrigue and Shakespearean backstabbing (though the libretto’s language is only slightly Elizabethan). It may be too much for some listeners, but what fun is subtlety in opera? The action takes place between 1561, when a teenaged Mary is summoned back to Scotland from France to assume the crown, and 1567, when she is forced to abdicate (the liner notes provide a useful timeline of these events). As Mary feels out her new queenly role, she must contend with the various men vying for the throne — her consort Lord Darnley, her eventual third husband Lord Bothwell, and her half-brother James.

It’s a cynical, 20th-century take on Mary’s life that exorcises any illusions of courtly romance or honor. Sex is a political maneuver in Musgrave’s vision of Scotland — the passionate love affairs of Donizetti’s Tudor operas are replaced with abusive relationships and even a scene of rape.

Although Mary suffers at the hands of her male aggressors, Musgrave grants her a great degree of agency. She’s a queen in control of her fate — even if her decisions are sometimes rash, she unwaveringly asserts her authority and royal privilege. In the title role, Ashley Putnam conveys Mary’s proud defiance in octave-plus leaps to brassy top notes. She wields her razor-edged soprano like a rapier during the queen’s Act 2 face-off with the power-hungry James. The scene closes with Putnam triumphantly proclaiming “I shall rule alone” over an orchestral anthem.

Although Musgrave was already stateside when she wrote Mary, the work belongs to a period when Britain was emerging as a new hotbed for opera. There was a distinctly home-grown flavor to many of the works written in the mid-20th-century — U.K. composers seemed bent on reclaiming their national heroes from the bel canto tradition. Mary was preceded by two other major operas on Tudor-era subjects: Benjamin Britten’s Gloriana (1953), which dramatizes Elizabeth’s affair with Essex, and Peter Maxwell Davies’s Taverner (1972), based on the life of the eponymous composer and organist.

Like Britten and Davies, Musgrave integrates 16th-century songs and dance forms into a modernist idiom. One of the most striking moments in her score is the Act 1 ball, which seems modelled after a similar scene in Gloriana. An onstage band play pavanes and saltarellos that clash tonally and metrically with murky orchestral textures. Musgrave has carefully culled her tunes and texts from historical sources. She even manages to sneak in a clever “signature” with her rowdy, Highland-dance setting of a William Dunbar poem that contains the line, “He hoppit like a pillie wanton, For love of Musgrave.”

It’s the one bit of local Scottish color in the opera — Mary, after all, lived nearly half of her life at the French court. Likewise, Musgrave doesn’t rely too much on the period-music pastiche. Her own personal style is tumultuous, reflecting the violent acts taking place both onstage and off. The Virginia Opera Orchestra, forcefully directed by Peter Mark, fires off militaristic drum tattoos and sputtering bugle calls. In quieter passages, Musgrave generates an ever-present tension with sour oboe lines, ominous harp ostinatos, and sinister string clusters. Even the “Peace Chorus” is ridden with thorny harmonies, subtly signaling that all is not well. It’s a relentless but thrilling sound world that offers a more fitting soundtrack to Mary’s turbulent reign than Donizetti’s florid writing.

The three male leads channel the score’s frenetic energy into their performances, pushing their voices to brutish, hypermasculine extremes. Tenor Barry Busse executes Bothwell’s Act 1 outburst with unrestrained ferocity, spitting out spiteful consonants and assailing Mary with howling high A’s after she banishes the earl. Jon Garrison as Darnley has a similar episode in Act 2, when the king consort drunkenly swears vengeance on a supposed rival; the tenor deftly navigates his craggy vocal line, peaking in hoarse cries of “I will kill him!” With his oily, sarcastic tone, baritone Jake Gardner is a snakelike James; during the character’s attempts to reclaim the throne from Mary through gentle coercion, Gardner’s seductive delivery disturbingly hints at the possibility of James’s incestuous desire for his half-sister.

Lyrita has also recently put out a splendid recording of Musgrave’s orchestral works, which includes the Stravinskian tone poem Phoenix Rising and the Scottish-themed tuba concerto Loch Ness. I look forward to future Musgrave releases from the label — I’m especially curious to hear the 1980 recording of her Christmas Carol opera, which is long overdue for a reissue.