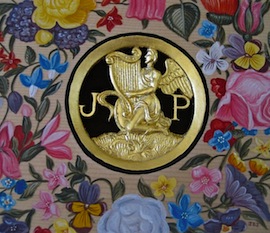 To chat with John Phillips about harpsichords is to tap into two histories at the same time — one local, recent, and personal; the other a rich, old, international tradition. This duality is inherent in the place where Phillips spends most of his days: a state-of-the art harpsichord workshop on Grayson Street in Berkeley. There, you are likely to find an instrument that has been playable for 350 years standing next to one that has been operational for less than 350 hours. And the longer you sit there, the more likely it is that some early music luminary who has known Phillips for the last three decades will wander through the door. I recently had the opportunity to talk with Phillips about his career, the history of harpsichord making in the Bay Area, and Phillips’ latest projects. To say that he floats on a stream of historical consciousness is something of an understatement.

Phillips began building harpsichords at a seminal moment in the history of the early-music revival. In 1969, while an undergraduate student at UC Santa Cruz, he built his first instrument, one of the dozens of kit models that invaded the garages of home tinkerers in the ’60s and ’70s. Although he wasn’t quite aware of it at the time, Phillips had been infected with a chronic illness — let’s call it “pluck-o-philia” — from which he would never recover. Since those meager beginnings, he has built 106 numbered instruments (that is, 106 professional commissions, not including a few more kits and other “apprentice instruments”). Those harpsichords are played by devotees and professionals around the world, from Nicholas McGegan, conductor of the Bay Area’s esteemed Philharmonia Baroque Orchestra, to Trevor Pinnock, British-based founder of the English Concert.

To make one of these old instruments play again destroys all these fleeting remnants of an old instrument.The notion of building harpsichords for a living may seem a bit far-fetched in the modern world, yet the history of professional builders in California stretches back for nearly a century. Among the earliest such figures was Julius Wahl, a German immigrant who began working in Boston’s Chickering piano company at the turn of the 20th century during a period when Arnold Dolmetsch, a pioneer of the early-music movement in America, also worked there. Inspired by Dolmetsch, Wahl turned to harpsichord building. He made his way to California by the early 1940s, where he built instruments with some support from Stanford University. Others followed in his footsteps, and the initial members of the historical-instrument movement clustered around the Peninsula. By the time that Phillips came of age in the late 1960s, there was something resembling an established field here — enough so that, when he founded the Berkeley Harpsichord Makers Association in 1975, he had three colleagues with whom to share shop space, and a reasonable hope to supply himself with French spruce and bird quill. He proved himself correct, and, within a short time, Phillips had set up an independent shop. 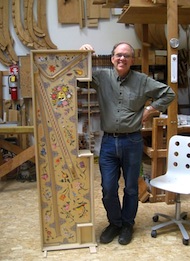 Harpsichord builders can’t exist in a vacuum. Someone had to be there to support these young craftspeople. “There have to be players there to attract the makers,” says Phillips. Influential harpsichordists began making their way to the Bay Area — a “critical mass,” as Phillips calls them — quite early on. Wahl found support through a former student of the eminent Wanda Landowska, a player named Putnam Aldrich who was employed in the ’40s and ’50s by both Mills College and Stanford. Phillips’ own support came first from harpsichordist Mark Kroll, who was in residence at Santa Cruz while Phillips was a student there, and who gave him his first pseudo-commission: a kit instrument for the music department. Whenever Phillips talks about this early specimen of his work, he will smile meekly and mutter, “And they still have the thing. ...”

By the 1970s, the hub of early music had defected from the Peninsula to Berkeley, largely due to the efforts of Alan Curtis, then a professor of musicology and now a frequently recorded harpsichordist, conductor, and editor of important musical editions. “What Alan was doing in the ’60s was completely new,” says Phillips, referring both to Curtis’ seminal performances during this period and to his importation of instruments built after historical models. Curtis’ productions of early opera at Berkeley sparked the interest of young players, many of whom were further fostered under the wing of Laurette Goldberg, “a force of nature,” as Phillips fondly refers to her. Goldberg went on to start the Philharmonia Baroque Orchestra (at that time “a coterie of people playing funky old instruments,” Phillips recalls). The band used a Phillips instrument from the start, and the rest, as they say, is history.

Phillips has been in the harpsichord-building game long enough to have seen the field go through many changes. In the early days, Phillips traveled around the world, visiting early instruments in museums and private collections, and drawing blueprints from their interiors. “When I started doing this, all you needed to access these collections was a note from your mother,” Phillips quips. “Now, it’s almost impossible.” Younger builders have to rely on drawings issued by museums and other sources. “Drawings are great,” Phillips says, “but they don’t share the same amount of detail. Everyone will come away from the experience of an old instrument with a personal reaction to it. There’s nothing like the old ones.”

In recent years, Phillips has had several opportunities to get really up close and personal with “the old ones,” in the comfort of his Berkeley workshop. Since 2000, a private collector has been entrusting him with the restoration of antique instruments acquired at European auctions. Phillips is now working on the fourth and fifth such harpsichords that he has restored, both large, French instruments from the early decades of the 18th century. Before that, he was privileged to restore specimens from the first half of the 17th century, instruments that had originally issued from the workshop of the Ruckers family in what is today Belgium — the “Stradavarius” of harpsichords, to use a somewhat strained analogy.

“When I started doing this, all you needed to access these collections was a note from your mother,” Phillips quips. “Now, it’s almost impossible.”

To Phillips, restoring one of these old instruments means getting it into good playing condition as well as bringing its painting and decoration back to something resembling its original state. This sort of restorative work raises the hackles of some museum curators. “The problem with artifacts,” says Phillips, “is that they are artifacts.” Museum people aim to keep the instruments stable, he explains, treating them as physical records that should remain in their current states without further intervention. “Restoring and cleaning old instruments will damage evidence — and ‘evidence’ is the key word” to curators, says Phillips. So much of a harpsichord is ephemeral: the quills that pluck the strings, the strings themselves, the cloth that’s glued to many surfaces of the instrument, the glue itself. To make one of these old instruments play again destroys all these fleeting remnants of an old instrument. That’s what worries the curating sort.

Yet there are limits to the reasoning of the museum culture. Without restoration, the sounds of these old harpsichords, arguably their most important feature, can’t be assessed. Moreover, many of the instruments that have come into Phillips’ shop have suffered at the hands of past restorers, who have already all but obliterated the original ephemera, covering the old instruments in wholly new garb. The changes that the instruments have gone through are not necessarily due to incompetence or dishonesty, but rather to different ideas about the inherent value of antique harpsichords that marked previous generations of restorers. In these cases, Phillips aims to strip away the anachronisms and return the instruments to their earliest-deducible state. Still, the process remains a delicate and stressful one, as Phillips relates. “At some point, it comes to this: Here is an antique instrument, and I walk up to it with a chisel in my hand.” The work starts from there.

Peeling Back the Past 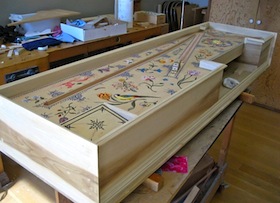 One of Phillips’ recent projects involved a Ruckers harpsichord built in 1627, which had been “spruced up” in the 1920s by a salesman who hoped to make the instrument fit a then-current idea of what harpsichords should look like. He took an instrument that had originally been black and applied green crackleur (a painting technique intended to look old and cracked, a common trick of people who forge antiques). To anyone who truly knows 17th-century harpsichords, the color was all wrong, so the choice was obvious to Phillips and his collector-employer: Restore the instrument’s decoration as well as its structure. It required a good bit of forensics, but by staring at interior glue lines and by carefully removing the green paint, Phillips eventually determined what the instrument’s state was at around 1701. He used that as his guidepost in the restoration process. But he left just a little bit of the 1924 decoration on the spine, the back of the instrument that most people never see. “That decoration had become part of the instrument’s history,” Phillips explains. That history, as well as the instrument’s earlier state, deserved to be preserved, in his estimation.

In addition to his restoration work, Phillips keeps up his own building of instruments, producing a steady stream of harpsichords for professionals and amateurs alike. The waiting list for his expensive instruments is long. He builds harpsichords of all shapes and sizes. “Harpsichords are like cuisines,” he often jokes, as he is explaining to someone that there are prominent Italian traditions, French traditions, German traditions, and English traditions, among others. And if California cuisine is famous for incorporating many national styles of food in its daily offerings, then it’s no wonder that Phillips builds in all these styles. John Phillips is, without a doubt, the master chef of California harpsichord building.