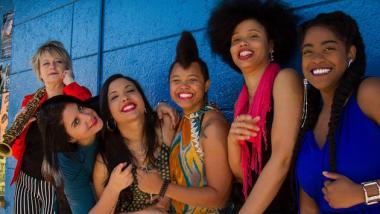 I knew jazz’s glass ceiling had started to shatter when I saw the two Janes on the Monterey Jazz Festival program.

Let me explain. For some 30 years, two of the world’s finest soprano saxophonists, Jane Ira Bloom and Jane Bunnett, happened to share a given name, and of course the female gender. If one got booked at a festival, it was a safe bet that the other needn’t waste her time pursuing a gig there, a ridiculous state of affairs given that they’ve created utterly distinct bodies of music (and a situation largely unfamiliar to, say, similarly disparate saxophonists David Sanchez and David Binney).

Presenters seemed to feel that a few women bandleaders on a roster covered the female base, and that two female saxophonists, let alone soprano saxophonists, would oversaturate the market. The Monterey Jazz Festival was hardly immune, and not so long ago you had to scan the program carefully to find a bare handful of women instrumentalists (it’s a very different situation for female vocalists).

In 2016 the MJF presented four women-led bands, which was an improvement on previous seasons. Last year there were five. But this year’s festival, which runs Sept. 21–23 at the Monterey County Fairgrounds, features at least 15 ensembles led or co-led by women players, starting with the debut of the latest edition of the Monterey Jazz Festival On Tour Band, which includes trumpeter/vocalist Bria Skonberg and tenor saxophonist Melissa Aldana. (The sextet’s 2019 tour hits UC Berkeley’s Zellerbach Hall on April 3 and Sonoma State’s Green Music Center on April 4.)

Breaking the unofficial Janes embargo, Bunnett, who’s also a fine flutist, performs 7:30 p.m. Friday in Dizzy’s Den with her all-women Cuban band Maqueque featuring drummer Yissy Garcia, a rising bandleader in her own right, while Bloom’s quartet with pianist Dawn Clement plays the intimate Pacific Jazz Café at 9 p.m. on Friday. In a year marked by the #TimesUp and #MeToo movements, the breakthrough is not unrelated.

“I felt this would be a good year to come out with all the guns blazing,” says Tim Jackson, the festival’s longtime artistic director. “There so many incredible women-led groups. I’ve presented Jane Ira Bloom at Kuumbwa,” the Santa Cruz jazz venue that Jackson co-founded and continues to run, “but how come I’ve never presented her at Monterey? I missed this one. First and foremost, I want to present women in strong, meaningful ways — the right venue with the right project at the right times. We’re not only presenting Bloom with her group, she’s playing duo with pianist Fred Hersch, something they have a lot of history doing.”

More than sheer numbers, what’s impressive about the MJF program is that the women represent a broad and deep cross section of the contemporary scene. And since women bandleaders are often more likely to be open to collaborating with other talented women, many of the ensembles feature world class sidewomen. Israeli tenor saxophonist/clarinetist Anat Cohen performs with her Tentet featuring Australian-born trumpeter/composer Nadje Noordhuis and guitarist Sheryl Bailey 7:30 p.m. Sunday on the Jimmy Lyons Stage.

Jackson’s strategizing to make the most of artists booked is apparent with this year’s artists-in-residence, saxophonist Tia Fuller and trumpeter Ingrid Jensen, who are both performing with their own bands and leading a tribute to the epochal pianist/composer Geri Allen. Allen died unexpectedly last year at 60, and had carved out an important niche at Monterey in recent years, presenting captivating productions like 2015’s “Erroll Garner Project: Concert by the Sea,” and 2011’s jazz/tap summit “The Dazzler” with tap dancer Maurice Chestnut. The tap master is also part of Fuller and Jensen’s tribute to Allen “The Fierce Nurturer: Life of a Song Through Spirit,” with multi-Grammy Award winning drummer Terri Lyne Carrington, who was recently appointed founder and director of the Berklee Institute of Jazz and Gender Justice.

Jensen raised several questions about gender and equity in a recent conversation, while offering a brief and blunt assessment of the unprecedented number of women artists at Monterey. “It’s about time,” she said. “I’ve been waiting and watching, and there’s still a lot of room for growth. I think Dr. Billy Taylor deserves a lot more credit. When he started the Mary Lou Williams Women In Jazz Festival I thought at first I didn’t want a specific festival for women. But when I got booked, I realized I’m getting paid more than I’ve ever gotten before, and I can afford to hire musicians I couldn’t. That’s an issue too, the gender pay gap that’s been keeping things from happening.”

Fuller, whose critically hailed new album Diamond Cut (Mack Avenue) put her on the cover of the October issue of Down Beat magazine, met Jensen some 15 years ago and they quickly formed a mutual admiration society. They started playing together regularly around 2012 as part of Terri Lyne Carrington’s female-centric Mosaic Project. Fuller remember the first gig vividly because Jensen was breastfeeding her daughter after the performance at the Jazz Standard. “That was really powerful for me,” Fuller said. “Ingrid looked at me like, this is what it is.”

Both Jensen and Fuller have plenty of experience sharing stages with other women, starting with their sisters. Saxophonist Christine Jensen is co-leading their sextet Infinitude at 7 p.m. Saturday in the Night Club, while pianist Shamie Royston plays with Fuller’s quintet Diamond Cut 8:45 p.m. Saturday in Dizzy’s Den.

The presence of so many top-shelf women reverberates far beyond the fairgrounds. Sure, the MJF is just three days out of the year, but the world’s longest continuously running jazz festival packs a huge cultural wallop. The organization runs a year-round jazz educational program in Monterey County schools, a high-school all-star band that performs internationally, and the Next Generation Festival, which draws middle, high school, and college ensembles from around the country every April. As artists-in-residence, Fuller and Jensen have been deeply engaged with the education program all year, and they perform with the Next Generation Jazz Orchestra at 12:30 p.m. Sunday on the Jimmy Lyons Stage.

With more girls starting to play jazz in schools, the importance of role models can’t be overstated. Saxophonist Kristen Strom, a long time faculty member at the Stanford Jazz Workshop, recently received a letter from a young women who wrote to say “Thank you for helping me to realize that I can be part of the jazz community.” Strom has noticed progress on the gender equity front, “but these days I mostly notice if there are no women, and I go, Come on! At Stanford we had more women on the faculty and in concerts than ever before. It’s starting to become normal. That’s all I’m looking for. The young women I hear coming up are just stunning musicians.”

Mary Halvorson, one of jazz’s most highly regarded guitarists, plays a benefit concert with Thumbscrew at San Francisco’s Center for New Music on Sept. 20 before the collective trio heads down to the fairgrounds for a 10:30 p.m. set Friday in the Pacific Jazz Café.

Flutist/composer Jamie Baum used the Monterey date to anchor a West Coast tour with her East Coast septet. Presenting the spiritually charged music from her new album Bridges (Sunnyside), Baum plays the Redwood Jazz Alliance in Arcata (Sept. 20) and Santa Clara University (Sept. 21) before hitting the fairgrounds on Sept. 22. Since the festival doesn’t depend on exclusivity with artists, Jackson welcomes the side gigs. “I try to do the bookings early enough so that artists can build a tour,” he said.

The question is, once the glass ceiling has been shattered, does it stay broken? Jackson notes that there are more women in leadership roles in the MJF organization than ever before, from Executive Director Colleen Bailey to the marketing and development directors. When it comes to booking, he’s more interested in setting women up to make an impact than on hitting target numbers.

“I think it’s most important that we present women in meaningful roles; more than that 46 percent are women bandleaders,” Jackson said. “It’s less about a numbers game than about real meaningful value, that we were able to bring their full band out, or present them as showcase or commission artists. That being said, I think you’ll continue to see lots of women featured prominently.”

September’s Best Jazz and Beyond Around the Bay

Our top picks for upcoming local gigs featuring jazz and other great music from around the globe.