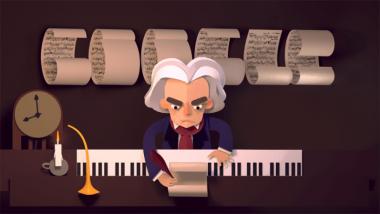 In the heartbreaking absence of live music this season, SFCV has been doing its best to provide you with a regularly updated guide to streaming music and recommended music videos. If your yen for even more musically oriented fun still isn’t satisfied, let us recommend some of our favorite online pastimes from the Google Doodle archives. The search behemoth invests considerable resources into developing a daily “Doodle,” usually apropos of an event or anniversary that occurred on that day in history.

Most are simple illustrations, some are elaborate animations, and some of the very best are interactive games.  Here are Doodles with musical themes, in inverse order from when they first appeared. Click on the link or image to go a page where you can play with the Doodle, learn more about the subject, and get information about how the Doodle was put together.

Take a few minutes to learn about the history and rich traditions associated with the Mbira, Zimbabwe’s national instrument, and learn to play a tune on a digital facsimile. Addictive!

This Doodle was the first ever to incorporate artificial intelligence into the interaction. According to Google, it is “an interactive experience encouraging players to compose a two-measure melody of their choice. With the press of a button, the Doodle then uses machine learning to harmonize the custom melody into Bach’s signature music style (or a Bach ’80s rock style hybrid if you happen to find a very special easter egg ...). Explore!

This lovely animation is set to Bohemian composer Smetana’s Vltava tone poem from his Má Vlast (My homeland) cycle. The piece has been compared to watching the Vltava River flow from its source in the mountain through the city of Prague, and the Google team captured that feel in the artwork. Learn more about the composer and enjoy this interpretation of his iconic work.

Get a text and video intro to hip-hop history and culture and then try your hand at creating your own instrumental break with a pair of interactive turntables, a virtual box of records to sample, and a tutorial about how to put it all together.

The influential filmmaker, animator, and visual artist was a pioneer in matching images with music. Read about his tremendous influence and spend a few minutes building your own music-and-image artwork. Hypnotizing! 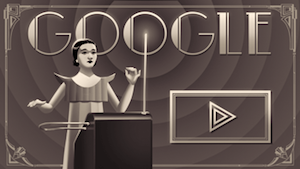 Here’s your chance to fool around with a virtual theremin to your heart’s content. This Doodle celebrates theremin virtuoso Clara Rockmore, who helped the eponymous inventor refine his touchless sound generator into a quintessential electronic instrument capable of holding its own in concerts with great symphony orchestras. 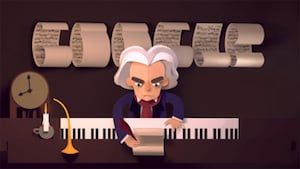 Test your note-reading skills and solve a puzzle concerning the scattered sheet music for Beethoven’s best-known symphony. Kill a few minutes helping Ludwig van B. avert a catastrophe. Along the way you might pick up a new fact or two about the composer.

Bartolomeo Cristofori may not be well known outside the world of piano-history buffs and keyboard technicians, but his contribution to music history is undeniable. Learn more about his invention of the hammer mechanism that paved the way for modern keyboards. The Doodle interaction is pretty simple, but the background info is fun and interesting.

I’m including this little animation from a Thanksgiving long past because I was involved in the process of making it by way of playing guitar and mandolin for the soundtrack, along with other members of the Hillbillies from Mars, a Bay Area band that plays a range of traditional folk music. We worked with the Google creative time early in the process to choose a tune and work out how the music would fit with the storyboard. Later we met with them in a Stanford music studio to record the piece in real time to the rough cut of the animation. The team then tweaked their animation to fit with the live recording and completed the visual components. It was a lot of fun to do, and we were thrilled to have our one minute and 24 seconds of fame.

The sweet animation set to Debussy’s Clair de Lune looks simple and old-fashioned — the creator says he was aiming for a look inspired by Andre Helle, a French illustrator who was a contemporary of Debussy’s — but there’s a high-tech backstory about how it was created that’s fun to read.

You probably don’t know his name, but you’ve seen his work on numerous classic-film credit sequences, usually tied to great music. His credits include The Man With the Golden Arm, North by Northwest, Anatomy of a Murder, Goodfellas, and many more, and his style has been widely emulated in newer films like Catch Me If You Can and on the Mad Men TV series. This animation isn’t interactive, but the great Dave Brubeck soundtrack and clever pastiche of images make it worth spending a few minutes with.

Switch on with this intriguing Doodle. Learn all about Robert Moog’s groundbreaking synthesizer, then play with the interactive portion to twiddle some knobs and invent some new tones, create your own music, make a recording, and share the results.

The story of singer Freddie Mercury and rise of the band Queen made for a gripping film in Bohemian Rhapsody. There’s no interactive component in this Doodle, but the animated sequence is great, and there’s a nice tribute to him contributed by bandmate, guitarist and physicist Brian May.

This celebration of pioneering electric guitarist Les Paul was one of Google’s biggest hits ever, with over 870,000 participants recording 51 years’ worth of music on the clever interactive guitar Doodle. Alas, the sound component is the victim of technical obsolescence (Flash), and no longer works on most browsers, but you can still strum the guitar strings and read about Les Paul.

A simple animation celebrates the one of the greatest dancers and creative minds of the 20th century. The Doodle itself is brief, but the explanation about how the team “fit seven decades of American innovation into 15 seconds is worth the visit. 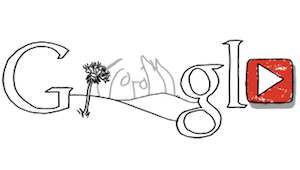 This was Google’s very first animated video Doodle. The creator describes his intent this way: “The old saying, ‘a picture is worth a thousand words’ still rings true, so I hope a moving picture will help me adequately — and simply — thank John for the memories.”

The Perplexing Upside of Coronavirus’s Devastation of Live Performances

Great music is blossoming and readily available in spite of closures and restrictions.