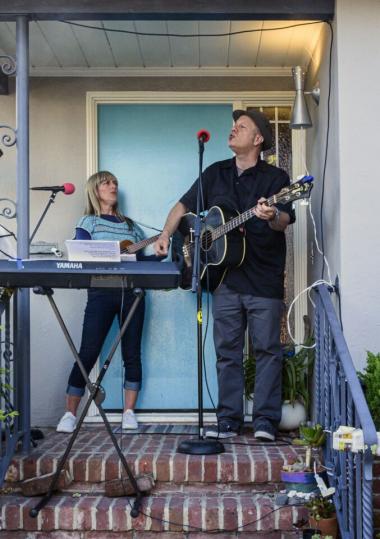 For all of us here at SFCV and probably most of you, one of the biggest impacts of the coronavirus pandemic has been the death of live music. There’s been some consolation by way of terrific streamed music via multiple platforms, but nothing replaces the thrill of seeing and hearing singers and instrumentalists make magic up close and personal.

A new tradition — regionally and around the country — is providing some joy for music lovers in the form of “porch concerts,” where local musicians set up and perform informal shows on their own front steps, while neighbors and friends gather at a safe, well-masked distance to enjoy the sounds without any digital interface. While the idea of porch-concerts had been gaining interest long before the current pandemic, the shelter-in-place order has really fostered its growth, as folks realize the very real value of finding magic in their own neighborhoods.

This phenomenon has taken off in my own hometown, the “Island City” of Alameda, where there are as many as a dozen such concerts on a given Friday evening around 6 p.m. Most Fridays our family tries to catch one or two shows on the hoof, but this past weekend my wife and I bicycled around to see parts of four different concerts. It was inspiring to hear so much great music right in our own backyard.

I got involved with Alameda Porch Music in the run up to the first concert on March 20 and offered to set up the process for the future to make it easier for all to post and find locations. I love homegrown arts, and being part of the community. I created online forms and maps to connect with people, and am now the only organizer behind the scenes.

Now I also coordinate with frontline healthcare workers who want to see music at the end of their long shifts, remind people about updates to the SIP regulations, and thank the community for helping keep these events safe and ongoing! I sometimes have to write to press outlets who like to report on the good news locally, but can be unaware that because gatherings aren’t allowed and are a health liability, this is not a public event in the pre-virus sense. I hope someday to have a concert where we can be in the same place at the same time!"

So how does it work?

The performers set up on their own front porches or driveways, sometimes purely acoustically, sometimes with a modest P.A. system or small amps to boost the sound. Most everyone is streaming their shows via Facebook, and most provide virtual tip-jar links so that listeners can show their appreciation. For most of the acts, the motivation seems to be simply connecting with friends and neighbors though live music — not quite so up close, perhaps, but definitely personal. The audience stands or sits on the sidewalk — or even in the street in quieter neighborhoods. Individuals and family groups maintain physical distance from others in the well-spaced crowd, and in our experience, nearly everyone — sometimes even the performers — is masked and conscious of good protocols.

Sets typically run from 45 minutes to a bit over an hour, but a few performers provide the equivalent of a full concert and play until dusk.

Singer-songwriter Deborah Crooks and her partner Kwame Copeland have been in on the fun from near the beginning. According to Crooks:

We’ve had a great time doing the weekly porch concerts. The first week of the shelter in place order in the Bay Area, a friend tagged me on Facebook in response to a post in Alameda Peeps [community bulletin board] by Jeewon Kim Serrato noting it would be nice for Alameda musicians to play or sing on their porches. She was inspired by the footage of people singing in Italy. I was very enthusiastic about it having played porch fests before and having already canceled a gig that week (and like all musicians grasping what this meant for the rest of the calendar) and signed us up. She and another resident, Irene Nexica, got a good response and put together an event notification.

Kwame and I set up on that Friday (after I vetted with our immediate neighbors) and were really cheered by the response of the local residents. Some folks bring their kids each week and dance on the sidewalk. Sometimes the local taqueria cooks stand on the sidewalk outside their restaurant to listen. We livestream it too, but it’s mainly great to be entertaining people in person and bringing together our local community that much more."

She adds, “I also tagged /encouraged a bunch of musicians in other areas to participate and do the same in their own towns. It felt like, ‘oh good, here’s something we can do that will help a little.’”

Multi-instrumentalist Dawn Roorda and her fiddling daughter Maddy have been hitting the porch since the beginning of the SIS order playing bluegrass favorites, old fiddle tunes, and newer songs in a roots-music vein. She says, “We have been loving playing together. We were inspired to join when I first saw the porch concert group start on Facebook. We really had no idea what it would entail, we just threw some of our favorite tunes together. And now here we are, eight weeks later, and love working to pull a set together each Friday.” According to Maddy, “it’s been amazing that even during what would be a lonely time for so many, it feels like a new community that loves bluegrass music has formed in our front yard every Friday.” As they sum it up: “It is so welcoming, and so unexpected.”

For Tina O’Grady and her family, all musical but all engaged in disparate musical outlets, getting ready to do a porch concert was a chance to explore music-making as a family. She describes their journey to the front porch:

Seeing as how we have three musicians in the house, people kept asking us “when are you going to hold your own concert?” While both of our kids are pretty decent musicians, they are both deathly afraid of performing in a small setting. Playing in a large school band or drum corps is one thing, but playing with your mom and dad on your front porch is entirely different. I made sure we got ample rehearsal time over the next two weeks and we came up with seven songs we could perform without completely falling apart.

I only spread the word to a couple groups of friends, but between word of mouth and the Alameda porch concert map, we had an “audience” of at least 25 people at the peak moments, including some extremely supportive neighbors who had set up little viewing parties in their yards.

We weren’t that good, and the live FaceTime stream I had running was terrible quality, but we had a blast doing it anyway, and I think if nothing else, it gave people something fun to do outdoors within the constraints of the social distancing guidelines. This was a silver lining of the pandemic, and something my family will always remember.”

Just few blocks away, multi-instrumentalists Miles and Teo Quale might be among the youngest participants in the porch-concert scene in Alameda, but they are certainly no strangers to performing. On their own, with the rest of their musical family in the Barefoot Quales, or with their red-hot bluegrass band, Crying Uncle, the Quale brothers are making a mark with their string wizardry at a national level.

Miles has won numerous championships in fiddle contests near and far, Teo has garnered similar honors on the mandolin, and they have graced stages in concerts and festivals across the country and in Europe, and made an appearance at the Grand Ole Opry last year. They offered a thrilling set from their driveway on Friday night, and listeners were lucky to hear the future of acoustic string music. Miles offered this bit of wisdom about the Alameda event: “The porch fest allows the community to come together and connect safely, even when we’re under quarantine. It also lets artists who are losing work share their music from their homes.”

Musicians Carlo and Rebekah Balboni play in separate Alameda-based bands most of the time, Carlo in the “roughed-up bluegrass” band, The Up and Down, and Rebekah in The Ukemamas, a hard-rocking ukulele ensemble. Although their bands sometimes join forces for shows, the SIP order has given them an excuse to work on music as a duet and as family. Rebekah explains it this way: “It’s been a nice way for the family to have a creative project to work on together. It gives us a sense of purpose during this time when things feel so uncertain. We hope it brings some joy and sense of connection to our sweet little community here in Alameda.”

Judging by the twinkling eyes smiling out from their well-masked neighbors and friends as they dance a safe distance from their porch, they are indeed bringing joy to the community. Let’s hope that this is a trend that catches on in communities around the globe and will continue long past our current crisis. And a gentle reminder that the Alameda events are small gatherings for locals only. If you want to see porch concerts in your own neighborhood, get out on your own porch and make some noise.

A new project engaging scores of musicians in broadcasting tales of the pandemic from around the world is keeping the eclectic composer busy.