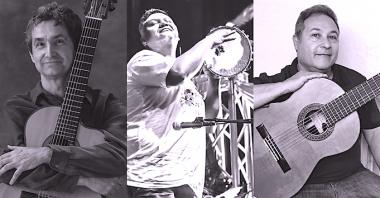 T.S. Eliot had it all wrong. Rather than trafficking in cruelty, April is the month of promise and invitation. The music resounding around the region sings of resurgence, renewal, and reinvention, and rather than carrying portents of decay there’s an alluring mix of memory and desire. In other words, the waters of March have prepared the way for bumper crop of Brazilian music, along with some deep blues and adventurous jazz.

Brasilia-born Berkeley guitarist/vocalist Ian Faquini is a composer of inordinately sad and beautiful melodies, building on the supremely sophisticated sound of his mentor, legendary Brazilian songwriter Guinga. In San Francisco-reared trombonist/vocalist Natalie Cressman he’s found an ideal muse and musical partner who can effortlessly caress Brazilian Portuguese vowels singing lead or harmony and croon his melodies on her horn with understated eloquence. They celebrate the release of their gorgeous new duo album Setting Rays of Summer (Cressman Music) at Oakland’s Sound Room.

The Fraternal Order of the Society Blues | April 13

Jeremiah Lockwood, guitarist and vocalist for The Sway Machinery, celebrates the music and legacy of Piedmont blues great Carolina Slim (aka Elijah Staley) as part of the SF Live Arts at St. Cyprian’s concert series. Not to be confused with an earlier Piedmont blues legend Edward Harris (1923–1953), who also recorded as Carolina Slim, Staley (1927 – 2014) cultivated a following in New York, a city not particularly amenable to blues artists, by performing regularly in the subway for decades. Lockwood came into his orbit at 14 and became something of a protégé. The Fraternal Order of the Society Blues features two fellow Carolina Slim acolytes with Ernesto “Lover Cat” Gomez (harmonica and voice) and Ricky “Dirty Red” Gordon (washboard and voice), a resourceful percussionist, composer, and actor who’s collaborated with Spike Lee, Wynton Marsalis, Public Enemy, Hubert Sumlin, the Jazz at Lincoln Center Orchestra, and the Tedeschi Trucks Band, among many others. 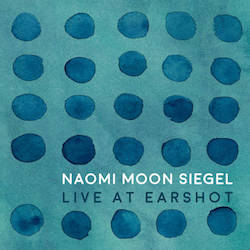 Seattle trombonist/composer Naomi Moon Siegel has developed a consistently captivating body of instrumental music built on stately folk-like melodies, coiled grooves, and lapidary voicings. An active and valuable presence on the Bay Area scene when she was an Oakland resident from 2006–2008, she makes her local debut as a bandleader April 17 at San Jose’s Art Boutiki with her California band featuring rising pianist Christina Galisatus, guitarist Justin Rock, and drummer Michael Mitchell on a double bill with saxophonist Steven Lugerner’s SLUGish Ensemble. She’s celebrating the release of her excellent new album Live at Earshot, which is being released on Slow & Steady, the Bay Area label co-founded by Lugerner. Siegel performs April 18 with the same quartet at Oakland’s Octopus Literary Salon on a double bill with Rice Kings (a duo featuring saxophonist Eli Maliwan and keyboardist Erika Oba), and closes her Bay Area run April 21 at San Francisco’s Center for New Music as part of a Slow & Steady showcase with tuba player Jonathan Seiberlich’s solo singer/songwriter project Jensen Engineering, and pianist Richard Sears performing solo.

Born and raised in the coastal metropolis of Recife, guitarist/composer Carlos Oliveira absorbed the wealth of rhythms that makes the northeastern Brazilian state of Pernambuco such fertile musical territory. He spent some three decades living in the Bay Area, cultivating a close cadre of players versed in his music, and often collaborated with Rio-born guitarist Ricardo Peixoto. On a rare trip back to the Bay Area from Recife, where he returned about a decade ago, he reconnects with Peixoto (who’s got an excellent new album out, Scary Beautiful), Brazilian percussionist Alex Calatayud, and special guests at his San Francisco homebase, the Red Poppy Art House. 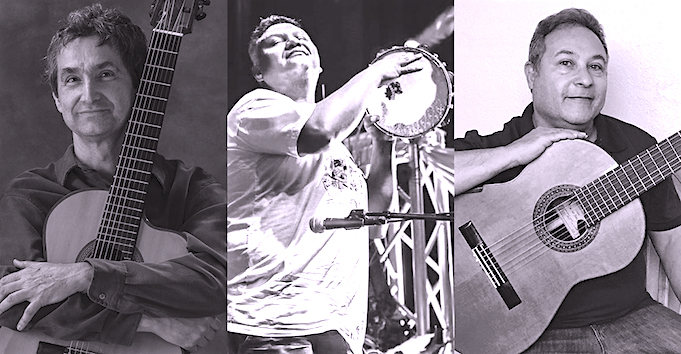 As the last seminal figure from the generation that radically expanded the possibilities for jazz improvisation in the early 1960s, pianist Cecil Taylor closed a bracing chapter in American music with his death last April at the age of 89. Rova Saxophone Quartet marked his passing with an event last year, and seems set to make it an annual event with this concert at CounterPulse. Joined by an expanded cast including guitarists Jean-Paul Bourelly and Henry Kaiser, bassist Jason Hoopes, and drummer Donald Robinson, Orkestrova presents the Steve Adams-arranged reworking of Taylor’s epic album Dark to Themselves (Enja), a concert recorded in 1976 featuring one uninterrupted coruscating performance. The Fly! Fly! triple bill also features Lisa Mezzacappa and Jason Levis’s bass and percussion duo B. playing excerpts from Taylor’s solo live album Air Above Mountains (Inner City) recorded two months later, and Positive Knowledge, the duo of Oluyemi and Ijeoma Thomas on reeds and vocals, respectively, presenting the poetry of Cecil Taylor and original works.

I wasn’t familiar with Australian-reared, New York pianist Ben Winkelman until receiving a copy of his recently released fifth album Balance (OA2 Records), which left me determined to catch him in performance. A startlingly impressive trio session focusing on his original tunes, the album brims with ideas and his love of Afro-Caribbean rhythms. Joined by the great New Zealand-born bassist Matt Penman, who spent a dozen years anchoring the SFJAZZ Collective, and the commanding Haitian-American drummer Obed Calvaire, a current member of the Collective, Winkelman plays with an idiosyncratic rhythmic feel informed by his love of Latin music and early jazz idioms. He brings the same stellar trio to San Francisco’s Black Cat for a two-night run.