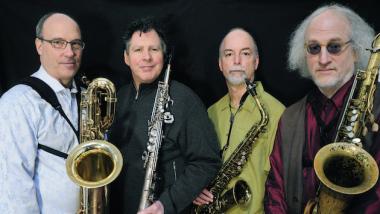 For an individual, hitting 40 can be a moment of angst or affirmation, reflection or rebellion in the face of a midlife milestone. But for an ensemble, concluding a fourth decade is a signature accomplishment that calls for a major celebration. Instead of making a big deal marking the group’s 40th anniversary, Rova Saxophone Quartet is going about its business, releasing a magnificent album of new music, In Transverse Time (Victo), and playing an SF Live Arts concert Friday, May 4 at St. Cyprian’s in San Francisco.

Rather than engaging in an overarching retrospective celebrating its manifold accomplishments, this singular Bay Area institution is staying on mission, moving forward. Rova gathers no moss. Over the decades the group has occasionally revisited material, particularly John Coltrane’s volcanic free-jazz sojourn Ascension, but the quartet has defined itself by applying an array of improvisational strategies to an ever-expanding body of new music.

Rova performances can reach the soaring lyrical intensity of bel canto, the rough-and-tumble tumult of a garage rock band, or the insistently patterned matrix of a minimalist chamber work, sometimes in the course of a single piece. While they’ve refined their practices over the years, the sense of discovery the quartet brings to the bandstand turns every performance into a revelatory ride.

While serving as a laboratory for their own compositional voices, the quartet has also engaged in extensive collaborations with some of the era’s leading composers and improvisers, from Muhal Richard Abrams, Henry Threadgill, Jack DeJohnette, and Satoko Fujii to Terry Riley, Alvin Curran, Henry Kaiser, and Fred Frith. In both realms, Rova explores what trombonist/composer George Lewis, calls “the hyphenated space between improvisation and composition.”

What’s extraordinary about Rova isn’t just the breadth of their musical investigations. It’s the immeasurable but palpable depth of the relationships embodied in the ensemble. “It’s a real luxury to have this group to rely on, for the foundation to be so firm,” says tenor and soprano saxophonist Bruce Ackley. “No matter what kind of adversity there is in our personal lives, this is a running theme that stays solid. I think Rova as an institution has provided a solid rock that we’ve been able to rely on.”

“I like dealing with time and I developed a note scheme based on a page of four voice chords and four colors,” Raskin says. “Everyone picks a color and goes through one note in each chord, and you have your own melody line that’s created. I also wanted to deal with getting softer, as soft as possible, so it opens on a decrescendo.”Founded in 1977 by Ackley, Larry Ochs (tenor and sopranino sax), Jon Raskin (baritone, alto, and sopranino sax), and Andrew Voigt (alto and soprano sax), Rova took its name from the first letter of each musician’s family name. Steve Adams, who’d been a member of the Boston-based Your Neighborhood Saxophone Quartet, stepped in after Voigt left the group in 1988, and that’s been the lineup ever since, though the quartet often expands for performances and recordings.

In Transverse Time is Rova’s first release exclusively featuring the quartet since 2012’s A Short History (Jazzwerkstatt), and as on that album, all of the pieces are by the saxophonists. Raskin’s near-title composition, “A Leap of Faith in Transverse Time” is a typically Rovaian query into sonic architecture that gently deconstructs a decrescendo.

“I like dealing with time and I developed a note scheme based on a page of four voice chords and four colors,” Raskin says. “Everyone picks a color and goes through one note in each chord, and you have your own melody line that’s created. I also wanted to deal with getting softer, as soft as possible, so it opens on a decrescendo.”

Ackley’s opening tune, “Oxygen” is a conceptual riff inspired by Morton Feldman’s music, particularly his “Durations” series. Intrigued by the look of Feldman’s scores and their numbering schemes, he received a jolt of insight while working in the studio a few years ago when guitarist Henry Kaiser started “talking about phases, and a lightbulb went off,” Ackley says.

“I came up with an idea where you play a pitch as long as the number is. I made some number schemas, a method for making choices about when to go from one to another and overlaid some options. I wanted a piece that was very free with this superstructure, with a very open, pitchy kind of sound.”

No work better captures Rova’s borderless sensibility than Adams’s The Dark Forest Suite, a distilled, six-movement piece inspired by the all-male Basiani Choir from the Republic of Georgia. Adams borrowed the titled from a series of toasts at a vodka-powered after-party during Rova’s 1989 tour of the Soviet Union, when a Georgian poet repeatedly declared “Let’s all go into the dark forest!” By steadily commissioning new works by composers outside the group, Rova’s sylvan odyssey has taken on unprecedented proportions.

“I don’t know of any other group that has really done that explicitly, playing the works of other composers and making that an integral part of what they do,” George Lewis, the Columbia music professor, trombonist, and MacArthur “Genius” Fellow, told me in an interview several years ago. He noted parallels between Rova and another signature Bay Area ensemble, Kronos Quartet, a group “that took a similar path in terms of notated or composed music. But nobody has been doing it for as long as Rova, with their particular range of interests.”

Kronos does provide a fascinating counterpoint to Rova, in that the former has tapped into bountiful resources and built enviable support structures, while the latter exists on a shoestring as a DIY operation in booking, management, and grant writing (often spearheaded by Larry Ochs). The fact that Rova has accomplished so much and built such an expansive and resilient community of collaborators speaks to their commitment and to the underfunded nature of improvised music in the liminal territory between jazz and new music.

Ackley isn’t complaining so much as reporting when he says, “We’ve gotten some very good support and we’ve done a lot with a little. In my perfect universe, all the investment we’ve made in the larger community of creative artists would have reaped a lot more.”

As Rova enters its fifth decade, the frustration with limited resources seems leavened by gratitude for uncommon commitment. More than an institution, Rova is a musical organism that accrues knowledge without being imprisoned by experience.

“It’s really been a gift,” Raskin says. “I love ensembles. I love getting deeper and deeper into the questions that arise when you keep playing with somebody. One of the most amazing things is that we’ve never turned into a repertory band. The egalitarian nature of the group has allowed our diversity of opinions to work out for all four players. It’s allowed us to take on things outside of the group, interact with choreographers, film, poets, larger ensembles, and special projects that feed the quartet. We realize how special it is to be able to grow inside an organization. Rova is not the usual kind of thing.” Which sounds like something well worth celebrating.

What if you were confronted with a dozen spirited saxophonists, male and female, embracing a stunning range of pitch and a delightful variety of repertoire? That wouldn’t be too much sax, would it? Not in the case of the Selmer Saxharmonic.