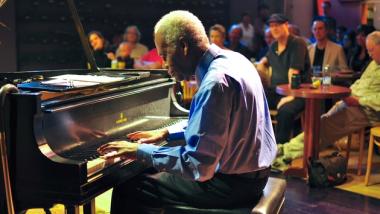 On that recent day, jazz pianist Gildo Mahones died at the age of 88. He is survived by Mary Mahones, his wife of 48 years; daughter Danielle Mahones, an Oakland-based labor and social justice expert and consultant; and seven-year old grandson Rajon Mahones-Ospina.

During the 1950s and 60s, his career was only semi-interrupted by a three-year stint in the United States Army — he stayed stateside and played in an army band. After that, Mahones linked up with French horn player Julius Watkins and tenor saxophonist Charlie Rouse in the Les Jazz Modes quintet. When, in 1959, the group disbanded, Mahones joined trombonist Bennie Green. The two musicians were recruited by bassist Ike Isaacs to accompany what was a new, but soon enormously popular vocal group, Lambert, Hendricks & Ross (later Lambert, Hendricks and Bavan). Moving in 1965 to Los Angeles to work with Joe Williams and Harry “Sweets” Edison at the Pied Piper club and with vocalists Lou Rawls, James Moody, Big Joe Turner, and others, Mahones composed, recorded albums, and toured Southern California, Japan, and Europe. Moving to Oakland eight years ago, he continued to perform, including a 2013 appearance with his trio (bassist Glenn Richman and drummer Greg Wyser-Pratte) at the Jazzschool in Berkeley.

His seven-decade career is a testimony to talent and versatility, and more than anything indicates a congeniality that allowed Mahones to adapt to jazz celebrities regardless of their style, temperaments, or work habits.

Improbably, Mahones’s contributions to jazz history might never have happened. After one week of piano lessons at age seven, he decided the piano was not his thing. In a Berkeleyside interview in 2013 with music journalist Andrew Gilbert, Mahones told the story of his return to the instrument after his mother brought an abandoned piano into the family home. “I had been saving money to buy a Brownie camera, selling newspapers,” he recalls. “She took the money and hired two guys to move the piano. I didn’t like that. I used to pass it every day on the way out the door to school every morning and for weeks I wouldn’t touch it. She didn’t say a word.” But when a friend of his stepfather played familiar tunes by Fats Waller and Teddy Wilson — and promised the impressionable young Mahones he’d teach him to play similar songs — Mahones was converted.

In a phone interview, his daughter shared memories about her father and his legacy.

For Danielle Mahones, it’s likely that “Gee, Baby, Ain't I Good to You,” a 1929 song by Andy Razaf and Don Redman and later performed by The King Cole Trio, Billie Holiday, and others, will never again sound the same.

“He’d play in little places in L.A. and when I was there, he knew I loved that song and would play it. He played that like nobody else. Sometimes I’d tell people to shush if they were talking. My mom would say to them, ‘Excuse me, we’re here to hear the music.’”

Indeed, Mahones recalls her deep love for music arising early on. Her father was her piano teacher. “He wanted me to be classically trained because he thought that was a good foundation. Later I argued with him that jazz musicians know so much more about music. With classical music, everything’s written on a page for you, but in jazz you get chord lines and need to improvise for yourself.”

As a father, Mahones applied a gentle but fearless touch, one time barreling onto a school playground to tell a boy who’d been harassing his daughter to “never bother her again.” (“The kid was shaking in his shoes and I don’t remember even seeing him through the rest of school,” she recalls.)

Equally determined during his service in the military, Mahones suffered indignities: once being stopped and questioned at length for no reason by a state trooper while he and his buddies were in full military dress. Later, playing clubs in the South in ballrooms that had a rope dividing the white people on one side, black people on the other, Mahones told his daughter it was simply the way of the times. “He said it was so painful and ugly, but then, he’d just move on past it. When I hear him play the blues, I hear all that pain. It was how he worked it out.”

Asked about her music preferences as an adult, she says, “I still listen to a jazz station in my car. I love hip-hop, I’m a Prince fan. It’s kind of crazy to pick a favorite genre because it depends on the mood I’m in.”

But it’s easy to guess which two of her father’s many stories are favorites. “My dad was playing in a restaurant called Maple Drive in Beverly Hills. The waitress told him that Prince was there and was listening to him. My dad responded to the waitress, ‘Prince of what?’ I asked him, ‘What did he look like?’ He said, ‘He was short.’ That’s how my dad was. He’d played with or before all these amazing people and was so humble. It wasn’t materialistic for him: it was about craft.”

The second story carries a similar, heartwarming tone. “My son was born with spina bifida and was in the NICU for weeks. It was so hard as a new mother to be separated from him,” Mahones says. “There was a piano in the lobby at Kaiser and my dad got on it and played ‘My Funny Valentine.’ It was so adorable: he helped take the pain away.”

A public celebration of Gildo Mahones’s life will be held June 2 at 2 p.m. at the Alena Museum in Oakland (NB: The location is subject to change.)