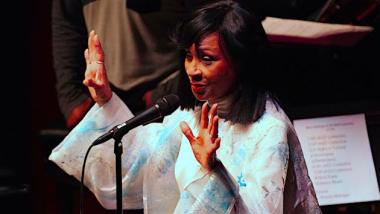 Mary Stallings and Bill Charlap couldn’t keep their eyes of off each other all night. The intermittent musical romance between one of jazz’s greatest singers and the nonpareil New Jersey-based accompanist lit up the Miner Auditorium stage on Friday, the second concert of Stallings’s four-night run at the SFJAZZ Center, where she’s finishing a stint as one of four resident artist directors (along with pianist Vijay Iyer, singer-songwriter Rosanne Cash, and bassist Christian McBride).

With the supremely musical drummer Kenny Washington wielding his brushes with caressing precision and San Francisco-reared bassist Peter Washington (no relation to Kenny) supplying a big, bouncing foundation, Charlap’s trio provided something far beyond sympathetic support. The connection between Stallings and the band gave the veteran San Francisco singer the freedom to perform from the sweet spot where the musical conversational flows with convivial two-glasses-of-wine ease.

At 78, Stallings has entered territory that’s largely uncharted. Her voice sounds remarkably lithe and strong, and her gift for blues-tinged phrasing links her directly to matriarchs Billie Holiday and Dinah Washington.

The only precedent for a world-class jazz vocalist sounding this good closing in on 80 is Ernestine Anderson (the extraordinary Sheila Jordan is still going strong at 89, but she’s a very different kind of jazz singer). Considering how relatively little Stallings has recorded, her performances feel like precious, ephemeral experiences, and she made the most of her time with Charlap’s trio, a unit that’s been touring and recording together for more than two decades.

For much of the 90-minute concert, Stallings kept her body angled toward the piano and the Washingtons literally had her back. Maintaining eye contact and often exchanging encouraging remarks at particularly pleasing interactions, she and Charlap allowed the audience to join a communion that embodied jazz’s full potential as an art form of intimate, spur-of-the-moment exchanges. Songs about dreams and eyes figured prominently in the evening’s program, starting with a brisk and seductive take on Bernice Petkere’s standard “Close Your Eyes.”

With a sense of swing as sure and compelling as any singer in jazz, Stallings turned the trifle “Me Myself and I” into a rhythmic Parkour. She sailed through Duke Ellington’s “I’m Just a Lucky So-and-So” and the Gene de Paul and Don Raye standard “Star Eyes,” luxuriating in her warm lower register. But it was the ballads that elevated the evening from classy entertainment to the sublime.

Watching Stallings and Charlap interact on a molasses-paced rendition of “Darn That Dream” felt like a time-lapse film of a rose blooming. On “But Beautiful,” they approached time-slowing Shirley Horn territory, with each note and syllable hanging pregnant in the air.

Stallings featured Peter Washington on a high-wire rendition of “Body and Soul,” a naked bass/vocal duet that accentuated the lyric’s abject plea. The encore was equally breathtaking. “September In the Rain,” usually sung up tempo from a brisk trot to a sprint, took on a wistful, nostalgic air as Stallings and the trio slowed it down to a delicious crawl. For the age-defying Stallings, spring is here and September sounds glorious.