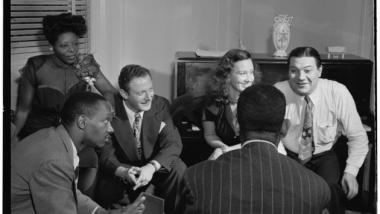 A pianist and improviser possessing a staggering array of gifts, Mary Lou Williams (1910-1981) was one of only a handful of jazz artists who played a central role in the advent of both the swing era and bebop, the modern jazz movement that radically expanded the music’s rhythmic and harmonic vocabularies in the 1940s. As a composer, arranger, player, and mentor, her influence was pervasive and enduring, and her position in jazz’s pantheon is uncontested, albeit under-recognized.

Trombonist/arranger Melba Liston (1926-1999) is less remembered today, but she was a similarly singular figure in the golden age of post-World War II jazz as the only female horn player to perform and record with definitive big bands led by Gerald Wilson, Dizzy Gillespie, and Quincy Jones. She occasionally took on some writing assignments from Williams, and the two artists formed something of a mutual admiration society, recognizing in each other their sui-generis status as women contributing at the highest level in jazz at a time when female instrumentalists were anything but welcome.

With more women visible on the national jazz scene than ever before — about 40 percent of the instrumentalists voted top honors in the 2018 Jazz Journalists Association Jazz Awards are women — one might expect the work of these invaluable foremothers to be more accessible, but it’s a special occasion indeed when their music is widely featured.

The Bay Area ensemble Mary Lou’s Apartment was created to focus on the compositions and arrangements of this singular pair of brilliant African-American women. Sunday night’s packed concert at Berkeley’s Freight & Salvage wasn’t the band’s debut, but the ensemble delivered a crisp and extravagantly engaging program at a major venue, more than rising to the occasion. Co-founded and co-led by Oakland multi-instrumentalist Mwamba Blakwomyn (on bass) and Berkeley trombonist Pat Mullan, the 13-piece, all-women ensemble alternated between Williams and Liston tunes and arrangements, with some well-chosen outside material to provide more perspective on the women’s work.

The concert opened with “Shafi,” an obscure piece the Williams wrote for altoist Shafi Hadi (remembered primarily these days for his work with Charles Mingus). Georgianna Krieger, one of the band’s primary soloists, delivered the sinuous theme with an urgently searing alto tone, while trumpeter Rachel Doolittle offered an incisively puckish response. With the dance floor open, Williams’s swing-era standard “Roll ‘Em” coaxed a small but well-practiced contingent of couples onto the floor, a welcome reminder of jazz’s essential role as social music.

Liston is best known these days for her long-running collaboration with pianist/composer Randy Weston (who’s still performing at 91), and MLA introduced her music with a lush arrangement of Weston’s classic jazz waltz “Little Niles.” Her piece for tenor sax great Ben Webster, “Ben Loves Lu” turned into a luscious showcase for the big, burnished sound of tenor saxophonist Barbara Hunter.

Christy Dana, the band’s music advisor, took the stage to conduct a romping version of “Miss D.D.,” Williams’s character study of Doris Duke. Propelled by Jonnette Newton’s swaggering baritone sax, the New Orleans-tinged arrangement made the jazz-loving heiress sound like a whole lot of fun. Deborah Tisdale added another dimension to the band with her warm, confidently swinging vocals on Williams’s hit “What’s Your Story, Morning Glory?” and “Act of Contrition,” an excerpt from Mary Lou’s Mass set to a buoyant groove that spoke more to the pleasures of sin than morning-after regrets.

Tisdale would have sounded glorious on a sumptuous arrangement of Duke Ellington’s spiritual “Come Sunday,” but the mutes-and-flutes arrangement, one of the evening’s highlights, revealed Newton as a soul-steeped crooner on her baritone sax. Another highlight was the brisk and efficient “Chunka Lunka,” an unknown tune by Liston that Mullan discovered in her archives at Columbia College Chicago.

The concert closed by pulling back for a big picture view of the scene in which Williams and Liston were embedded, with a dramatic version of Monk’s “Round Midnight” providing a showcase for Baker’s melodic drumming, and a lapidary distillation of Neal Hefti’s Count Basie arrangement “Pensive Miss,” featuring Doolittle’s burnished trumpet.

With so much more music by Liston and Williams to explore, Mary Lou’s Apartment is just starting to settle into its richly appointed digs. It’s a wonderful place to spend some time, and the band next performs a show for dancers at the Terrace Ballroom in Oakland.

The singer-songwriter brings the music of her latest album to Berkeley’s Freight and Salvage.