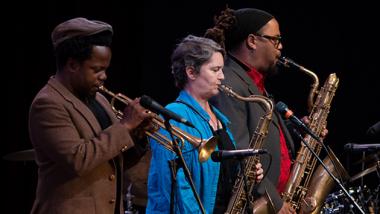 Sandwiched between the glamorous SFJazz juggernaut and the storied sylvan idyll of the Monterey Jazz Festival, the Stanford Jazz Festival tends to fly under the radar. Tucked away on the Stanford campus, the event unfolds without muss or fuss over the course of six weeks (June 22 – August 4), presenting bona fide jazz stars and undersung veterans, rising young players and nonagenarian masters.

With general seating at most shows and a relaxed vibe that flows from the familial atmosphere of the Stanford Jazz Workshop, which produces the concert series, the festival is an essential showcases for jazz luminaries who otherwise don’t often perform in the Bay Area. That said, the opening weekend kicks into high gear Saturday with Berkeley tenor sax star Joshua Redman, an artist who doesn’t have a visibility problem.

Bringing an all-star quartet featuring pianist Aaron Goldberg, bassist Rubuen Rogers, and drummer Greg Hutchinson to Bing Concert Hall, Redman is returning to familiar territory. He’s done several week-long stints on faculty over the past decade, but his ties to Stanford were forged in the mid 1980s when he enrolled in the Workshop more to hang with his Berkeley High Jazz Band buddies than to buckle down and practice.

He still vividly recalls getting a velvet-gloved smackdown from saxophone great John Handy, “who basically said, dude you can’t play. Now, I knew I couldn’t play, but that’s still not easy to hear. And I don’t know what I did with it. It’s not like I went home and started practicing. But I came out with a sense that jazz is hard, a sense of how much of a novice I was. I also remember having a good time, the overall relaxed vibe and a sense of family and community. Jim Nadel has always fostered that.”

Jim Nadel was a young alto saxophonist and recent Stanford grad when he founded the Workshop in 1972. A regular at the Stanford Coffee Shop’s Monday-night jam sessions, he wanted to create a forum for musicians to share information. “Many of the same musicians who were jamming on Monday got together the next night to talk about the music,” says Nadel, who still runs the Workshop and Festival. “We would exchange recordings and talk about our different approaches and how to play and how to practice. Back then there wasn’t a lot of jazz education material available.”

The Workshop was mostly a low-key local affair during its first decade, but when Stan Getz moved to San Francisco, Nadel recruited the tenor sax legend to join the Workshop’s faculty in 1982, turning the educational institution into a national force. There had always been a performance component, but the presence of eminent players transformed the Workshop into an important concert presenter. These days several generations of players have moved through the ranks, growing up in the program, returning as faculty and featured performers.

“The festival springs out of our educational program,” Nadel says. “We gather all these great teachers to interact with students of all ages. We get the artists in residence here for a week or two and they settle in a bit and get stimulated by each other. They get to rest and deliver peak performances. The students get to hear them play, and we welcome the public in to see the results.”

Cuban alto saxophonist and percussionist Yosvany Terry, scion of an illustrius musical clan from Matanzas, was in his early 20s when he connected with saxophonist Bob Murphy at the Havana Jazz Festival in 1994. Murphy had been making regular trips to Cuba to study music, while also keeping an eye out for talented young musicians who might want to teach at the Stanford Jazz Workshop, which he helped to found.

Terry expressed interest so Murphy set the plan in motion, and the following year the saxophonist made his U.S. debut at the Stanford Jazz Festival. Back on faculty again this summer, he performs at Dinkelspiel Auditorium July 30 with his Afro-Cuban Jazz Sextet (and July 28 at the Yerba Buena Gardens Festival).

Long based in New York, Terry is one of the most widely admired and celebrated musicians in jazz, an improviser, composer, and bandleader in the vanguard of a brilliant generation of Latin American musicians who are exponentially expanding the music’s possibilities. He traces his amazing journey directly back to Stanford, including his 2015 appointment as director of jazz ensembles and senior lecturer on music at Harvard University.

“The Stanford Jazz Workshop was the first place that gave me the opportunity to come to the U.S. and be in touch with elders and legends, and I met a lot of people who were going to influence me later, like Steve Coleman,” says Terry, referring to the hugely influential altoist, composer, and MacArthur “Genius” Fellow.

“It was my way to connect with some of the legends of the jazz tradition: Rufus Reid, Tootie Heath, Billy Higgins, Mulgrew Miller, McCoy Tyner, Harold Land. I made these incredible Bay Area connections with people like Orestes Vilató, John Santos, Jesus Diaz, and Rebeca Mauleón. I was still living in Cuba, and to me it was like an incredible injection of jazz. I would come here and that would give me so much information and energy and, going back, I’d appreciate more all the great traditions I had in Cuba.”

“Years ago, we connected with George and Zakir Hussain, and bringing him back had been on my mind a long time,” Nadel says. “His Jazz Journeys concerts have evolved organically. Now it’s got a regular spot in our festival. He’s spent so much time in India and has relationships with so many great Indian musicians. Bickram had contacted George about playing a show in New Jersey in early July, and instead of flying through Europe we had him come the other way, through West Coast. We’re scrappy that way.”

Here are five other only-in-Stanford concerts not to miss this summer.

Born in Jerusalem and raised in Buenos Aires and Tel-Aviv, New York bassist Or Baraket is developing a strikingly beautiful body of music that encompasses folkloric rhythms and forms, combining jazz with influences from South America and the Middle East. His trio features Chilean guitarist/vocalist Camila Meza and Israeli pianist Nitai Hershkovits.

Somethin’ Else: A Tribute to Cannonball, 7:30 p.m. July 15, Dinkelspiel Auditorium

A blazing young band of Workshop alumni led by 22-year-old, South Bay-raised, alto saxophonist Henry Solomon, this quintet celebrates the 90th birthday of alto sax great Julian “Cannonball” Adderley. The prodigious young players are joined by 81-year-old drum maestro Roy McCurdy, whose 11-year-run with Adderley from 1965 until his death, at 46, in 1975 encompassed more than a dozen albums and the huge hit “Mercy, Mercy, Mercy” (by Adderley’s pianist/keyboardist Joe Zawinul). Solomon and McCurdy also perform at San Francisco’s Black Cat on Aug. 2 and Jazz at Filoli on Aug. 5.

Altoist Caroline Davis first gained notice on the Chicago scene, where she was mentored by saxophone greats Von Freeman and Fred Anderson while pursuing a Ph.D. in music cognition at Northwestern University. She’s marking the release of her new album Heart Tonic (Sunnyside), a session inspired by her immersion in the sonic traces of arrhythmic cardiac events.

When I’m not listening to Lee Konitz, my vote for the world’s greatest living alto saxophonist goes to Charles McPherson, an incandescent improviser who performs a few days after his 79th birthday. A product of Detroit’s thriving scene in the 1950s, he’s forged a rigorously personal idiom extrapolated from bebop, a sui-generis approach that served him well during his 12-year run with Charles Mingus.

Though he’s only 33, the extravagantly talented pianist Taylor Eigsti has been a pillar of the Workshop’s faculty for some two decades and his musical relationships all emanate from or flow to Stanford. Starting with a trio featuring era-defining drummer Eric Harland and rising bassist Zach Ostroff, this concert is designed to showcase longtime friendships and budding relationships.

A Panoply of Music at SFJAZZ This Summer

The 36th San Francisco Jazz Festival offers a diverse range of musical acts from all walks of jazz life.