Quarantined far from her Oakland home and facing the loss of more than 100 gigs as the first wave of the pandemic gathered deadly force, Jenna Mammina decided the time was ripe to pursue a long-harbored dream. Putting E.M. Forster’s famous epigraph (“Only connect!”) into action, she’s spent the past year pushing back against isolation with the same improvisational spirit that she takes to the bandstand, turning her twice daily talk show livestreamed via Facebook Live into a sprawling communal endeavor.

A luminous presence on the Bay Area music scene for more than two decades, Mammina is known for bringing a jazz-steeped sensibility to a repertory that ranges unpredictably from Billy Strayhorn and Frank Loesser to Shawn Colvin, Elvis Costello and Steely Dan. She was in Mexico to perform at a series of festivals and conferences last winter when all of her Bay Area gigs started to fall through.

A last-minute trip to visit her mom in Michigan seemed like a good idea “but three days later I was in the ER with COVID-19 and after that I needed to quarantine,” she said. “I thought if I’m ever going to do my show, a dream I’ve had for years, now is the time. So I went live at 11:11 a.m. and then again that evening at 11:11 p.m. and I’ve done so every single day since March 23rd.”

Though she’s been back in California for many months and livestreaming at 8:11 a.m. and 8:11 p.m., Mammina has stuck with the title 11:11 With Jenna out of her love of the numerals, which was the appointed moment at which she and her brothers would call each other. “And doing the show at 11:11 Eastern works for both sides of the country,” she said.

Complete with a funky theme created by innovative music industry executive Dave Love, a frequent guest, the twice-daily livestreams have fostered a far-flung community where the line between audience and participant often disintegrates. The shows have garnered enough support from viewers to help keep Mammina afloat, and she’s turning her one-year anniversary on March 23 into a day-long marathon to keep the show going.

“My mom was my first guest and I think Melanie DeMore was the second,” Mammina said, referring to the beloved Bay Area vocalist who was a founding member of Linda Tillery’s Cultural Heritage Choir. “I’ve got a certain core family group of people who come on, and I’m always open to other ideas. I’ve had bakers, lighting designers, potters, glass blowers. My mom has made pasta sauce. I’ve had musicians from India, Canada, and Mexico who play jazz, pop, R&B, country, and bluegrass.”

Dropping in over the course of the year to watch Mammina’s livestreams I’d been impressed by her ability to draw people out and keep conversations lively. Last week I had the pleasure of appearing on Mammina’s show for an hour-long conversation that ranged from questions about my elementary school-age daughter’s experience distance learning to reminiscing about the long-shuttered Bay Area jazz clubs of the 1990s (we miss you Bruno’s and Kimball’s).

While the show takes up a good deal of her energy, Mammina hasn’t let her music lie fallow. She’s working on several recording projects, including an album of original songs and an album with pianist/arranger David Lahm focusing on his originals and standards by his mother, legendary lyricist Dorothy Fields (whose songbook includes “A Fine Romance,” “The Way You Look Tonight,” “On the Sunny Side of the Street,” and “Big Spender”).  Lahm is a frequent guest on the show. 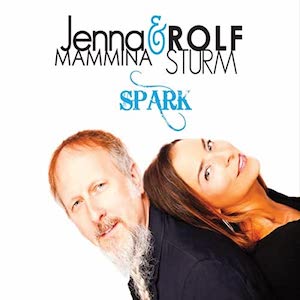 An expert at duo collaborations, she’s been developing new music with guitarist Rolf Sturm, a frequent touring partner with whom she recorded 2015’s Spark. She’s also conducting a series of workshops mentoring vocalists on honing performances, Songs From the Heart, with the next one taking place on Saturday, April 3.

Her latest album is 2019’s Everyone I Love Is Here by Jenna and the Charmers, a collective quartet with drummer Jeremy Steinkoler, Steve Bissinger on guitar and lap steel, and Ryan Lukas on upright and electric bass. She’s itching to get back with the band, but that’s several months away at best.

Like so many musicians, the pandemic has been a financial disaster for Mammina. She lost around 150 gigs, including symphony orchestra concerts, coveted bookings that were just starting to come in for her and Rolf Sturm. The losses have piled up, but Mammina is concentrating on the wins.

“I miss my friends,” she said. “I miss the audiences and the communities that we are a part of all over the world, and the potential to meet new friends. But I am so grateful for this time. There have been some grim moments, some tears. But doing this show has helped me. It’s helped my mom. I’m in my kitchen and I’ve made friends with people I’ve never been in the same room with. I don’t have any intention of stopping. I’m ready for primetime, baby.”

Celebrating a new album out this week, the Grammy-winning soprano shares her backstory and insight into her embrace of diverse musical styles.

The award-winning violinist, singer, and composer talks with SFCV about her latest album and multifaceted career.

International Jazz Superstar Down Low in the South Bay