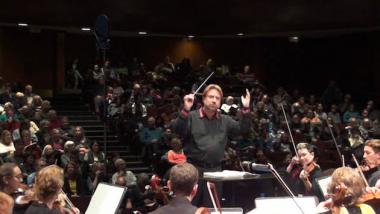 We caught up with Eric Kujawsky the other day. Frankly, he was frustrated, and has been for years. He doesn’t hide it.

Well, but you could argue, he has good reason.

Kujawsky is the director, founder, and inspiration behind the Redwood Symphony, which he has recently nicknamed “the Bernie Sanders of Symphonies” because of their steadfast commitment to a progressive approach that embraces ambitious and contemporary music. If you wonder whether that includes a chip on the shoulder; yes, it does.

The Symphony will perform Mahler’s Eighth Symphony in E-Flat Major, the “Symphony of a Thousand,” on July 30, at 8 p.m. in the San Mateo Performing Arts Center. Kujawsky’s preconcert lecture begins at 7 p.m.

Mahler’s premiere, in September 1910, included an army of 858 choristers and soloists. According to the program from the premiere, there were 350 child choristers alone and 171 musicians in the orchestra. Kujawsky has mustered a volunteer force totaling 300, including the orchestra and perhaps 200 singers (who will be miked up), enough for a double chorus and a contingent of some 25 children. The exact number of children was not yet clear as late as early July, because voices were still being recruited.

In 1982, Kujawsky founded the Stanford Summer Orchestra, with two-dozen musicians.  Three years later that became the Redwood Symphony. He was just coming off his doctoral degree in conducting at Stanford with the hope of building a critical mass of local musicians drawn to the promise of an unusually ambitious repertoire, and drawn to the sneaker-and-slacks ambiance of a start-up. Members have always included long ago music majors, ex-ensemblists, professionals, retired or not, and a panoply of Silicon Valley types.

Altogether, people who could never quite choose between the path more taken or less.

The Symphony has produced six studio-recorded CDs. They’ve performed all of Mahler’s 11 symphonies — it took 17 years to do it — along with most of the major works of Stravinsky, Bartok, and Copland, as well as pieces by John Adams and Michael Daugherty.

“I like modern composers that use popular idioms in their music,” said Kujawsky, “something that audiences can get a hook into.”

Among its most ambitious undertakings the symphony performed Olivier Messiaen’s Turangalîla-Symphonie, which includes 10 movements and parts for some exotic percussion instruments.

In sum, Kujawsky’s band has established a wide reputation for uncommonly good quality, yet the San Francisco Chronicle, for one, refuses to review their concerts.  Hence, much of Kujawsky’s frustration.

Asked the difference between the sound of his amateur orchestra and that of, let’s say, the San Francisco Symphony, Kujawsky replied, “If you are a sensitive listener you’ll notice that the intonation will not be quite so pristine. Sometimes, the ensemble will suffer a bit. Sometimes, I have to rewrite a passage here or there.”

“I liken it to the difference between going to a professional restaurant where every dish is perfectly made every time, and going to a cafe where they serve lovingly made, home-cooked meals, which are delicious but not always perfectly composed.”

It’s all part of Kujawsky’s conviction that ‘amateur’ has acquired a somewhat pejorative connotation these days, particularly in the press. And yet he’s found over the years that people come to the concerts not to count mistakes but to offer support and appreciation.

As for his approach to directing an amateur group, Kujawsky keeps his conducting “very clear and simple, because every time I have to stop and explain what I’m doing in a rehearsal it wastes time and of course one of the main functions of a conductor is to save time. It’s just too hard to make group decisions for everything.”

“So I’m trying to plough through all this music as quickly as I can and so I keep my gestures very clear. I also do a lot of cuing because amateurs can often get lost.”

Kujawsky recommends to his musicians that with every piece of music, they listen to a noteworthy recording of it, which he finds is as helpful as actually practicing. For Mahler’s Eighth he recommended a recording by Leonard Bernstein and the New York Philharmonic.

“As Mahler conductors go Leonard Bernstein is the model.” Not withstanding the likes of Solti, Mehta, and, of course, Michael Tilson Thomas.

Inquire Within; No Audition Required

And all the while, the maestro must tred gently. “I always keep in mind, when I’m giving criticism, that these are volunteers, and if they don’t like the experience they won’t come back. So when it comes to seating or assigning one person to play principal rather than someone else, it’s always a juggling act.”

Kujawsky added that his strategy is often to reduce any sense of hierarchy. “So when it comes to seating, strings are always rotating; you’re never always in front or in the back. And with the wind and brass they’re all considered principals so at some point during the season everyone gets a chance to be a principal.” By doing that Kujawsky feels he attracts better players to fill in second and third spots.

In 31 years, the orchestra has included just one ringer, a second harpist for Berlioz’s Fantastic Symphony. And that was because of an emergency. Kujawsky has been very careful that musicians are not wondering if they’re playing next to someone who’s getting paid.

“For me, it’s a point of great pride that this is a truly amateur orchestra. Sometimes, the marketing people say to me, ‘don’t use that word, amateur. That’s a bad word.’ But I think it’s a great word. It comes from the word, ‘to love’ and it reflects a truth, these are people doing this because they truly love it. Perhaps more than many professionals do.”

“It’s what I tell the parents of my students”  — Kujawsky teaches violin and clarinet — “the goal is not to make your child a professional musician, it’s give him or her something that will last the rest of their life. And that’s kind of how I look at this symphony. Incidentally, I have people in this orchestra still playing in their 90s.”

Margaret Elliot is 94. Her favorite Mahler piece is his Symphony No 1. Not the Eighth, which she’ll tell you is just so long and difficult, but no matter, she’ll do it. At 94 she’ll do it, she’ll pick up her viola and practice for 45 minutes to an hour — not every day — but most days, just now playing the same brief set of notes over and over and over. A little monotonous, she said, with just a twist of resentment.

Margaret will also listen closely to the Bernstein recording, and she’ll do it all because she’s been playing music all her life, since she was 14, growing up in Nebraska, and she do it because she so enjoys the Eighth Symphony’s choral parts. And finally, you watch, she’ll be at all eight rehearsals — and be there because Eric Kujawsky asked her and he’s been awfully nice to her for all these years, since the beginning.

But it’s not just that.

“I admire Eric for his ability to found an orchestra and keep the interest alive among the players and by having varied programs each year.” And beyond that his hands-on approach. It’s all to say that for many of the musicians Eric keeps the dream going, keeps all those memories and qualities that you associate with playing classical music at a high level, going.

For his part Eric — you sense always a little bit the outsider — keeps everything going because when he decides he’s going to do something, he does it, he gets it done. And the more audacious the project, the better and the more driven he becomes. That’s his nature. That and his love for the repertoire. And his compulsion to compete for musicians. To draw the most talented one he can into his circle. To prove that there is another model for the modern symphony.

In the beginning, he was also kindled by an effort to attract attention to himself, the up and coming young conductor. “Doing big projects seemed to make a difference.” But then all these years later he’s still having to attract attention, which is often the penalty for trying new things….

Kujawsky’s favorite moments in the “Symphony of a Thousand” include the ending of part 1 when orchestra and chorus come together. And then also the moment at the end of part 2. A moment with a sonic quality no recording he’s ever heard has quite caught, when the ‘spirit’ soprano comes in as though from a distance. It always sends shivers down his spine, particularly when Shawnette Sulker sings it, as she will.

The 81-minute performance includes supertitles and an intermission. Tickets are $30 at the door; $25 in advance. Senior and students pay less. This is a one-time performance.

On September 25, the Symphony will present The Rise and Fall of the City of Mahagonny, the opera by Kurt Weill and Berthold Brecht — “The opera that Hitler hated.” And perfectly in tune with the political season.