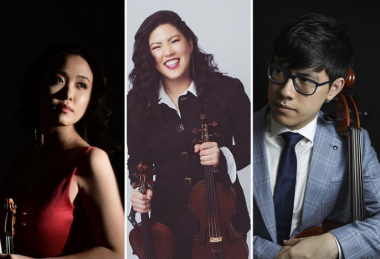 In ordinary times, few things are as perfunctory as awards — they happen every year and there’s never a lack of talented high achievers to hand them out to.

But since we’re searching for good news these days, the Avery Fisher Career Grants, awarded three weeks ago, bring a welcome feeling of normalcy and hope for the future. Won’t it be great when we get back to awards being perfunctory?

The Avery Fisher committee broke new ground for themselves by adding in their first early music specialist award winner. She is Rachel Ellen Wong, a violinist based in New York who has played with a long list of early music heavyweights, including American Bach Soloists. Wong’s extraordinary musician imagination, which you can hear on her performance of Giuseppe Tartini’s “Devil’s Trill” sonata, leads to highly dramatic interpretations. She’s a founder of New Amsterdam Consort, a group of Juilliard grads doing repertory from the Renaissance through the Baroque. She also co-founded Dioscuri, a group that plays music of all periods on period instruments and is slated to be hosted by Tanya Tomkins and Eric Zivian’s Valley of the Moon Festival this July, which we can all hope will go on as scheduled

Wong has been winning awards practically since the day she picked up her instrument, and she now has a masters degree in historical performance from Juilliard, to go with degrees from University of Texas (master of music) and Indiana University.

Cellist Zlatomir Fung won the Tchaikovsky Competition, cello division last year and has been heard on NPR’s From the Top six times. And I lead with that because Fung is all of 20 years old, ancient in the world of prodigies but not that far removed from the youthful talent competitions, of which he won a handful. On a local note, one of those was the 2014 Irving Klein International Competition. Two years later, he was a U.S. Presidential Scholar for the Arts. You just hope he kept up his grades, because you know, international recitals aside, you have to have something to fall back on.

American violinist Stella Chen, meanwhile, won the Queen Mathilde Prize in the 2019 Queen Elisabeth International Violin Competition, which followed her win in the Tibor Varga International Violin Competition, which followed being youngest ever prize winner of the Menuhin Competition. She also won the first ever Robert Levin Award from Harvard University, where she graduated with honors with a degree in — psychology, of course. Her music degree, which she pursued at the same time, comes from the New England Conservatory.

She’s now a doctoral student at Juilliard, where she studies with Li Lin, Donald Weilerstein, and Catherine Cho. She’s also performed with a number of professional ensembles you may have heard of, like the London Chamber Orchestra, the Lausanne Chamber Orchestra, and the Silk Road Ensemble, and the [email protected] Festival, as well as performing recitals at the Kennedy Center, Metropolitan Museum of Art, and on the Dame Myra Hess Memorial Concert Series in Chicago. 2019–2020 held many debuts for her, some of which have been postponed. It’s something to look forward to.

The prizewinning violinist talks about championing new works by living composers and her upcoming concerts with the LA Phil.

Not every award is worth crowing about, but winning an Avery Fisher Career Grant puts you in pretty rare company as this year’s winners attest.