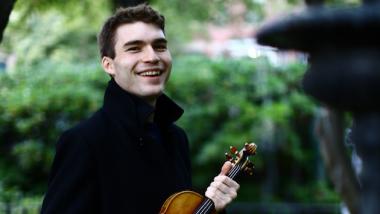 Alexi Kenney recently won an Avery Fisher Career Grant, one of the most prestigious awards given to young musicians working toward a solo career. Kenney, a 22-year-old violinist from Palo Alto, was given the award in late March, but was first notified two months earlier and sworn to keep mum.

“I consider this most amazing thing I could have dreamed of,” he told us by phone the other day from the New England Conservatory of Music where he’s in the highly selective Artist Diploma program. “You don’t know you’re being considered; it’s a prize out of the blue.”

The $25,000 Avery Fisher grant program was established in 1976 and is given to not more than five musicians a year (and, since 2004, ensembles). In addition to Kenney, this year’ group included violinist Tessa Lark, violinist Sean Lee, cellist Jay Campbell and pianist George Li.  The program’s Recommendation Board (comprised of musicians, managers, and presenters) nominates artists to an executive committee, which then chooses the musicians. And, as the biographies of this year’s winners show, the AFCG is more of a coronation than a discovery of hidden talent. Tessa Lark, for example, made her major breakthrough in the wake of winning the 2012 Naumburg Competition, and was showcased by San Francisco Performances in January 2013, when SFCV ran this profile on her. Sean Lee has a position on the Juilliard faculty and recorded his debut album with EMI in 2013. And so on.

“It has this exclusive air about it,” noted Kenney. “Looking at the list of people who have won it in the past it’s a who’s who in classical music. And it’s a large cash award of course, but it’s the publicity that’s actually going to be the most helpful for me.”

He added: “That’s most important thing — to keep your name out there and circulating.”

Kenney, represented by the Concert Artist Guild, says he has not done as many competitions over the years as his peers. “I’m in a minority. I feel like I’ve gotten far without doing many. But I’ve been very careful in picking the ones to enter. Basically, I’m the kind of person who’s always looking for the next thing to do; I’m always on the lookout for a way to get more of what I really want to do, which is playing in concerts and traveling.”

“That was one of the greatest things I’ve done because it opened all these doors to perform and get out there. And that’s really what I’ve learned is that everything leads to something else.”

The irony is that Kenney, who practices at least two hours a day, “with many small breaks,” doesn’t believe in the competition route, and his advice to young people starting the process is, “first and foremost never enter a competition to win it.” And certainly never count on winning; rather, see it as a way to follow your love of the music.

Which is perhaps easy to say when you’ve won so many.

“I don’t think competitions are necessarily in line with what I believe in. I’ve always felt that it seems a little insincere to do a lot of competitions and to have all these prizes. Yes, they’re great to have but only in so far as they make you perform more often, help you get better known, and acquire more experience.”

Moreover, he added, “I see a trend among many musicians toward playing solely for the competition, in the sense of either trying to show off or play perfectly. But if you don’t have a real love of the music —- and the need to bring it out to your audience —- then I think you’ve missed what the driving force should be.”

What undermines the competitions said Kenney is the obsession with perfection and the knowledge that just one mistake can put you out of the running.

“It should be more about artistry and individuality. After all, music is a delicate balance between communicating the composer’s wishes as accurate as possible and also bringing out your own emotions and it’s hard to make those equal. If you bring out your own emotions and really let yourself be vulnerable, if you cross that barrier, you’re probably going to make mistakes because you’re moving yourself into that emotional world. Which is a good thing and something we as musicians, and artists, should be doing more of. I’m always trying to be a little bit more vulnerable on stage. Of course, I don’t want to make mistakes to mar the music, but if I make one at the expense of my emotion then I’m okay with that. ”

There may not be an alternative to competition given the number of very qualified musicians, but as Kenney put it, “There are a lot of people who deserve careers and don’t get them.”

Kenney’s fantasy —- and the ultimate prize he seeks —- is to play with some great orchestra, above all the San Francisco Symphony, which he watched while playing in the youth orchestra. “I idolized MTT. That’s the kind of thing I dream of.” He would also like to be part of a great quartet.

Among other appearances this year, Kenney will be play a solo recital locally, at the 2016 Festival Napa Valley on July 19.

Correction:  This article incorrectly added the names of former Avery Fisher Prize winners to the list of former Career Grant winners. Those names have been removed.