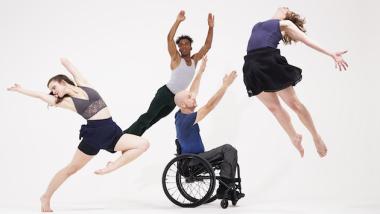 In the last scene of Joe Goode’s stunning 2015 dance-theater production, to go again, an Army wife recounts the moment when she heard the news: “In 2006, he left in September for Afghanistan and he was actually there for 10 days when I got a funny message that said, ‘he’s not dead.’”

Not dead but horrifically injured. And so a war story, in the vein of Dalton Trump’s Johnny Got His Gun, and using a wheelchair as a “choreographic tool” — but in the hands of someone who is actually disabled.

It’s all the work of the AXIS Dance Company, an Oakland-based troupe, whose dancers are with and without disabilities. The company, whose focus is on “physically integrated dance,” was founded in 1987 by Judith Smith, who has been the artistic director until just recently. Smith was injured in a car accident at age 17 and has been confined to a wheelchair ever since.

The company, which performs for more than 20,000 youth and adults each year, works with choreographers like Bill T. Jones, Kate Weare, and David Dorfman to create one-of-a-kind pieces.

The company has just received Doris Duke Charitable Foundation Leadership in Dance Award.  The grant is for $200,000, allotted over four years.

“This is such an honor,” notes Smith, adding that it recognizes and “confirms AXIS’ almost 30 years of creating, performing, teaching, and advocating for high artistic standards in dance and equity for people with disabilities in the performing arts.”

The Doris Duke Charitable Foundation Leadership Grant program provides finely tuned funds that enable organizations to adapt to changing conditions in the performing arts, including the impacts of demographic change, audience behavior, and technology. To qualify for the grant, AXIS completed a three-year forecasting and financial modeling exercise.