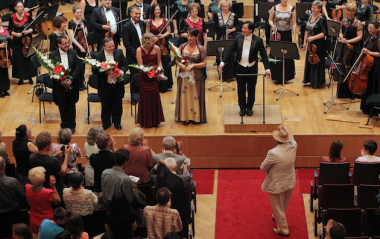 Berkeley Chorus to Sing Brahms’s Requiem at Home and Abroad

Joining the summer’s musician exodus to Europe, the Berkeley Community Chorus & Orchestra will symbolically wave at the SFS Youth Orchestra and New Century Chamber Orchestra on the way to its tour of the continent; it’s also paving the way for the S.F. Girls Chorus, which will perform in England and France, July 18–29. (Originally scheduled to appear in Notre–Dame, SFGC is still working on its itinerary.) 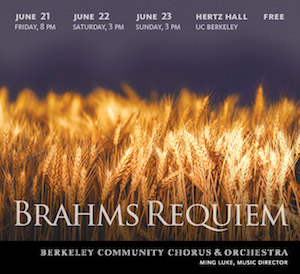 Before departure, the Youth Orchestra is giving two bon voyage concerts (May 19 and June 16), BCCO offers three, as they always do: June 21–23 in Hertz Hall. Berkeley Chorus’ Janice Murota explains:

Ming Luke will lead the 240-member symphonic chorus, the orchestra, and the audience through the gorgeous sonorities, masterful modulations, and deep emotions of the Brahms Requiem. Ellen Leslie, soprano, and Andrew Pardini, baritone, will be the featured soloists.

As throughout all of BCCO’s 53-year history, the concert will be free, in keeping with BCCO’s foundational belief that “everyone should be able to enjoy great music.” (Of course, donations from the community to support BCCO are always welcome at the concerts or at any time.)

Brahms began writing the Requiem in 1865, following the death of his mother. The work was completed in its final seven-movement version in 1869 and performed in Leipzig with the Gewandhaus Orchestra and Chorus.

In contrast to the traditional Latin requiem — based on liturgies for the souls of the dead — Brahms chose words from the Psalms and other books of the Bible to console the living for the loss of loved ones and to support their own journeys through a limited lifespan.

According to Music Director Ming Luke, “Brahms gave his German Requiem the title because the texts he chose are all quotes in German from the vernacular Lutheran Bible, and not from the traditional Latin requiem mass. With the beautiful texts that Brahms selected and the piece’s well-crafted musical structure, the Requiem delivers a solid and moving message of comfort, hope, and exaltation. “

BCCO begins the tour two days after the last Hertz hall concert with a flight to Helsinki, where sightseeing is scheduled, but no concert. “We sing the Brahms Requiem in Nokia Hall in Tallinn, Estonia,” Murota says. “We perform again in the Riga Cathedral in Latvia. The cathedral is largest place of worship in the Baltics, also has one of the biggest organs in Europe (6,768 pipes). It was such a marvel in its day that Franz Liszt composed a piece of music in its honor.”

The final performance of the Brahms will be in Sweden at the Stockholm Konserthuset (TBC), whose main hall is used for the presentation of the Nobel prizes.

This is BCCO’s third overseas tour since Luke took over as music director in 2011. The first tour in summer of 2013 was to Eastern Europe, the highlight: singing the Dvořák Requiem at the Rudolfinum, in Dvořák Hall in Prague. Ming considers the performance, well received by the audience, a highlight of his career.

The second tour was to central Europe in 2016 where BCCO sang the Verdi Requiem in Belgium’s Bruges Concertgebouw and St. Martin’s Cathedral in Ypres. The tour concluded in Stuttgart, Germany.

The lauded BCCO volunteer chorus and orchestra usher in the new season with big works from Prokofiev and Rachmaninoff.

S.F. Symphony’s Youth Orchestra Is Ready for the World Stage

SFSYO’s Young Mahlerites are taking the music to the Old World — again.

Daniel Hope and orchestra will visit some of Europe’s major musical festivals.