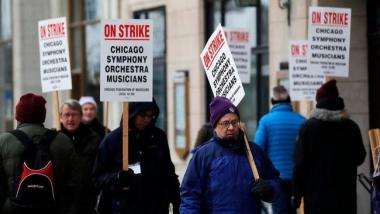 The 128-year-old Chicago Symphony, one of the country’s oldest and most acclaimed orchestras, has ceased operations. After nearly a year of negotiations for a new labor agreement, and at apparent deadlock over salaries and pension benefits, musicians of the Chicago Symphony went on strike on Sunday.

After completing an afternoon concert and negotiating all evening, the musicians walked out and announced they would not return until a contract agreement is reached.

“We have been clear from the beginning that we will not accept a contract that diminishes the well-being of members or the imperils the future of the orchestra,” said Steve Lester, bassist and chair of the musicians of the CSO negotiating committee.

As of Monday, picket lines were set up around Orchestra Hall, the musicians requesting that no performer or patron cross the line.

Just before the strike began, Chicago Symphony Orchestra Association President Jeff Alexander sent an email to the musicians to say that the institution’s pension obligations have risen to $3.8 million this year, will reach $5 million to $6 million annually in coming years, and will add up to $36 million over the next eight years.

Alexander later told the Chicago Tribune that “it’s an amount of cash that we just don’t have to put into the fund,” citing two major reasons for the steep increase in pension contribution requirements: interest rates and mortality tables.

Lester said the orchestra could “easily afford the requirements that we have outlined. ... We have a $300 million endowment, we have a $60 million investment fund, completely at the disposal of the management.”

Music Director Riccardo Muti, who has just led the orchestra on an Asian tour and in a Florida residency, took the unusual step of supporting the musicians. With very few exceptions — such as Osmo Vänskä’s resignation as music director in sympathy with the musicians when the Minnesota Orchestra’s strike seemed unsolvable — music directors rarely take sides in labor disputes.

Muti, who has been active in Italy demanding continued government support for opera houses and symphony orchestras, told the CSO management that “I am with the musicians. I understand their needs and how they should be treated, and the fact that they are among the best musicians in the world. A crisis would damage the image of the institution. The musicians themselves, the public and the entire musical world would be surprised to see the orchestra in trouble.”

Muti urged Alexander to “remember that theirs is not a job but a mission” and reminded him of the performers’ need for “tranquillity and serenity.”

Our musicians enjoy, without question, one of the best contracts in the world of symphonic music, including wages, seniority pay, paid time off, sabbatical leave, and health care coverage.

We are proud of this fact and work tirelessly every day to earn and raise the funds to support it. In these negotiations we remain apart on coming to an agreement on wages and the pension benefit. We have offered wage increases, and what we consider to be a generous transition from our defined benefit pension plan to a defined contribution plan.”

Alexander said on Friday that the annual base offer has been upped to $167,000, but Lester, countered with concern about “a declining path,” referring to the CSO’s position against the other major orchestras: “We used to be ahead of them 10 years ago, now we’re barely even with one and way behind on the other two [SF and LA]. The association wants to keep us on this declining path. We are not a second-rate orchestra.”

CSOA’s most recent financial report, released in October, says ticket sales rose by $1.1 million to $23.3 million in the 2017-18 season; operating revenues were $72.7 million against expenses of $73.7 million, leaving a deficit of $900,000, the institution’s eighth consecutive deficit — even if the amount has been reduced.

The four-year agreement continues to place S.F. Symphony at the top of the orchestral pay scale.

The rapport between conductor and orchestra leads to powerful but unfussy performances.