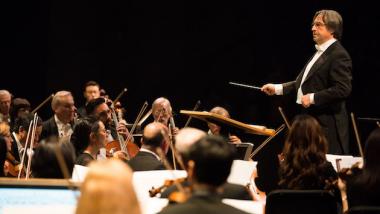 The Chicago Symphony Orchestra’s performance at Cal Performances, in Berkeley Friday night, was a timely respite from tumultuous current events in the Bay Area—and a reminder of the healing abilities of music. Their arrival was welcome, as Zellerbach Hall was filled to the brim for the sold-out performance.

The program began with Rossini’s Overture to William Tell, led by the elegant solo of principal cellist John Sharp, whose ascending line was pure and enlivened with sparkling vibrato. Sharp was subsequently joined by five of his cellist colleagues, blanketing his line with rich support. The English horn, amicably complemented by flute, set the pastoral scene before the most famous theme set in.

The element of surprise played a significant role—Music Director Riccardo Muti often let the orchestra play themselves, adding to comradery and musicality onstage. He stood almost still, yet engaged, at times to emphasize the soft sections, later to be interrupted by the bombastic themes, in which his arms would leap into the air. The acoustics of the hall were friendlier in reverberation and volume to the brass than the strings, though their successful execution came across nevertheless.

After the overture, the orchestra played young composer Elizabeth Ogonek’s All These Lighted Things (three little dances for orchestra). Ogonek, currently a Mead Composer-in-Residence at the CSO, wrote the piece for the ensemble. Ogonek states that the title “comes from a line in a poem about dawn, written by Thomas Merton. At the heart of the piece is celebration and reverence for the things that bring joy. It comes on the heels of several very dark works and, thus, is kind of a first morning light.”

The music is driven by its dancing rhythms, which become swinging and jazzy in the last dance, and various effects in the percussion section, including a rain stick and clapper. The piece began in a lighthearted, exploratory manner, later to be interrupted by ominous lines. Themes in the piece were fleeting, as one section of the orchestra introduced a tune, other lines were layered in, and then the music switched to another rhythm and mood.

The strings, winds, and brass, played hauntingly beautiful melodies with a Stravinsky-esque lyricism, and the strings added to the percussion section as well, using a “snapped” pizzicato. The juxtaposed themes and creeping transitions painted a real depiction of the human experience and our perception of the world around us, complete with moments of joy and sorrow, and maybe something in between.

I had the opportunity to speak with Ogonek during the concert’s intermission, and she commented on how enlightening it was to “see the piece come to life in different halls, which makes it sound different every time.” She added, “I’ve realized, once I put the piece out there it’s not mine anymore.” Ogonek explained that her largest inspiration for the piece is our conception of light, which is not naturally “big and bright” forever, but is accentuated by, and contrasted with, darkness.

The CSO finished with Anton Bruckner’s dramatic and resounding Symphony No. 4 (“Romantic”). At 69 minutes, it’s a feat to play, especially in the unwaveringly energetic manner in which CSO presented it. This was a triumphant display for the CSO’s musicians. The horn calls were impressively powerful and steadfast, and the brass boomed from the back of the orchestra consistently through the work. The strings’ yearning, operatic lines, and notably the viola section’s solos, were touching and unified in expressivity and emotion. Muti’s sentiment and fluidity of movement, a joy to watch, carried the orchestra seamlessly through the piece and captured the symphony’s heart-wrenching journey.

Faced with the retirement of one famous conductor, the Chicago Symphony went courting and landed its man.

In Verdi’s birth year, the Chicago Symphony celebrated the right way, led by Riccardo Muti, one of the greatest of the composer’s champions.