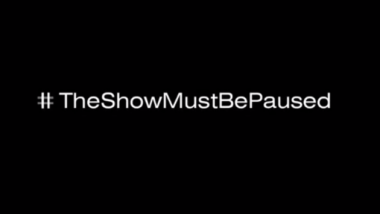 In the midst of the public outcry over the death of George Floyd, killed by a Minneapolis police officer in front of horrified witnesses and three other officers, two music-industry leaders called for a day of silence on Tuesday, June 2. Brianna Agyemang and Jamila Thomas floated the call for #TheShowMustBePaused in response to other Blackout Tuesday vigils happening today.

In their Instagram post, which spread rapidly, the marketing executives said, “The music industry … has profited predominantly from Black art. Our mission is to hold the industry at large, including major corporations and their partners who benefit from the efforts, struggles, and successes of Black people accountable. To that end it is the obligation of these entities to protect and empower the Black communities who have made them wealthy in ways that are disproportionately measurable and transparent.”

Although the day of action seemed to leave classical organizations to the side, many of them across the nation were expressing sorrow and commiseration. Perhaps most striking was the statement from the League of American Orchestras, penned by its president, Jesse Rosen. Sent out Monday, June 1, it says, in part:

In the face of ceaseless intolerance, hatred, and violence against African Americans in our country, historically and currently, we are impelled to reaffirm that we value all Black lives. Our colleagues of color — and many communities served by the orchestras we represent — are living with deep pain and fear, subjected to the threat of police violence, to the risks inherent in serving as essential workers in a time of crisis, and to ongoing oppression in a society scarred by racism. There is an urgent need for White people and predominantly White organizations to do the work of uprooting this racism. We recognize that for decades, in our role as a national association and voice for orchestras, we have tolerated and perpetuated systemic discrimination against Black people, discrimination mirrored in the practices of orchestras and throughout our country. And while we have called the field’s attention to the need for change and provided resources to support that work, we struggle to move as quickly as we should to align practices with our stated beliefs.”

All over the classical community, including at San Francisco Classical Voice, there is much more work to be done to confront the historical legacy that leads to and perpetuates these tragedies, and the League’s statement was a heartening promise to lead by example.

The San Francisco Symphony hit the pause button on its online activities on Tuesday, saying, “Even as we mourn apart from one another, we are united in standing against injustice and racism.” The orchestra’s CEO, Mark C. Hanson, sent a private memo to the SF Symphony community, which he agreed to share with SFCV, in which he detailed the ongoing work toward inclusion that the orchestra had undertaken:

I am proud of the San Francisco Symphony’s Diversity, Equity and Inclusion Workgroup that has been working together for the past 18 months. This group, made up of dedicated musicians, Board members, and staff, has debated and discussed many issues including our institution’s role in normalizing exclusionary practices that are extensions of broad systemic imbalances of wealth and power. I have learned so much from each and every fellow member of the DEI Workgroup and am committed to supporting the workgroup’s ambitious goals for our institution:

•  The San Francisco Symphony strives to be an organization that listens to, includes, cares for, and serves everyone through thoughtful inclusion of every stakeholder.

•  We acknowledge that we must first model the change we want to create externally with our internal behavior.

•  We understand that our privileged position as a leader in our field comes with an opportunity to inspire others by modeling brave changes. We embrace the opportunity to serve as an industry leader in our efforts to address the ways in which orchestras have been complicit in broader societal injustices.

•  We recognize that doing effective DEI work will challenge our institutional assumptions and understanding of the world around us, but that engaging with and working through these challenges is the only way to reach the communities that have been historically excluded, and to leverage our music as a vehicle to inspire and heal.”

The San Francisco Opera issued a joint statement from General Director Matthew Shilvock and Charles Chip  Mc Neal, the head of the newly created Department of Diversity, Equity and Community, and also sent an internal memo, that reads, in part:

Events across the nation this last week have laid bare the systemic acts of hatred and violence perpetrated against Black people in our communities, leaving us in the Opera family feeling outrage, anger, hurt and sorrow. We want to express our grief and sympathy for the family of George Floyd, and all those families directly and indirectly impacted by these all-too-frequent tragic events, and we acknowledge the fear that so many people in our communities, and in our Company, are feeling.

As a company we lift our voices in solidarity with those working to create a more just and equitable society, and we too must do our part. We acknowledge that, as an art form, we have been historically aligned with privilege. We have much to learn about how to combat institutionalized racial injustice and we are on a conscientious learning path to better understand how we can move past systems that undermine opportunities for people of color in our art form. We must find better ways to include and empower diverse perspectives on our stage and throughout the Company. We are learning from our past and we are committed to doing better.

The Los Angeles Philharmonic, on Instagram, posted "From Marian Anderson on the steps of the Lincoln Memorial, to Nina Simone's blistering anthems against oppression, musicians have always shone a light on injustice in America. The LA Phil stands against racism and inequality. We stand for inclusion. We stand for compassion. We stand with our Black colleagues, musicians, and the entire Black community."

The Los Angeles Opera also paused its activities today and tweeted, in part:

“We acknowledge the longstanding pain and frustration felt by so many, especially those in our Black communities. We stand by them in sorrow and solidarity, opposed to prejudice, violence, devastation, and inequality.

We commit anew to self-examination, and to devoting the time, attention, and resources necessary to do our part to heal wounds that are hundreds of years old.”

In addition to its statement of solidarity with the protest, Seattle Opera provided links to two of its recent “community conversations”:

•  Breaking Glass with panelist Naomi André, Seattle Opera’s scholar in residence. The forum discussed how art can stimulate discussion surrounding diversity, equity, and inclusion in opera; how art is produced in an increasingly diversified America; who has the right to tell whose story; and what roles social justice plays within the artistic mission of an opera company.

•  Black Representation in the Arts. This community conversation from February explored questions like: How does the storytelling change when Black creators and artistic leaders are the ones making decisions behind the scenes? How can companies help to undo harm, create a more diverse pipeline of talent, implement more race-affirming performance practices, and ultimately, enable the decolonization of these historically white-dominated art forms?

Life is a collection of stories told through the arts and music …. As a mother to brown boys and partner to a Black man in America, I reflect on my own husband, who has had to stare down the barrel of a police gun as a 15 year-old boy and then again in our own home more recently, each time without cause, a sense of compassion, or reason. While these stories are countless, many are still untold, omitted, or forgotten.”

For the arts, it’s a time to remember, include, and tell as many different stories as possible.

NB: The original version of this article misspelled Charles Chip Mc Neal's name. We apologize for the error.

As head of a new SFO department tackling diversity and inclusion issues, Mc Neal helps administrators recognize and confront their own biases.

L.A. Orchestra Fellows at the Center of Diversity Efforts