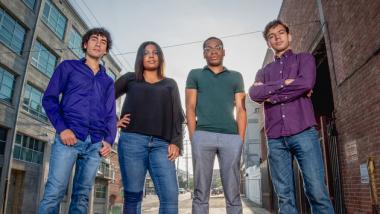 L.A. Orchestra Fellows at the Center of Diversity Efforts

In 2016, the League of American Orchestras reported that less than five percent of the workforce of American orchestras was African American, Hispanic, or Native American. Two years later, a new strings fellowship program, formed in partnership with three of Southern California’s leading classical music institutions, addresses that disparity.

Together, the Inner City Youth Orchestra of Los Angeles (ICYOLA), Los Angeles Chamber Orchestra, and USC Thornton School of Music guide the program’s course of study. With ICYOLA in the mix, the Fellowship can boast being the only “pipeline of support” in the realm of American classical music led by “an institution of color.” The youth orchestra, the largest African American-majority ensemble of its kind, provides the fellows with teaching and performance opportunities, as well as community exposure.

LACO musicians, including concertmaster Margaret Batjer and guest artists Anthony McGill and Peter Oundjian, play a central mentorship role. Of her involvement in the program, Batjer says it is “an extraordinary opportunity” for teacher and student alike. The fellows perform in two LACO concerts this upcoming season (Beethoven’s Symphony No. 5 and Mozart’s Requiem) and participate in audition workshops led by the orchestra.

At USC Thornton, fellows will be on track to receive a Graduate Certificate at the end of two years. String faculty serve as mentors and collaborators, and the USC Thornton Symphony offers additional performance experience. Adedamola, Pisco, Parrimore, and Carrasco — all graduates of top music schools in the country — form a quartet-in-residence of sorts that will play throughout the Los Angeles area, with a renewed focus on reaching underserved communities.

A $700,000 grant from the Andrew W. Mellon Foundation, as well as support from Mark Ridley-Thomas and AFM Local 47, bolsters the new program, launched just last month. A second class of fellows is planned for 2020.

The California Jazz Conservatory on the March

Launching its accredited degree program and finishing an ambitious expansion plan, the CJC is entering a new era.