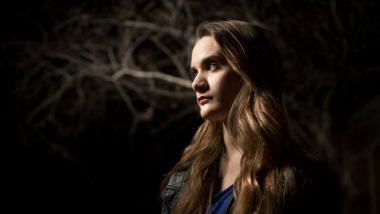 Vireo — an artist residency project of the California State University, Fullerton, Grand Central Arts Center in Santa Ana, California — took three years to develop and was composed by Bielawa, 46, on a libretto by Erik Ehn and directed by Charles Otte. The work was created for episodic release via broadcast and online media, in partnership with KCETLink, a non-profit digital and broadcast network. The first episode was taped last February.

“It was great to be recognized by colleagues in the news sphere,” Bielawa told us the other day.

The opera stars 17-year-old soprano Rowen Sabala as Vireo, a teenage visionary who encounters various characters through history as they try to interpret and manipulate her visions to fit their own worldviews. Much of the material is derived from Bielawa’s studies while a student at Yale University.

Of 12 planned episodes, four have been shot; the first two episodes are available online at KCET. The fifth episode will be shot on Jan. 8. The remainder will be shot in 2016, in cities around the country, including San Francisco. Musicians and music groups involved in the project include among others, the Kronos Quartet (episode 1); cellist Joshua Roman; and harpist Bridget Kibbey.

“It’s turned out to be quite a complex lattice work of different musical partners,” said Bielawa adding that this project has offered special insight into the nature of creativity.

I think I’ve learned — again — that the tension between pragmatism and fantasy is where the real magic happens. This is an environment where a lot of people each need certain kinds of circumstances to do their work. And so you would think that might leave people feeling that their creativity needs to be controlled; but actually this is exactly when the magical stuff happens.

This is yet another example of how I have personally found a way to be as social as I am and yet still be a composer. You know, for years I didn’t declare myself a composer because I always thought, ‘no I don’t want to be left in a room composing music because I love people too much.’ This project has really taken that to another level. I have to say, I am blissed out.

Bielawa, artistic director of the San Francisco Girls Chorus in San Francisco, is the daughter of composer and retired music professor Herbert Bielawa.