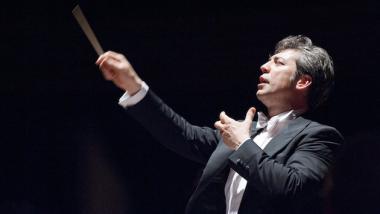 Whether or not it’s exactly true, it’s certainly ‘opera-true’ that on August 30, 1953, during an afternoon performance of Madame Butterfly, just as the soprano sang the word morire, in “un bel di vedremo”, Gaetano Merola, the conductor, suffered a fatal heart attack —just at that moment as the word ricocheted through the eucalyptus trees of Stern Grove.

Merola, a Neapolitan, was of course the ‘father of San Francisco Opera. He was the first to see a community hungry for a first-rate opera company, and a community with the money to pay for it. Skip ahead through the lineage of Adler, Pritchard, and Runnicles, to the David Gockley era, which began in 2006, promising a move “to reinvigorate the core Italian repertory.”

And who better to conduct the effort than Nicola Luisotti who arrived in 2009 and, as Gockley himself put it the other day, “I can think of no other person who embodies the love and passion of opera as much as Nicola Luisotti.”

Luisotti, 55, has now decided to withdraw at the end of his contract in July 2018. He will continue to serve as San Francisco Opera music director through the 2017–18 Season.

“I believe,” said Luisotti, “that close to a decade is about the right time to be leading a company. I want the Company’s General Director Designate Matthew Shilvock to be able to move freely into the future with his ideas, his artistic interests and to take San Francisco Opera into a new direction. As hard as it is for me to say this about a company I so dearly love, I sincerely believe this is the right path and the right time for me and San Francisco Opera.”

Since his Company debut in 2005 leading Verdi’s La Forza del Destino, the Tuscan-born conductor has led over 30 San Francisco Opera productions and concerts.

Shilvock, who becomes San Francisco Opera’s seventh general director on August 1, noted, “(Nicola) and I have talked about his decision in-depth many times over the past few months, and, while it was difficult to accept, I have come to understand the incredible selflessness with which he is making this change.” As for finding a new music director, Mr. Shilvock said would start looking immediately, “but will take the time necessary to find the right partner.”

Mr. Luisotti is scheduled to lead this summer’s Don Carlo followed by opening San Francisco Opera’s 94th season in September 2016 with a new Royal Opera, Covent Garden/Beijing National Centre for the Performing Arts co-production of Andrea Chénier and the annual Opera in the Park concert at Golden Gate Park. Later in the season, Luisotti will lead a new production of Aida and a revival of Rigoletto.