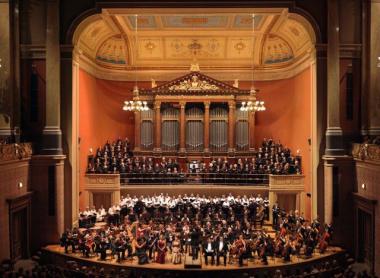 Although their professions are perhaps less dangerous than being a cop, choral and symphony conductors may still sing along with The Pirates of Penzance of the job’s burdens:

Our feelings we with difficulty smother –
When constabulary duty’s to be done –
Ah, take one consideration with another –
A policeman’s lot is not a happy one.

What audiences see of a conductor’s work up on the podium is a small — however demanding — part of the job. There is program selection and mastering whole scores (rather than just a singer’s or instrumentalist’s individual parts) for each selection; and for music directors, the job includes hiring and firing, administration, helping with fundraising and publicity, and much more.

For Ming Luke, these duties are multiplied by the number of organizations he works with: he is music director of both the Berkeley Community Chorus and Orchestra (BCCO) and the Merced Symphony; associate conductor of the Berkeley Symphony and of the San Francisco Symphony, and he conducts the San Francisco Ballet Orchestra throughout the season. He is also a finalist for the post of the San Bernardino Symphony’s music director.

The 40-year-old conductor was born in Belle Mead, New Jersey, attended Westminster Choir College and Carnegie Mellon University graduate school, and studied with Robert Page. He moved to the Bay Area in 2003, and lives in Mountain View, a location “convenient for my wife, who works in bio-tech.”

Luke became half-century-old BCCO’s third music director in 2011, embracing the organization’s welcome to all without auditions. He said he was attracted to “the idea that anybody can perform; that the artistic voice is just as valid if you’re a professional singer who has been singing for decades or if you’re someone who has never sung before in your life.

“We are all individuals with different backgrounds and experiences, yet every Monday night for three hours we come together and unify as a musical community to perform these great works. That’s the magic that happens.”

With the BCCO, Luke has been presenting such major works as the Dvořák Stabat Mater as well as the Czech composer’s rarely performed Spectre’s Bride, Mendelssohn’s St. Paul oratorio, and Prokofiev’s Alexander Nevsky cantata. The Britten War Requiem was one the highlights of the Luke-BCCO collaboration:

One of my most memorable performances as it was an immense undertaking by the organization for the 50th anniversary of the ensemble. Really powerful performances, especially so for the members of the chorus. But this Spectre’s Bride is also such a fantastic work — the chorus had such a great time performing this rarely heard gem. [It] really needs to be performed more often.

BCCO members are enthusiastic about their music director. Annette Bistrup says “Just because we are non-auditioned, Ming believes we produce a certain quality of sound --- that takes a kind of faith and Ming had, and has, that faith.”

Julie Fryckman says “Ming is so talented and inspiring that he could ask us to sing a grocery list and it would sound like a masterpiece.” Janice Murota, who has been doing important volunteer work in addition to singing with BCCO, says “It is sheer joy to sing with Ming. His love for the work inspires us to levels of musicianship we never thought we could reach.”

Luke’s extensive work with San Francisco Ballet has an unusual angle few conductors can claim: He was a dancer himself: “Yup, I danced ballet when I was younger, and it’s one of the reasons I became a conductor — the tactile sensation of music on the skin. The feeling of being on the podium where the music passes through you — you can feel every single vibration — is very similar to dancing, where your body connects directly to the music.”

His favorite SFB conducting experience? “Romeo and Juliet. Amazing music of Prokofiev of course, but it was the first time talking to [Artistic Director] Helgi [Tomasson] about the work and the progression of Juliet in the ballet through dance. It has always been on my bucket list to conduct, and it was particularly meaningful.

“Other favorite works include Justin Peck’s In the Countenance of Kings with music by Sufjan Stevens: absolutely innovative and amazing ballet. Liam Scarlett’s Hummingbird with the Tirol Piano Concerto of Glass: gorgeous, raw, and viscerally emotional. Glass Pieces, choreographed by Jerome Robbins, is a groundbreaking work!”

Of his conducting abroad, Luke has special memories of leading the Bolshoi Orchestra when San Francisco Ballet performed in Moscow. The music was mostly Russian — selections from Prokofiev’s Romeo and Juliet, Shostakovich’s Piano Concerto No. 2, and the Tchaikovsky Souvenir de Florence for chamber orchestra — and Luke says “working with this amazing orchestra on Russian repertoire was life transforming.”

A specific example: “The second movement of the Shostakovich concerto opens with the strings playing 'piano,' not 'pianissimo' or 'pianississimo.'

“Most orchestras would just play with a delicate soft tone. But the Bolshoi Orchestra played with a devastatingly intense soft tone that just drew you into a world of tragic isolation. When the piano finally joins in, it uplifts the music into a sweet, poignant melody. The incredible introduction from the strings made the contrast with the piano even more powerful. It’s something I will never forget.”

Violinist Benjamin Beilman wows with a powerful rendition of a Jennifer Higdon concerto.

"I'm a Performer": Where Music is for Everyone

The S.F. Girls Chorus joins the Berkeley Symphony for its annual “I’m a Performer” family concerts that are part of a three-step educational program to make music accessible to everyone.

“I’m a Performer,” the capstone to Berkeley Symphony’s community outreach efforts, is now more ambitious than ever: The Symphony wants everyone to perform together.