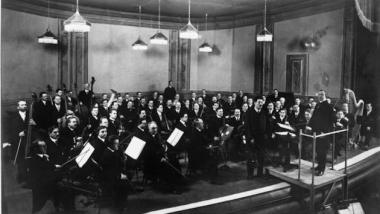 From the very beginning, 110 years ago, the San Francisco Symphony published program books for each concert being held in the Cort Theater. And now, these archival gems are available to the public.

These 12 bound volumes of programs from 1911-1923 were digitized by a state program, California Revealed, at no cost to the SFS. California Revealed helps cultural heritage institutions digitize, preserve, and make accessible materials documenting California history.

A requirement of the project is that digitized items are made freely available online. We selected the first 12 seasons of programs because, at the time we submitted, works created through 1923 had entered the public domain. As of Jan. 1, 2021, works from 1925 are in the public domain, so we hope to continue to nominate additional seasons of programs to be digitized as part of this project.”

Today, as the orchestra’s pandemic shutdown passes the one-year anniversary, it’s good to spend some nostalgic, heartening times with the historic survival of the city and its special relationship to music.

As part of the archive digitization process the programs were OCR’d (Optical Character Recognition) which means the text is searchable. An example suggested by Lipska: If you use the “search inside” tool with the 1918–1919 season volume, for “influenza,” you will find this notice at the end of the season, when the orchestra gave up in the face of the flu epidemic, both the page itself, and the excerpted relevant text:

The Board of Governors greatly regrets that it has been found inadvisable to extend the present season beyond March 30, owing to the heavy loss in season ticket revenue caused by the influenza epidemic and the very considerable expense brought about by the suspension of the season for the period of the epidemic.”

At the other end of the problem spectrum, there is documentation of constant frustration with the big hats fashionable back then and notices to ladies to be kind enough to remove their hats and not block the view of patrons behind them.

Using “Search Text Contents” in the search bar, write “hats” for various hat-removal reminder notices over the years; search “foreword” to find a beginning of season notice referencing Board of Health restrictions and Liberty Loans; search “request” or “request program” to find forms for patrons to submit requests for an all-request concert. Cumulative lists of works performed and soloists can be found near the end of each volume.

An unexpected search term is “reproducing,” which will locate player-piano concert history, as in “This will be the fourth time in the history of music that a Symphony Orchestra has appeared on a concert stage accompanying a reproducing piano.”

For the orchestra’s early years, a newspaper supplement for the centennial celebration 10 years ago can provide search terms that may produce intriguing historical information. For the most complete documentation, Larry Rothe’s Music for a City, Music for the World: 100 Years with the San Francisco Symphony is the best bet.

This is also a good time to remember Maestro No. 1, Henry Hadley, who conducted the SF Symphony in 1911, with soloist Fritz Kriesler, at the Cort Theater. And don’t overlook San Francisco music history even before 1911, all the way back to Barbary Coast days.

The small Wild West town of San Francisco in the 1850s had symphonic music and opera before paved roads or indoor plumbing. It also had a famous nine-block red-light district around Broadway, called the Barbary Coast, named after a pirate-ridden area off the coast of North Africa.

During the SF Symphony centennial “Barbary Coast” concerts, Laura Claycomb sang arias made popular back in those days by such great divas as Luisa Tetrazzini. Violinist Vadim Gluzman performed music from a Henryk Wieniawski concerto popular during the Gold Rush, and pianist Anton Nel played Louis Moreau Gottschalk’s Grand Tarantelle. The orchestra was joined by organist Cameron Carpenter in “Hail! California,” a sonic blockbuster composed by Camille Saint-Saëns for the Panama-Pacific Exposition. And so on, down Memory Lane.

When it comes to archives, SF Opera’s decade-old performance archive — created by the late Kori Lockhart — prompts recurring questions to SF Symphony: why no archive of programs and participants?

An archive of program books is one thing, and today’s news indicates the eventual availability of more recent seasons, but only decades in the future, if continued complex public-domain requirements remain in force. Surely, such information provided by the SF Opera archive — and those of the Met and many other organizations — has no copyright restrictions, so why isn’t it available?

According to SF Symphony Digital and Media Archivist Kristin Lipska: “A public-facing performance history database continues to be a goal for the SF Symphony Archives department, and something we are determined to keep pursuing. This is a project with many moving parts which requires considerable resources. We certainly recognize the value of having a publicly accessible performance database, and will continue working to make this a reality.”

And so we’ll continue to ask. “Who, other than MTT, conducted the Mahler Fifth that I heard long ago?” “Who were the soloists in that great St. John Passion?” “Were there performances of Orff’s music other than Carmina burana?” And so on.

Yes We Can: SF Symphony Prevailed Through More Than a Century of Vicissitudes

No matter what fate and history toss its way, the SF Symphony keeps making great music.

The show has gone on through great quakes, depressions, and wartime, but COVID-19 presents a confounding set of new challenges.

SFCV’s founder and long-time writer on the S.F. Symphony reviews its new official history and reports for the first time on some of what he witnessed that didn’t quite make it into the book.