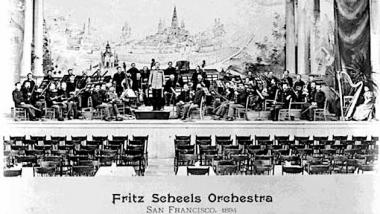 Yes We Can: SF Symphony Prevailed Through More Than a Century of Vicissitudes

Pandemic, shuttered concert halls, canceled performances, limited or no income for artists and organizations, 10,000 lightning hits, hundreds of fires, ash in the air, political havoc ... with all that’s going on, it’s good to know that the resilience of the city’s musical organizations has been proven many times, including in the days of the deadly flu pandemic, the Great Depression, and World War II.

The formation of the SF Symphony in 1911, with Henry Hadley as founder and first music director, came only five years after the Great Quake destroyed most of the city: Survival and recovery were miraculous.

“During this first season we shall give six symphony concerts and a number of concerts of a lighter nature, young folks’ concerts and so on,” Hadley wrote in 1911. “We hope to appeal to all classes, to develop a taste and to cultivate an appreciation for the best music among the masses.” The six concerts were given Friday afternoons, allowing the musicians to play in the evening at their profitable gigs in theater orchestras.

In 1918, as the city and the world were being devastated by the influenza pandemic, a visitor arrived from Russia. Sergei Prokofiev sailed to San Francisco, received in Angel Island as “Sergei Prokofiev | Male | 20–39 years old.” Yes, “20–39” — he was 27. His diary noted the tough times on Angel Island: “There is great fear of German spies and Bolsheviks coming from Russia.”

Little is known about Prokofiev’s musical activity while in the city; he soon took a train to New York, where his concerts met with a hostile press and public. It was only in Chicago that he met with success as a composer and pianist. The first time Prokofiev conducted the SFS was in 1930, when he led the orchestra in selections from his The Love for Three Oranges Suite; on the same program, Alfred Hertz conducted the San Francisco premiere of Prokofiev’s Piano Concerto No. 3.

In 1918, even during arduous travels around the world, Prokofiev wrote his Four Pieces for Piano, which SF Symphony violinist Chen Zhao and his wife, pianist Carri Abrahms performed in one of SF Symphony’s 2020 online programs.

In 1934, in the depths of the Great Depression, the Musical Association of San Francisco (administrative parent of the SF Symphony) went bankrupt. This caused the suspension of SFS activities during the 1934–1935 season.

During the season, however, the San Francisco Opera was able to continue with patron funding, and since orchestra musicians and venue (the War Memorial, which was completed just two years earlier) were shared between SF Opera and SF Symphony, the musicians had half a season (only about three months) of employment.

At that time, the Opera performed from October through the end of December, usually followed by the Symphony season in January. Another opportunity for employment for many Symphony musicians was a Brahms festival held at the University of California, Berkeley in June and July of 1935. Elizabeth Sprague Coolidge financed the four-week Brahms Festival of chamber music performances, which featured about a dozen of the SF Symphony’s leading musicians.

The major development in 1935, however, was the decision by San Francisco voters to amend the city charter, providing some municipal funding for the orchestra and stipulating that the SF Symphony would provide a series of municipal concerts in addition to the normal subscription concert series. (Imagine the same kind of action in 2020!)

During the same period, something happened that had a major impact on the SFS for many years to come: In the summer of 1935, Pierre Monteux, who had conducted the Los Angeles Philharmonic in 1934, signed a contract to rebuild the San Francisco Symphony as its music director.

Beginning in the autumn of ’35, Monteux auditioned musicians, preparing for a relaunch of the orchestra for the 1935–1936 season, with concerts on Friday afternoon and Saturday evening in the War Memorial.

The “municipal concerts” called for in the agreement with the city were billed as “Pop Concerts,” presumably to attract the audience, but the programs seem indistinguishable from the subscription concerts. For example, the first “Pop” concert included the Brahms Violin Concerto with Joseph Szigeti as soloist, followed by Weber’s Overture to Euryanthe and Wagner’s Prelude to Lohengrin.

For the “whole story” of SF Symphony’s century, I wrote a newspaper supplement on the centennial, but a far more complete and valuable documentation is Larry Rothe’s Music for a City, Music for the World: 100 Years with the San Francisco Symphony.

World War I and U.S. participation (1917–1918) and World War II and the years of direct U.S. involvement (1941–1945) both had their impact on the city and its musical organizations, especially the War in the Pacific. Even while windows were blacked out in fear of Japanese bombing in the winter of 1941, music performances continued in the city.

The flood of European refugees from World War II, the Holocaust, and  Soviet rule of Russia contributed significantly to San Francisco’s musical life (and to the economy of Silicon Valley, with fresh ideas from immigrants Andrew Grove, Jack Tramiel, and others).

Darius Milhaud, who escaped Nazi Germany's invasion of France in 1940, had a long, important career in the Bay Area, as composer and renowned faculty member at Mills College. Immigrants became members of the orchestra, which played in the War Memorial for the SF Symphony, SF Opera, and SF Ballet.

And then, more recently, in the immediate aftershock of 9/11, Michael Tilson Thomas and the SF Symphony responded magnificently, even while panic and fear gripped the whole country. The day after the Twin Towers came down — yes, on Sept. 12 — an almost fully occupied Davies Hall witnessed an extraordinary Mahler Sixth Symphony. As I wrote at the time:

In the shock and confusion on the day after 9/11, once the sound of Mahler’s anguish reached out from the stage, there was no one among the musicians or the audience staying outside, looking in. An instant community was born, it coalesced in experiencing the pain and beauty of the Sixth. There were tears, but also a temporary closure, a tentative catharsis.”

Through the challenges and tragedies of recent times, both the city and its rich musical life endured and prevailed. The reasoned hope is that this will be true once again.

The show has gone on through great quakes, depressions, and wartime, but COVID-19 presents a confounding set of new challenges.

Leta Miller's book Music and Politics does what few histories or musicological studies do: offers a lively and entertaining read dealing with San Francisco's history of classical music.

SFCV’s founder and long-time writer on the S.F. Symphony reviews its new official history and reports for the first time on some of what he witnessed that didn’t quite make it into the book.