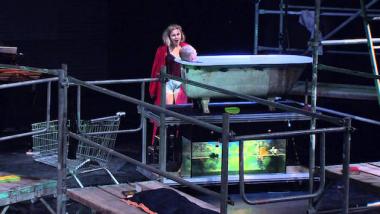 The season runs from October 8, 2016, through May 28, 2017, with performances at the Yerba Buena Center for the Arts and at the San Francisco Conservatory of Music. Opera Parallel’s founding Artistic Director and conductor Nicole Paiement will conduct the Glass and Dove performances. The creative team is lead by Brian Staufenbiel.

“The new season typifies our philosophy of giving wings to significant contemporary opera in intimate venues,” Ms. Paiement told us the other day. “This season we explore the meaning of ‘home.’”

“We began with a core opera, which is Jonathan Dove’s Flight, a story taken from the headlines that underscores the tragic and sometimes absurd plight of refugees. And then we chose a new children’s opera by Christopher Pratorius about the bittersweet leave-taking and homecoming experiences of immigrants in San Francisco’s Mission district. And finally, to celebrate the 80th birthday of Philip Glass, we present his hybrid opera-dance spectacle, Les Enfants Terribles.”

Glass’s Les Enfants Terribles is one of the three Cocteau chamber operas Glass wrote in the mid-90s, each one experimenting with a different method of bringing an iconic film to the stage. Les Enfants uses dance interwoven with the singing in order to conjure up the imagistic fluidity of Cocteau’s text and visual style. It’s a work that challenges the straight-ahead narrative techniques of classical opera and features Glass’s signature minimalist arpeggios.

Ms. Paiement has long had a special affection for this story, which she was introduced to as a child. “I read Cocteau’s novel and then saw the film and became very attracted to what this theme of belonging has come to mean in our society — sometimes feeling so lost and obsessed that you wonder whether you belong to this world at all.”

As an artistic enterprise, Ms. Paiement was also drawn to Philip Glass’s reconstructions of the story, including the role of a narrator who occasionally addresses the audience directly.

Ms. Paiement’s inclination was to balance Glass’s work with Mr. Dove’s Flight. We wanted to give the audience a chance to see Dove, whose work isn’t well known in the Bay Area

Jonathan Dove is an English composer who writes in an “accessible” idiom based on traditional sonorities, styles, and harmonies in European music. Flight, a comic opera, was his breakthrough effort in 1998. Since then he’s had a number of high-profile premieres. Although not a critical darling (too “conservative” for many critics), his music draws legions of opera fans.

Dove is also a good fit for a company that has a Hands-On opera program for kids. He has written several operas for children and last year Mansfield Park (2011) was given its U.S. premiere at Peabody Conservatory of Music.

Xochitl and the Flowers is a new children’s opera by Christopher Pratorius, based on the book by Jorge Argueta. The production is a world premier and the result of partnership with Alvarado Elementary School’s 3rd-grade Spanish-immersion program, Xochitl and the Flowers is also part of Opera Parallèle’s acclaimed annual Hands-on-Opera program, which features children center stage as full project participants and performers. Based on real-life events in San Francisco’s Mission neighborhood, this quintessentially American immigration story tells the tale of a family’s determination to put down roots in a new country, while still preserving the heritage of their homeland.