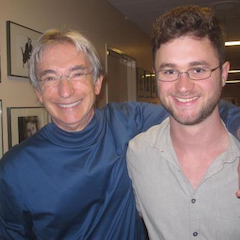 Imagine you’re a 25-year-old composer and you get a gig with the San Francisco Symphony under the starry baton of Michael Tilson Thomas, no less. Your 20-minute piece is the warmup act for Mahler’s Symphony No. 5, and what an honor. What a way to come of musical age.

In this case, you are Samuel Carl Adams, a member of America’s loose musical aristocracy, if you will; his father is John Adams, that interpreter of eras, a kind of historian, best known to the public for his 1987 opera, Nixon in China, and for his 2002 Pulitzer Prize-winning piece, On The Transmigration of Souls.

That leads to an always sensitive question … You wonder how much of a role Sam’s father, closely connected to the San Francisco Symphony, played in getting this gig for his son.

”People who are aware of where I am from might assume a connection, but in fact my father is completely hands-off. And we’ve never had a relationship where he made all the decisions. In fact, we rarely even talk about music. I’m very careful about these kinds of decisions.”

Sam Adams is also, by his own account, highly entrepreneurial, and throughout his brief career has had to convince people to take on his projects.

Sam’s arc is roughly Suzuki, Crowden, Stanford, and Yale. And now the life of a composer drawn to electronic music. It’s an attraction that began as a little kid. And then, at 10 or 11, — not to mythologize the moment — he heard his father’s Light Over Water.

“Not one of his best known pieces, and it’s kind of droney, but at the time it was similar to music I’d been listening to and I loved it.”

And so Sam, who never had much of an interest in acoustic music — because it was so “ingrained,” because there was nowhere to go with it in his mind — became increasingly interested in the creative possibilities in electronic music. “It’s not to say I don’t love working with acoustic, but there’s more of a focus on grammar as a composer, it’s hard to make new sounds. I feel very free when I work with electronics.”

And what about having your piece played by the San Francisco Symphony?

“It’s all very exciting and intense, especially to work with one of the best symphonies in the world. But there’s also a strange feeling because while I live in New York I’ve spent so much time on the West Coast and so this becomes a kind of musical introduction to my past.”