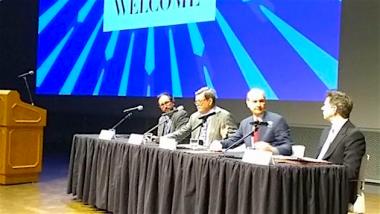 There was no need to disarm weaponized bullet-point generalities at the San Francisco Opera’s annual membership meeting on Thursday. They were quite harmless to begin with.

“OUR VISION: To crack the code on producing big art in the 21st century”

SFO General Director Matthew Shilvock also enumerated results of what is advertised as a comprehensive “strategic vision,” sorted into two strangely distinct groups: “Our Vision” and “Our Values.” The former, without specifics or elaboration, touts such points as:

Shilvock’s portion of the two-hour long meeting in the packed Atrium of the Wilsey Opera Center was devoid of specifics or even mentions of recent major cutbacks. The enthusiastic presentation contrasted with some of the more forthcoming and somber reports of the past.

These and other bullet-points came from a study of company goals, exploring "the full strategic process," ordered by Shilvock when he took over from David Gockley. It was executed by a Lisa Erdberg-chaired committee of 18 board members and managing directors. The project was facilitated by Emily Hall of Olive Grove Consulting, and supported by a grant from the Hewlett Foundation.

With slogans filling the air, nothing was said of measures countering both values and visions, such as the unannounced reduction this year of the all-important chorus in Billy Budd to 40 from the last production’s 55 singers.

This and other recent economizing measures indicate the possibility that “cracking the code on producing big art” and “pioneering new approaches to producing large-scale opera” may mean reducing “big art,” scaling down “large-scale opera.”

Other presentations, by SFO Board Chair John A. Gunn and S.F. Opera Association President Keith B. Geeslin, also were general and nonspecific, such as Gunn calling on elderly supporters to stay healthy to be around for the Opera’s centennial season in 2022–2023. Geeslin praised the administration’s “new programming focus on the core audience,” but without spelling out its meaning.

Geeslin, who lauded last summer’s Ring production, which drew audiences from 49 states (with Mississippi as the lone absentee), also mentioned Billy Budd and the Marriage of Figaro in the fall season, but not the opening, Gounod’s Roméo et Juliette (which may be slightly off “core”).

The specifics came with a presentation by SFO Chief Financial Officer Michael Simpson, who dealt with the company’s recent high draws from the SFO Endowment --- 9.6 percent and 9.5 percent, respectively, in fiscal years 2016 and 2017 --- reduced to 4.5 percent for the current fiscal year (FY 18), aiming at 5 percent next year.

The question period went by without a single inquiry about recent major changes in company leadership, including the elimination of several top positions, or about expected/rumored further cutbacks.

Shilvock parried a series of questions with quick and courteous replies:

- Is a new music director being named? No, “we are still in the dating phase, taking time to find the right person.”

- Will chamber operas return to the Wilsey Center Atrium? No, there are “financial constraints” and companies such as West Edge and Opera Parallèle “serve the region’s opera ecosystem.”

- Will the company return to Stern Grove? No, the timing is difficult.

- Will the live ballpark simulcast, skipped last year, come to the newly-named Oracle Park of the S.F. Giants? No, and during last summer’s Ring cycles, Shilvock said, to general amusement, Siegfried might not have worked well.

- Will KQED-TV resume telecasting SFO recorded performances? “We are in talks.”

- Will broadcasts resume on KDFC-FM? “No, but we have the Opera Hour at 8 p.m. on the first Sunday of each month.”

- When will seats be replaced in the War Memorial? “Next few years.”

- Will supertitles be moved to the back of seats, as is the case at the Met and other companies? No, the cost is about $3 million, and the current projection above the stage works well.

Veteran Director of Communications Jon Finck gets his walking papers.