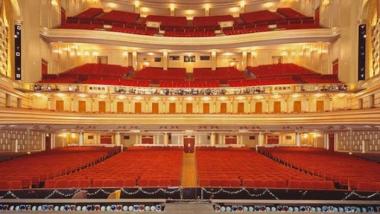 Beyond the word that some major San Francisco Opera officials such as the directors of communications and development will be laid off at the end of March, the even more weighty news from the Veterans Memorial is that their positions and others will be abolished and four open positions will not be filled.

Director of Communications and Public Affairs Jon Finck, with 16 years in the SFO administration, and Director of Development Andrew Morgan are among those laid off by General Director Matthew Shilvock, who told SFCV today that budget considerations necessitated the move:

We honor all those who have brought us to this point and celebrate the impact and contributions of those who are now leaving. They are all deeply dedicated members of the company, and it has been a privilege to work alongside them.

As difficult as this moment is, as a creative art form we must keep looking forward. We must embrace change, new ideas and new possibilities — and we must take the steps required to meet the challenges of our time. If we can fully align ourselves with the company’s new strategic framework, rebalance the expense budget, bring our revenue goals to a realistic level and continue to build our endowment, an exciting creative pathway forward emerges.

The actions — announced internally at a Feb. 28 company meeting — are expected to save about $5 million a year, which is the amount by which the projected SFO budget is reduced from $76 million to $71 million.

Fiscal Year 2016 had an operating budget of $78.3 million against revenues of $77.3 million, leaving a deficit of $500,000; the following year expenses were reduced to $75.6 million, but income fell to $74.9, so the deficit for that year increased to $700,000. For the past two years, withdrawals from the endowment reached 9 percent: Shilvock said that trend cannot continue and deficits must be controlled: “To bring expenses into line with realistic revenues, we determined that expense budgets need to be reduced by $5M per year, and that we cannot affect our core mission: [presenting] compelling, inspiring opera at the highest level of excellence.”

Shilvock said “the revenue situation is a multifaceted one with excellent news on the subscription front,” and counting on the incredible generosity through the quiet phase of an endowment campaign” in advance of the company’s centennial in 2023.

General Director Emeritus David Gockley, with whom Shilvock worked during Gockley’s decade-long tenure, analyzed the situation at the company’s annual meeting five years ago with a foresight that is relevant today:

There are structural problems we face as a company and some of the systemic issues facing the industry as a whole — the slowly declining role of subscriptions, the difficulty of balancing budgets, the lack of bankable stars, the marginalization of the classical arts in education and the mass media, the plethora of competing entertainment forms and opportunities ... that compete for the time and attention of people who could be going to the opera.

Looking forward, the essential questions are: How do we build our audience for our second century? How do generate enough annual income to be world-class? The minute we slip below this watermark, we could find ourselves in a downward spiral that we may never be able to pull ourselves out of.

Are these new cuts and rollbacks five years later part of a downward spiral? Shilvock says not:

“These changes will allow us to continue the critical work of connecting audiences to great opera within the revenue realities of the current time, and are consistent with the new mission, vision and strategic framework that the San Francisco Opera board adopted in June 2018.”

He specifically promised that even with “a series of adjustments to nonpersonnel costs and ... fine-tuned reductions to the rehearsal calendar,” San Francisco Opera will “produce eight operas each season at a world-class level of excellence.”

Departments now without a top executive will be managed in the Department of Marketing, headed by Lisa Bullard. Otherwise, Shilvock said, “we are reframing our Education and Media departments with more specific information to be shared at the end of April.”

Four currently open positions will not be filled, including that of Publications Editor, recently vacated by Matthew Erikson, who is now with the Boston Symphony. Publications usually require more time to produce program books and other material than the three months now available before the summer season begins.

In the Communications and Public Affairs Department, among Finck’s many recent accomplishments is the creation of “Looking Through the Lens: The Glory of San Francisco Opera,“ an exhibit of archival photos from the company’s history, lining the walls of corridors in the Diane B. Wilsey Center for Opera.