The San José Chamber Orchestra, joined by the Delphi Piano Trio, will give the world premiere of not one, but two commissioned works at its March 20 concert.

“In much more of the history of classical music, people have performed music of composers who are alive, not composers of the past,” says SJCO founder and music director Barbara Day Turner. “It’s a living art form, and the way it stays alive is through the works of people who are living.”

The SJCO has dedicated itself to uplifting the work of living composers, commissioning an impressive 12 new works for its 2021–2022 season.

Assad’s A Story of Mermaids, one of last year’s commissions, is a direct response to Beethoven’s imposing triple concerto. The work, Turner says, exemplifies how new music can feel right at home when placed next to the old. And for audiences who may be wary of “new” music due to its association with harsh avant-garde sounds, Turner assures this is not one of them.

Assad’s concerto explores mermaid mythology from around the world — from the mermaid Melusina to the Brazilian killer siren Yara, who seduces men with her chant and kills them. Syrinx, an ancient Greek water spirit, and Ondine, a European water nymph, also make special appearances in the piece; audiences may recognize musical quotations from Debussy’s Syrinx and Ravel’s Gaspard de la Nuit (Gaspard of the night).

“Mermaid tales are often tragic due to their recurrent themes of impossible, conditional love of a being who cannot find peace or balance between her desires and what she receives,” Assad says. “However, this piece explores [the mermaid’s] consistent eternal flow state, seemingly with the water element.”

The concerto can also be interpreted as one that explores female empowerment and agency. Indeed, the mermaid in the piece ultimately falls in love and wants to settle. But she refuses to become a captive; instead, she is on a “mission to captivate,” Assad says.

The premiere of this work is particularly timely, given the Delphi Piano Trio’s commitment to celebrating the work of both living and forgotten women composers. (On May 1, the trio will perform a program highlighting women composers, including Clara Schumann, Lili Boulanger, and Gabriela Lena Frank, as part of the San José Chamber Music Society’s concert series.)

Until the 20th century, it was considered “unseemly” for women to undertake creative pursuits, says Delphi violinist and San José Chamber Orchestra concertmaster Liana Bérubé. Without meaningful opportunities to collaborate with other artists, women composers were left to create music in isolation, she adds.

In most parts of today’s world, that is no longer the case — and thankfully so. Still, there is much work to be done to advance gender equity in performing arts spaces; a study of concert programming by major American ensembles conducted by the Women’s Philharmonic Advocacy found that in the 2021–2022 season, women composers’ work comprised just 15 percent of total works performed.

For Bérubé, having the opportunity to bring to life new music written by women composers with a group of “fairly formidable” female musicians is something quite special. “Personally, there’s an element of reclaiming my own identity and making peace with that, or even encouraging it to emerge more,” Bérubé says.

Judging from the creative work Turner has witnessed while working with young composers, the future of composition is alive and well, she says. “It’s a very exciting future and a very exciting time to be able to be presenting new works.”

Iris Kwok is a journalist based in Berkeley, CA. She plays the cello and studied music, among other subjects, at the University of California, Berkeley. 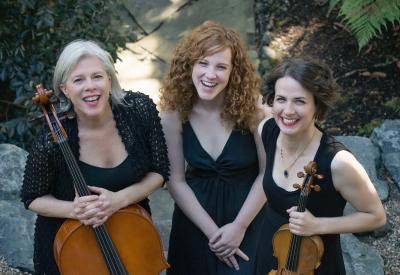 The tiny but mighty chamber orchestra is not letting grass grow under its feet.

In a brilliantly curated concert, the SJCO offers meditations on climate change, humanity and technology, and the natural world.

The artistic director of San José Chamber Orchestra will be feted in a charity concert with donations designated to go to her orchestra.

The Passions of Stephen Rubin, Publisher and Music Lover

Perceptions of Freedom Overlap and Collide in FRE!HEIT

Music of the Heart: Noontime Concerts to Highlight the Evolution of Spirituals