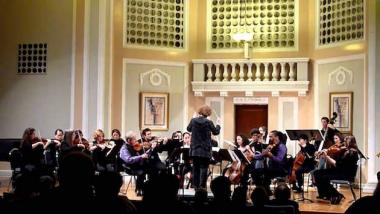 The San José Chamber Orchestra, conducted by Music Director Barbara Day Turner, gave a concert at the Trianon Theatre on Sunday, March 25, that would warm the heart of anyone concerned with showing that contemporary classical music is alive, vigorous, and addressing today’s concerns.

The bill of fare consisted of five short pieces: two first performances, one other, new co-commission, another fairly recent work, and a fairly new arrangement of an older work. Three of the four newer works were by women.

The contemporary issues addressed by this music also reinforced a theme or two. Two depicted the natural environment and the human response to it; one consisted of the meeting of live music with electronics; and the remaining two dealt with both these issues at once, in varying ways.

The more thematically austere bit of electronically-enhanced music was also the only work of the evening without orchestra. This was the co-commissioned work, a bit of concentrated introspection by Vivian Fung for solo cello and pre-recorded electronics. The title, Humanoid, intends to reflect the cello mediating between the human and the mechanical. Fung’s style tends toward the brittle, and this piece exploited that proclivity.

For much of the piece, guest cellist Coleman Itzkoff exchanged gnomic utterances with the electronics. He would play crescendo slides, and the electronics would respond variously with buzzes, static, ringing bells, metallic tinkles, the sound of typewriter keys, or whatever. Over time the cello became harsher and more imperative, and when the electronics became a pop music drumkit, Itzkoff jumped right in with it.

The non-electronic works responding to nature were composed by the two senior composers on the program, Antonín Dvořák and Thea Musgrave. Dvořák’s 1883 piano piece Silent Woods was recently arranged by local composer Kerry Lewis into a subdued cello concerto, which Itzkoff played in a smooth, detached manner. The more energetic cadenza was left to SJCO concertmaster Debra Fong.

Musgrave’s Green, composed in 2008, is an allegorical depiction of the intrusion of humanity on nature. Nature opens as consonant but emotionally cool intertwining lines, in a traditionally British academic manner, in the string orchestra. Suddenly the double basses intrude with a buzzing dissonant note. This dissonance repeats, the cellos are added, and the rest of the music becomes more disturbed and agitated, eventually mutating into a more searing soundscape plateau.

A similar trajectory is followed by one of the first-performance commissions. Judith Shatin’s title, Ice Becomes Water, tells the story: this depicts glaciers melting through climatic warming, taking the listener through a variety of styles on the way. Here the electronics are intermingled with the orchestra instead of exchanging dialogue, as in the Fung. Shatin depicts glacial ice, in both media, as high, held, piercing sounds. Gradually, as the ice melts, the pitch goes lower: cracking, pouring, and gurgling sounds in the electronics, with harsher drips, disruptive chords, pizzicato snaps, and an increase of chaos in the orchestra, eventually drowned by the electronics. The work ends with a lament in the strings over a deep rumble in the electronics.

Classify this work along with John Luther Adams’s Become Ocean, which also depicts the role of water in climate change, and that leaves me knowing of as many composers concerned with climate disruption as science-fiction writers with the same interest.

The final work and other first performance, In a State of Patterns by William Susman, applies its computerized contribution visually. Susman was inspired by the mathematical art of Santa Clara University professor Frank Farris, who took photographs of nature scenes in California and transformed them into animations of slowly shifting, symmetrical geometric patterns, resembling the originals mostly in color schemes. These were projected on a screen as the music played.

Susman’s inspiration from Farris’s work is gratifyingly direct. Farris uses a musical pitch as numeric input in the algorithms for creating his animations, and Susman has built his harmonies on that, but to hear a correlation doesn’t require understanding this. Where the photographs and their colors are bright and warm, the music is bright and warm; when they turn cool and quiet, so does the music. When the animation lays out regular patterns, the music uses regular patterns; when the animation swirls, the music swirls.

None of this mirroring feels affected. The patterns are in keeping with Susman’s generally post-minimalist style, and I think the music would be entirely satisfying without the visual element.

All these composers write in an entirely contemporary idiom, using techniques of recent vintage, avoiding the abstractions and dryness of 20th century high modernism without reverting into post-romantic populism. Their music uses dissonance and consonance to set moods; it conveys its ideas with clarity but without simplicity. The concert formed a good sampling of worthy music being written today, and the San José Chamber Orchestra performed it with assurance and directness.

The San José Chamber Orchestra celebrated Johann Sebastian Bach on Sunday and the evening began with a bang.