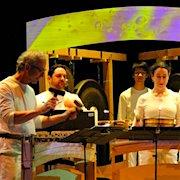 Feel The Pressure at the Other Minds Festival

By commissioning composer Brian Baumbusch for the evening-long multimedia piece titled The Pressure, Other Minds has opted to present a horror show. But what audiences and performers at the Yerba Buena Center will experience on the opening day of the Other Minds Festival on June 15 will be much more than that.

“The elements all work together miraculously well,” assures Sam Cushman, a member of Baumbusch’s Lightbulb Ensemble, one of several groups and artists involved in the production. “Brian has been able to bring together threads of his musical life, whether it’s the instruments he’s built (based on Balinese music systems) or the singing quartet (which is more like a Greek chorus), or the strings [the Friction Quartet]. He’s doing this in a way that to me feels very organic and genuine, and not like a forced mashup or fusion.”

And there’s more: A narrator (the composer), backed by projected intertitles (familiar from silent movies) and illustrations (by Spanish graphic designer Fede Yankelevich), will tell the tale in 15 scenes of a town beset by the titular barometric extremities, as well as by hail and demons. The audience will also hear a Leslie organ synthesizer, tubular bells, and a Disklavier-cum-player-piano.

Baumbusch, who now lives in Alameda, credits his slightly older brother with helping to bring the project to life. An award-winning playwright and poet who lives in northern Michigan not far from where both siblings attended the Interlochen Arts Academy as teenagers, Paul Baumbusch is described by his brother as “a bit of a hermit, a gay man who’s struggled to find love and has been oppressed by cities. Our first time really collaborating was when he wrote stories for Hamsa [2016], five allegorical tales based on the Five Pillars of Islam.” For The Pressure, “he was going on a kick of watching old horror films — we’re both film freaks — and he wanted to write his own horror story. [Trump] was elected just before we premiered [Hamsa], and we were wanting to do something from a period on the brink of fascism. It’s the right allegorical message to send at a time when the cultural zeitgeist is sort of returning to something like that.”

The Baumbusches were raised in Virginia (as was Cushman), where Brian took lessons with a classical vocal coach and classical guitar lessons before transferring to Interlochen to join Paul, who was studying creative writing. The younger brother wrote a string quartet at age 15, studied flamenco music in Spain, explored West African music, and spent time in Argentina learning and recording Argentinian folk songs.

“I came to Balinese music a little bit later,” says Brian Baumbusch, “because it grabbed me as music which wasn’t necessarily vamping on improvised forms, and was orchestral.” After high school, he applied only to Bard College, about a hundred miles north of New York City, because of Bard’s offerings in the dynamic form of gamelan, an orchestra of mostly metallophones and gongs which dates back in Java and Bali as far as the 8th century.

Also attracting Bambusch’s curiosity were the tunings and acoustics of the gamelan, “where the keys vibrate and they’re extremely inharmonic in their spectra.” He explains that the bronze keys, when struck, produce variations in the overtones, quite different from the “sterile” sound of the uniform overtones of a bowed violin, and “I have a theory that inharmonicity, or its combination with harmonicity, is a lot of what attracts us to music.”

The sound of the gamelan was also a siren for Cushman, another native Virginian who’d grown up enchanted by his parents’ jazz record collection and had played sax and drums in school and gigged in the Charlottesville rock scene before exporting his musical interest to Afro-Cuban percussion and tabla. At the University of Virginia, he studied ethnomusicology with Michelle Kisliuk, and then decided to continue in that field at UC Santa Cruz, where he encountered Baumbusch and gamelan.

“What’s fascinating about Balinese tuning is the way the instruments are tuned in pairs,” opines Cushman. “If you have two pamades [one type of gamelan gong] side-by-side, they’ll be tuned a few hertz apart, enough that if you hit one and then the other, you get this shimmering effect, from the beat frequencies. That the music is built on these wave forms happening in the air is exciting.”

Baumbusch found that his interests in gamelan and microtonality were shared by many of the minimalist musicians of the later 20th century, including Steve Reich and Kyle Gann, a professor at Bard who introduced Baumbusch to Conlon Nancarrow’s music for player piano. “I also had hopes,” Baumbusch recounts, “to get into the New York Downtown scene, with the Bang on a Can people.” After graduating from Bard in 2010, Baumbusch moved to Boston, composed for Evan Ziporyn’s Gamelan Galak Tika, and “pretty much spent a year up and down the Northeast corridor, playing in various gamelan groups.”

The legacy of Steve Reich and Lou Harrison, both of whom had adapted elements of gamelan, is part of what inspired Baumbusch to pursue a master’s degree in composition at Oakland’s Mills College. He continued creating a handful or works for gamelan. For Mikrokosma, he collaborated with Wayne Vitale, a founding member of Berkeley’s Gamelan Sekar Jaya. Vitale and several other members of his group later joined Baumbusch’s Lightbulb Ensemble as part of his Mills masters’ thesis project, Prana.

American gamelans, notes Baumbusch, helped bring the form “into the circuit of ‘serious music,’ not just some world music sideshow. It became obvious with Balinese music that it was a through-composed thing that’s very heavily orchestrated and very dynamic.” By the same token, American exponents have been rightly sensitized to charges of cultural appropriation. Michael Tenzer, a cofounder of Gamelan Sekar Jaya, confided to Baumbusch that he’d brought one of his compositions for two gamelans to Bali, where one of the native musicians “was upset with the modernism and complexity of it, and said something like, ‘is this what Balinese music is going to turn into?’

“It’s also one of the reasons why I decided early on to start building my own instruments,” Baumbusch continues. “I felt that the minute I start playing on instruments I built myself and tuned myself, it’s less of a cultural problem than if I have these extremely ornate Balinese instruments, which oftentimes have religious affiliations.” Bali is predominantly Hindu, and the most globally influential piece of gamelan has been the instrumental and choral setting of a Hindu myth on David Lewiston’s 1969 recording, for the Nonesuch label, of the mesmerizing Balinese kecak, or monkey chant.

After joining the faculty at UC Santa Cruz (where his students included Cushman), Baumbusch fashioned a gamelan set close in tuning to the university’s traditional set but expanded from five tones to seven. On the model of instruments created by Lou Harrison (also housed at UCSC), Baumbusch switched from traditional bronze to more easily machinable aluminum keys, whose tones are amplified by resonators. For The Pressure, the Lightbulb Ensemble will perform on these metallophones and gongs, joined by xylophones with wooden keys and by Wild Rumpus, a San Francisco Conservatory chamber group, as well as the instruments mentioned earlier.

“When I started writing this music, I started listening to a lot of different types of music,” Baumbusch recounts. “I got back into Mahler’s Third, which I was really into when I was a teenager, a lot of Stravinsky, including A Soldier’s Tale, a ton of Sketches of Spain [Miles Davis and Gil Evans], and a ton of early music. Probably more importantly, I watched maybe 150 horror films and took notes on the soundtracks. Because this is one of the biggest spotlights I feel I’ve been in as a composer: Other Minds being a big organization, and Yerba Buena [having] a great stage. And the horror genre really helps, because at some point I figured, I can just be as schizophrenic as I want and say that it’s all under the guise of referencing different horror cliches from the last century. There’s one part that’s very much like a madrigal, a toccata that’s like a two-part Baroque keyboard invention, and a very traditional gamelan piece. A lot of different things.”

“If all you’ve heard is equal-tempered music and you sit down in a room with Balinese gamelan, it could be pretty jarring,” adds Cushman, with a laugh. “But if you’re already interested in experimental music, or just pushing past what you’ve already heard and finding new things, then a jarring experience might be a moment of profound excitement and joy.”

The festival's third day questions how we communicate when sounds and meaning are divorced.