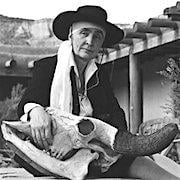 Composer Laura Kaminsky’s big-bite idea to write the score for a contemporary opera inspired by the life of Georgia O’Keeffe suits the grand genre and subject matter. It also begs a question: How to portray in music, words, and visual design the American modernist’s vast vision that forever altered the landscape of visual art?

Kaminsky’s answers? Seek truth, turn to collaborators you know and trust—and don’t try to swallow the whole whale at once.

Opera Parallèle’s ambitious new chamber opera Today It Rains will receive its world premiere in San Francisco in March 2019. Under the leadership of Artistic Director Nicole Paiement and Creative Director Brian Staufenbiel, it is a co-production with partner American Opera Projects. As part of the Hewlett 50 Arts Commission’s, a five-year, $8 million initiative to support new works, Opera Parallèle will conduct free, public programs and workshop sessions this year in Santa Cruz, May 29–31.

“In 1929, O’Keeffe took a three-and-a-half day train ride between New York and Santa Fe,” says Campbell during a phone interview in early May. “It was for her, a moment of complete transition. She felt she had to leave behind New York because her last show displeased her. She thought it was phony, although it was critically well-received. The idea to set the opera on the train was mine.”

Thus, grand timeline and setting were down-scaled in duration and location. Even so, a universal theme emerged as Campbell researched, even taking the same train ride twice, once alone and a second time with Reed to gain experiential reference. “Every person in the world has the potential for finding expression,” he says. “The train trip is (metaphorically) a human journey to find self and fulfillment.”

Campbell wrote O’Keeffe’s final aria of arriving in Santa Fe while he was himself arriving in Santa Fe. “One line in the libretto means a lot to me: “The sky means more here.” That’s where I felt a big connection to the character. She was struck by the natural beauty of New Mexico. That guided the text.”

O’Keeffe left behind not only New York and her artistic frustrations but a difficult time in her marriage to photographer Alfred Stieglitz. The trip was like a prison break that resulted in unexpected, hard-won personal freedom and long-term, artistic rejuvenation.

Campbell’s personal motivation—to write a counter narrative to his mother’s life as a painter who he says never had the choice to follow her creative impulse—added urgency and dimension to the text. “Audiences tend to not understand the music is driven by story, which is in the libretto. One of my early emails to Laura was that there must be joy and lyricism, not only anger or fury. There’s conflict, but it’s ultimately a woman realizing who she is and what she wants. I don’t tell Laura how to write the music. I only provide text that will inspire her best work.”

Kaminsky, selecting eight singers and an eleven-member instrumental ensemble to retain intimacy while still allowing for “big sound when you need it,” says in a separate interview her first step was to search the libretto for moments of truth. “The libretto is the building block. What is the music that reveals its truths? That sets the musical journey.”

Creating a sound world with the ensemble (flute and bass flute, clarinet and bass clarinet, bassoon, French horn, string quartet plus double bass and two percussionist who play 30 instruments, including an ice-cube-filled cocktail shaker), was fascinating, she says. Although people at the workshops in Santa Cruz will hear only piano versions of the score, she describes motifs, style and orchestral elements that will establish character and emotion.

“Fragments of melody or rhythmic bits will be assigned to different instruments or sections to create a color field. The train itself has a motif. The porter on the train is assigned the clarinet. He’s a guide who safeguards the journey. Every time he appears there’re musical moments that cue the listener to say this is the guy, the messenger, giving Georgia the way to go on.”

Urban, modernist, angular music that finds roots in jazz she says underscores the porter’s message: “She’s searching, seeking. He tells her she has a right to find herself.”

Public workshops, Kaminsky and Campbell agree, are invaluable. Everyone is nervous, but eager for feedback: singers want to show their best work, says Kaminsky. Meanwhile, she wonders, “Did I make the right piece? Do people’s hair stand up on end when O’Keeffe’s fear of change is expressed in the sound?” Campbell, who says he writes for the audience, learns if what works on the page resonates when it is performed. “I’ve written over 25 operas and about half of them have gone through workshops. They’re about clarity: Is the story clear? Afterward, I’ll have a list two pages long of words the audience isn’t understanding, I’ll know what’s not deep enough and needs more words. What needs to be cut.”

Ultimately, the interaction will send the trio back to the canvas for granular, technical revisions and new, large strokes, like those of O’Keeffe. What will not change or diminish is the whale at the center of it all: O’Keeffe, a person whose courage and commitment to her art and search for fulfillment stretched from New York to Santa Fe and beyond.

Tuesday, May 29, in Santa Cruz

Wednesday, May 30, in Santa Cruz

Thursday, May 31, in Santa Cruz