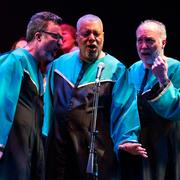 It’s not often that a song changes an entire musical genre, let alone several. Rarer still does one performance of a singular song dig a groove so deep that a culture shifts and generations later the tune continues to enthrall audiences worldwide.

The late Edwin Hawkins and the Edwin Hawkins Singers performed his R&B, gospel-infused arrangement of “Oh Happy Day” in 1969. The song that was adapted and first recorded by the Oakland native in 1968 with the Northern California State Youth Choir (the album was Let Us Go Into the House of the Lord), reached No. 4 on the U.S. Billboard Hot 100 chart and sold more than one million copies in two months. It went on to win for Hawkins and his choir a Grammy award in 1970; eventually the single sold over seven million copies internationally. Hawkins died January 15, 2018, at age 74. His version of “Oh Happy Day” remains the largest selling gospel-pop crossover single of all time.

So when Terrance Kelly and the Oakland Interfaith Gospel Choir stride onto the Edwin Hawkins Memorial Gospel Stage July 28-29 at the 18th Annual Art + Soul Oakland Festival, a tribute to Hawkins will be embedded in every musical note, hand clap, foot stomp, body sway, arm raised, and soul-soaring “amen.”

While Kelly, in mid-July, is still developing the playlist for the choir’s performance, he’s already pegged one piece that’s certain. “We’ll sing ‘Kings and Kingdoms,’ which we call ‘There’s Something About That Name’ (taken from Hawkin’s 1994 album of same name). The jazziness of it is like the jazzy, gospel nature of Ed, which is very dear to me. I grew up hearing Ed’s chords and relating them to my father, who was also an Ed and a pianist, so it’s meaningful. We sang it for Ed [Hawkins] at his 70th birthday tribute also.”

Kelly says “Oh Happy Day” “changed the face of gospel.” Afterward, churches that never before allowed anything other than straight hymns began to feature music with club-like jazz chords and pop-style arrangements. “That song crossed over every level of the church,” recalls Kelly.

Aliya Hall, an up-and-coming 20-year-old singer from Oakland who will join the roster of gospel musicians on the Hawkins Stage, says she hears commonalities that travel from traditional gospel and Hawkins’s mega-hit through to jazz, soul, R&B, pop, contemporary gospel, and even to hip-hop. “In this time of police brutalities and crazy things going on, you don’t have to be in the church to know our world is in desperate need of love. Revealing today’s problems in hip-hop lyrics, there’s also evidence of knowing that the remedy is love. That’s a commonality I’ve noticed recently.”

Hall grew up in a house of music. Her father is the leader of his own group, Derrick Hall & Company, whose music she says was her primary training ground, augmented by church singing. “I was 13 when he finally allowed me to sing with them. It was a passion for me, and I believe he saw that and took it to heart. He wanted to cultivate that in me.”

Hall released her first CD project, Great Praise, when she was 16 and a second, Butterfly, at age 19. “Sure, singing with my dad pushed me. It was a vital part of the journey,” she says. “It was intimidating, but it helped me to be around singers who were better than I was. To grow, learn, and stay at their level was discouraging sometimes. Eventually, I knew that just because there are so many amazing singers, I don’t think I’ll ever quit.”

Hall is most recently working on scatting, aiming to model after Ella Fitzgerald, who she says starts a scat that seems to have no direction but creates in the end a clear, arc-shaped phrase. “I want that technical skill to be second nature, so I can mix in singing from my soul and heart as well.” The vocal style she gravitates to and calls neo-soul and contemporary gospel has wide vibrations that create a smooth, deeply evocative sound. “It’s intriguing. What does that mean? I guess it’s music that you can’t completely explain but it satisfies the soul’s longing to feel good.”

Two songs from Butterfly that Hall wrote and will perform at the festival require opposite approaches. The upbeat, stand-and-clap pace of “God Is” demands breath control and stamina. She practices it to stay in shape even when she’s not scheduled to perform it. The slower, storytelling “Be You” requires ample time to unfold. Not rushing the phrases while maintaining the “spark” of authentic, church-style gospel is key. “One thing the Edwin Hawkins Singers did — not making the music super complicated — makes gospel be for everyone, regardless of skin color. I want to make music for black, white, brown — I want to make music for people’s hearts.”

Kelly, when he’s not talking to singers about projecting confidence or singing with accuracy and other technical aspects of vocal music, talks with the choir about triangles. “I tell them I need them to build a triangle: throw it to the audience, then to God, then back to the singer. You’re not throwing it up to God alone; they’re doing it with you. You have to give of yourself, it’s not tone or anything. It’s sharing. It’s difficult, because you feel naked, you’re baring your soul, sharing your story. For me it comes out operatic because that’s my training. Regardless of the genre, it’s the truth, there it is. That’s what comes out.”

While acknowledging Hawkins’s pivotal influence, Kelly highlights one thing that will never change about gospel music: “Across the microphone, you’ll hear, no matter what the future may bring, God is in control. It’s still the same message of hope. Sure, there’s more vocal risk by the younger people, with larger intervals, but it’s still based on the pentatonic scale. Yes, you’ll see mixed race and mixed everything in our choir, so you’ll hear everything. There were 13 different faiths in our February concert. You’ll hear all of that.”