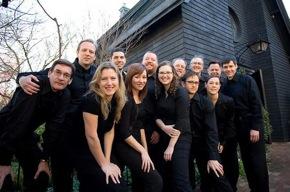 A Great Choir, Hidden Away in S.F.

The Schola Cantorum San Francisco will offer a wide-ranging program of Lenten music on April 19 at Noontime Concerts at St. Mary's Cathedral in San Francisco. The program highlights the grace and beauty of the Italian Baroque in all its sensual glory.

The shared textual basis of all the works on the concert might make the claim of diversity seem a bit surprising — the program includes four settings of the Crucifixus alone, a Stabat Mater, and various smaller works lamenting the death of Christ. But variety comes in the wealth of inspired music that director Paul Flight has assembled. The composers range from the endlessly fascinating Carlo Gesualdo,17th-century master of both Renaissance madrigalism and the expressive dissonances of the proto-Baroque, to Quirino Gasparini, a contemporary of Leopold Mozart and a musician equally fluent in antique church styles and the flowing melodies of the Classic era.

According to Flight, the concert’s centerpiece is Domenico Scarlatti’s Stabat Mater. Scarlatti composed this work early in his career (1715), before he moved to Portugal and Spain and started writing flamboyant keyboard sonatas in great abundance. The composer was then head of the choir at St. Peter’s Basilica in Rome, formerly led by no less famous a figure than Palestrina. This composer’s careful contrapuntal style became, in the perceptions of later generations, the definitive model for church music. Yet, as Flight is quick to point out, this so-called antico (antique) writing is not the only type of music in Scarlatti’s setting. In fact, Flight described this work to me as “astonishing . . . due to its variety of styles.” In addition to Palestrinian composition, the work contains “a graceful triple time dance, a stile concertato [a style that emphasizes changes in ensemble size and instrumentation], a chamber duet with choral interjections, a closing fugue, and an exciting amen that swings along, one to the bar.” Flight’s description alerts us that this is no overly somber Lenten piece; Scarlatti’s Stabat Mater possesses the rhythmic vitality and mastery of dance gestures for which he is today so renowned.

The Schola Cantorum SF is more than a dozen years old. It was founded at the National Shrine of St. Francis of Assisi in 1998, and is now an independent choir performing music from a wide time period, from the Renaissance to the 21st Century. Flight has been leading the group since 2005. He has a well-earned reputation for coaxing a beautiful choral sound out of his ensembles, and for presenting concerts as professionally stylish as they are interestingly programmed. This weekend’s concert offers an opportunity to hear rarely performed Lenten music from a choir and director of the highest caliber.