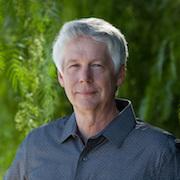 Mark Abel Reimagines the Art Song in Time and Distance

During a phone conversation with composer Mark Abel, geometry explains the variegated art songs on his new CD, Time and Distance.

within a triangle whose end points are classical, rock, and jazz music, the San Simeon-based musician’s fourth release under the Delos label curves to navigate text. Stark, sorrowful, soothing, soaring, and always poetic words written by Abel and California poets Kate Gale and Joanne Regenhardt project an array of warm colors quickened by the pinpoint sharpness of in-your-face subjects. There are the skewed frames of sexual or environmental assault, the startling angularity of suicide or forgiveness, the downward slope of lost dreams and urban landscapes, among other topics.

The topography of Abel’s music is variable; informed by melody, harmony, metronomic or asymmetric rhythms, electro-acoustic or minimalist structures that mesh to carve grand and diminutive moments. Text and score merge or counter each other not to do battle but even so, the effect is haunting. The five works’ timeless sounds linger like “auditory images” of remembered people, planets, spiritual spaces, and histories.

A surprise arises: What will the future hold and what will be its shape, sound, and texture?

Soft dimension is found in the first track, The Invocation, sung by mezzo-soprano Janelle DeStefano, which pleads for hope as it “offers courage.” Similarly, The Benediction bookends the album with an elegiac, anthem-like art song rendered with grace and power by soprano Hila Plitmann. Between the two, there is both claustrophobic darkness and fresh air — expressed through language and variably expanded with a clipped tempo akin to rock, organ, or percussion accompaniment, or other “disrupters” of traditional art song norms — a genre Abel says is “too much cloistered in academia.”

Abel’s history includes work in the 1970s and ’80s as a guitarist, bassist, songwriter, and record producer before transitioning into journalism and eventually serving until 2004 as the San Francisco Chronicle’s foreign editor.

“I was lucky because my father got me into classical music at an early age,” Abel says. “I then heard the greatest jazz musicians when I was 12. Then rock came into it a few years later. Around 2000, it all came into synthesis and that hasn’t changed. I’ve just been poking around into what forms I could get into.” His work includes a three-act chamber opera, a trio for clarinet, cello, and piano, and numerous song cycles.

About art songs, Abel is passionate—and practical. “I didn’t go into it on purpose. I just found it was the perfect way to get my ideas out. An orchestral score is extremely expensive. The economics shunted me in the direction of art song. Its starkness has helped me to crystallize my art form.”

Time spent abroad is likely another factor. Lieder are more popular in Western Europe than in the United States. If a string quartet is “naked” or, according to Abel, “a high wire act in that all four musicians must be in perfect sync with each other,” one solo singer and one instrumentalist are even more exposed. “If even one of them makes a mistake, it’s difficult. Audiences here are frightened by how intimate it is,” says Abel.

Abel’s compositional process is light years away from “crystallized.” Instead, he most often writes text and music simultaneously, purposefully not following the art song’s over-worn path that is restricted to setting music to existing poems.

“When I write, it comes from a mysterious place. It’s the imagery, more than the word sound that attracts me to a word. It can’t sound like a rant from one person. I don’t consider myself a poet: I’m a lyricist.” Later he adds, “I have a street view of humanity. I’m seeking to understand behavior and what makes people daring or timid. It has to spring up from deep in my internal self. Sometimes that takes years.”

Musically, Abel avoids suppressing his rock background. Ideas that find their genesis in rock or jazz are transposed to classical instruments: “I’ve infiltrated art song: Some people hear it and run away, some run towards it. My stuff is its own breed.”

Compiling emotions, ideas, and musicians for an album, Abel’s concern inevitably becomes “whether or not it all hangs together.” Beyond the individual compositions, the framing of a CD must eventually “line up.” Time and Distance, Abel says is a set that keeps people’s attention while hitting on various territory. The darkness expressed is balanced by hopeful messages for humanity. Undergirded by historic, formal structures found in classical music, sometimes skewed by rock ’n’ roll influences or opened to jazz music’s improvisation and alteration, Abel’s future vision of art song draws a broad circle and therein returns to geometry.

Another Composer Thinks About the Fullness of Silence

Yves Klein’s Monotone-Silence Symphony only appears to be off-the-wall experimental. Actually, it’s a modest experiment and a captivating experience

The musical future is in good hands with these composers, all of whom qualify for the adjective “young.”