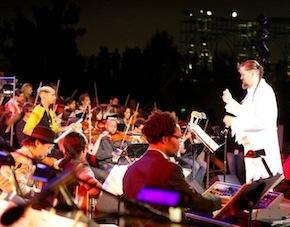 The Mill Valley Film Festival returns this week for its 34th season. It runs from Oct. 6 to 16, with screenings in Mill Valley, Corte Madera, and San Rafael. Bay Area music fans will find a handful of interesting offerings among the festival’s impressive roster of over 100 films, including three documentaries that focus on Californian contributions to the world of music.

Play Like a Lion: Legacy of Maestro Ali Akbar Khan

The most ambitious of these films, and the one most intimately tied to the Bay Area, is the U.S. premiere of Play Like a Lion: Legacy of Maestro Ali Akbar Khan, directed by Joshua Dylan Mellars. The film is the latest installment in a trio of documentaries about the musics of different parts of the world. In this feature-length film, Mellars explores the musical connections between Northern California and the Indian subcontinent. It tells the story of Ali Akbar Khan (1922-2009), great master of the sarod. Khan served as guru to generations of Californians from his residency at UC Berkeley in the 1960s. His influence on Californian students has continued until the present day through the successful Ali Akbar Khan College of Music, now located in San Rafael.

Mellars’ film is told from multiple perspectives, including interviews with some of the famous musicians who have collaborated with Khan. Carlos Santana, John Handy, Zakir Hussain, Mickey Hart, and others join Khan’s sons, Alam and Aashish (themselves accomplished and renowned musicians), in remembering the great master. In addition to these screenings, Alam Khan and other musicians from the Ali Akbar College of Music will also perform a live concert to celebrate the premiere.

At the same screenings as Mellars’ documentary, the Festival presents a short film about another musician with ties to the Bay Area. Despite its overly dramatic title, it proves to be an interesting documentary short (nine minutes) consisting of an interview and performances by violinist Joseph Gold.

Gold, raised in southern California, was a student of Jascha Heifetz at USC. As a young professional, he came into possession of a violin bow once owned by Hungarian Eduard Remenyi (1828-1898), violinist to the Emperor Franz Joseph and Queen Victoria and friend of both Liszt and Brahms. Remenyi died violently onstage during a solo concert at San Francisco’s Orpheum Theatre, and, according to Gold’s account, all subsequent owners of Remenyi’s bow met with sudden, violent ends.

Gold fortunately seems to have broken the curse of the “Bow of Death,” and he gives an informal chat for the camera accompanied by his own complete performance of Henry Fischer’s virtuoso violin solo, “The Devil Speaks,” an appropriately macabre work for the documentary’s subject. Filmmaker Mark Pope makes judicious use of double exposures, animations, and effects in a way that is never intrusive, and contributes to the short’s charm.

As in Mellars’ documentary, Californian fusion of cultures also characterizes Hip Hop Maestro. This 40-minute documentary traces the career trajectory of Geoff Gallegos, or, as he is known onstage, “Double G.” Directed by Christine Lee, the film describes the emergence of an apparently new form of orchestral music making. This documentary will appear along with two others, all centering on themes such as community building and multiculturalism in California.

Gallegos is a lifelong jazz saxophonist, who refers to himself as an “underground composer.” Growing up in inner-city Los Angeles, he found a musical environment that was filled with hip-hop and rap. Add to that mixture the classical elements that he learned to incorporate during his years at Boston’s Berklee College of Music, and you have the ingredients for what the documentary calls the first Hip Hop Orchestra in the world. Its name is the daKAH Symphonic Hip Hop Orchestra and the story of its rise from the clubs of Los Angeles to that city’s most prestigious music venue makes an engaging film.

The combination of sounds and influences is something that exists in neither jazz, classical orchestral writing, nor “pure” hip-hop. It is, the documentary stresses, a new orchestral art form. Gallegos describes one such orchestration, called “Gang Starr,” as follows: “What was originally a DJ and a bunch of records is now 55 musicians ... The music isn’t generated from samples being layered anymore, it’s being generated from musicians being layered.” The acoustic phenomenon of such fusion is impossible to describe, which is where this film’s extended, uninterrupted scenes from the orchestra’s live performances serve an important function.