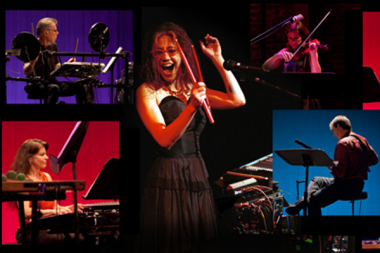 Amy X Neuburg has been a fixture on the Bay Area music scene for more than two decades. As a composer and classically trained singer with a four-octave range, she traverses a musical landscape that ignores the boundaries imposed by genre labels, freely incorporating elements from the worlds of pop and classical music into her own unique vision. An early practitioner of using electronic looping of voice and instruments in performance, she has performed around the U.S. and internationally in traditional concert halls and rock and roll clubs.

On December 5 and 6, Cal Performances will present Neuburg and the Paul Dresher Electro-Acoustic Ensemble at U.C. Berkeley’s Zellerbach Playhouse. The two longtime associates will premiere They Will Have Been So Beautiful: Songs and Images of Now, a program originally inspired by Dresher’s discovery of a grant proposal written by photographer Diane Arbus seeking support to capture the quotidian moments of average people as art for future generations. Featuring new compositions by Pamela Z, Lisa Bielawa, Conrad Cummings, Jay Cloidt, Fred Frith, Guillermo Galindo, Carla Kihlstedt, Ken Ueno, Neuburg, and Dresher, each work will be accompanied by projected photographs and feature texts which take their cues from Arbus’ original vision of creating art for future audiences from the everyday lives of the present. I spoke with Amy X Neuburg on the phone about the upcoming concerts, the Bay Area music scene, and her own work.

What made you and Paul Dresher choose the work of Diane Arbus as the inspiration for this project?

As Paul and I were discussing ideas he stumbled upon a grant application written by Diane Arbus back in 1962 and it was just a lovely piece of prose in which she proposed to photograph the quotidian aspects of life: the mundane, the ritualistic, and the non-elevated, with the idea that in the future these things will be beautiful and that they ought to be captured. At that time this was somewhat of a groundbreaking idea and of course Arbus became known for such photographs.

Paul did not get permission to set this grant application to music because itʼs part of her estate, but we liked the idea of what she was trying to accomplish and we thought, well letʼs just do that in our performance using any photograph that the composers choose. We knew we wanted to commission a number of interesting, diverse composers who each have their own approaches and allow them to choose a photograph and a text that spoke to them about life as it is today. So while Arbus was the inspiration she now has little to do with the program. It has become the work of the composers and their ideas and they have all approached it in ways that are as unique and interesting as we hoped they would.

In a country as diverse as this one, where oneʼs perception of reality is influenced by so many factors such as geography, ethnicity, and socioeconomic status, how does an artist capture and express the quotidian?

I think what comes across in this performance, is a sense of what is precious to each person involved. Some of the photos are simply still lifes of the home. Others are pictures of people who are experiencing traumatic events. One of mine is a picture of a snow-covered mountain top, with the idea that in the future this snow will no longer exist. Pamela Z has used a photograph of an outdoor landmark that no longer exists. Carla Kihlstedt sent us pictures of her daughter: And, of course, whatʼs more precious than moments in time while your child grows up? Paul is using photographs of two empty theaters, both very different yet evocative of each other, and the text is an essay written by a prison inmate about how these two photographs represent the preciousness of freedom.

What comes across in this performance, is a sense of what is precious to each person involved.

How will the photographs and imagery combine with the music for these performances?

They’ll be projected to be absorbed in a way we hope will become a point of interest and then a backdrop, allowing the music to become the focal point. The emotion will take place in the music, and the theater in the music.

Tell me about your new composition for these concerts.

My composition is inspired by some photographs I took in Wyoming of the snow-covered mountains. For months I was thinking this was going to be the focal point and the words were going to fall into place around this idea of the warming of the planet and the loss of a certain kind of beauty, which we all lose as we age. Interestingly, I had a series of tragic personal events this year I felt needed to be expressed in music, so the idea of the preciousness of the snow expanded into other things and it became a four song suite, which I hope is cohesive, the final one being about the mountain.

I like the trappings of cabaret. I feel deep down that the proper venue for me is something slghtly informal and slightly raunchy and that allows me to banter with the audience and make them feel comfortable.

Letʼs talk about the Bay Area music scene. I feel the ground is shifting, with new opportunities being created for both musicians and their audiences, as if a cloistered world is starting to open up.

Certainly in recent years several things have happened. One is that the economy has gotten worse and interestingly I believe this has caused artists to become more creative and more ambitious in how they present their work as a sort of defiance.

For instance, there are many new house concert series, new spaces opening up, new ensembles forming and finding creative ways to bring their music to the public. As people graduate from conservatories they are no longer under the impression theyʼre going to get a symphony job because there are so few symphony jobs available now. Theyʼre making their own scenes, theyʼre bringing classical music into the clubs or they're collaborating in interesting ways by starting their own series such as the Switchboard Festival, which was started by graduates of the San Francisco Conservatory of Music.

<I like the trappings of cabaret. I feel deep down that the proper venue for me is something slightly informal and slightly raunchy and that allows me to banter with the audience and make them feel comfortable.So I find that in the past 10 years or so the Bay Area has become quite a flourishing scene. Many lines are being blurred between genres, which is something that I have been interested in and advocated since the beginning because I feel those lines are arbitrary and unnecessary and what you can do by mixing so-called genres opens up all new possibilities. Itʼs a great inspiration to me to see younger people taking the initiative and making things happen for themselves. It gives me hope for the future of art.

You have a linguistics background. If you had to pick a genre for your own music what would you call it?

Itʼs a catchy phrase, but also appropriate and not simply a marketing ploy — I call it “Avant Cabaret.” I like the trappings of cabaret. I feel deep down that the proper venue for me is something slightly informal and slightly raunchy and that allows me to banter with the audience and make them feel comfortable and itʼs fine if they have a drink. Itʼs okay to be entertaining and at the same time be explorational and inspirational.