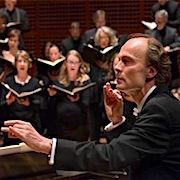 “You could bring out more chest voice, sopranos!”

“Have the voice fall down and speed up, depicting gravity sonically.”

These and hundreds of other requests-commands-exhortations were issued nonstop by Ragnar Bohlin at a rehearsal last week in the low-ceilinged, harshly-lit Zellerbach Rehearsal Hall C in the back of Davies Symphony Hall.

The unglamorous venue and the singers’ jeans-and-sneakers attire contrast sharply with what this and numerous other rehearsals will lead to: the physical elegance and musical bliss on March 30 when the Symphony presents Bach’s St. John Passion, three weeks ahead of Easter.

At the rehearsal, the acclaimed director of the S.F. Symphony Chorus talks, sings, plays, and conducts all at the same time, providing irresistible leadership for his charges ... none of whom appears to resist the Bohlin magic.

In an intense, inspired, and inspiring rehearsal process, Bohlin repeats the same sequence line by line or even word by word:

He explains the meaning of the passage; has the chorus say the text until it matches Bohlin’s Swedish-accented German; has them sing it; works on details as they sing it again and again. “We’ll take the music apart and put it together again,” he tells the singers.

In the break, Bohlin speaks with emotion and admiration for Bach’s 1724 Passio secundum Joannem, BWV 245, the older of the two surviving Passions, mentioning with regret that three Bach Passions are believed to have been lost. 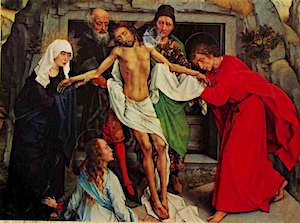 Passions tell the story of Jesus’s trial, crucifixion, and resurrection, with text from the Gospels, narration — usually by a tenor in the role of the Evangelist — interspersed with arias and chorales.

Johannes-Passion (the German title) opens with the oceanic majesty of the chorus “Herr, unser Herrscher” (Lord, our ruler) and concludes with the tearful but cathartic “Ruht wohl” (Rest in peace). Among its beautiful arias, accompanied by continuo instruments, are “Ich folge dir” (I follow you) for alto; “Ach, mein Sinn” (Ah, my soul) for tenor; “Mein teurer Heiland” (My beloved savior) for bass; “Zerfließe, mein Herze” (Dissolve, my heart) for soprano.

Bohlin says the chorus has “a most dramatic role, alternately being the angry mob demanding the crucifixion of Jesus, guards asking where Jesus is or throwing dice over his robe or personifying the congregation’s experience of the story.”

In an unusual revival of the times when church congregations participated in the performance, Bohlin has invited community singers, seated in the audience, to join in four chorales. Enrollment is still open, but not for long.

Participants receive their material in advance, prepare at home, and have their rehearsal in the afternoon of the concert. “This has worked in the past,” Bohlin says, “for example, at our last Christmas concert.”

Bohlin continues to speak about the oratorio, which is considered to be Bach’s “most operatic” work:

Several movements are highly dramatic and include some of Bach’s most intricate writing, with extreme chromatic lines and harmonies.

It is always very exciting to prepare the chorus for their function in the unfolding of the drama. We are proud to present soloists from the chorus, singing the highly personal and beautiful arias.

Also, we are excited to again perform with the excellent baroque orchestra Voices of Music.

Interpreting Bach centuries after the environment in which he composed is often a matter of dispute (or worse) when it comes to decisions about “modern performances.”

Bohlin’s approach to the oratorio is “to aim for a ‘historically informed’ version, meaning that we will use vibrato sparsely, finding instead musical expression and phrasing through awareness of shaping dynamics, dynamic ‘sigh-like’ hairpins, and agogics.” (An agogic accent is similar to rubato, emphasizing not only dynamic stress, but also extending it slightly beyond its normal time value.)

As always, Bohlin is focused on diction: “The German text must be clearly pronounced, but in a way that works with the phrasing and still feels natural. I work a lot with finding a diction that is clear and at the same connected to the phrasing and expression of the music, rather than superimposed.”

And then, as the chorus keeps trying to get “Jesum von Nazareth!” right, the Judas-led mob’s rhythmic, shouted demand to find Jesus of Nazareth, Bohlin laughs, pauses, and tells the chorus what tickled his funny bone.

When his sons were very young and Bohlin practiced the Passion, the boys picked up on that phrase and turned it into nonstop chanting of “Papa von Nazareth!” You have to be in the chorus (and in need of a break) to fully appreciate how funny that is. They did.

Drama there was, but ABS’s revivifying take on Bach’s masterpiece was mainly gorgeous.

Ragnar Bohlin leads the chorus in a skillful reading of Jacob Mühlrad’s Time.