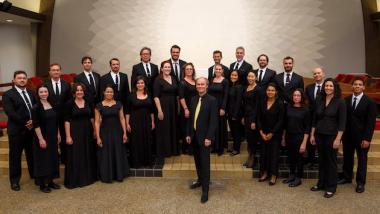 No stranger to the Bay Area, Swedish conductor Ragnar Bohlin has been music director of the San Francisco Symphony Chorus since 2007, winning three Grammy Awards for their 2010 recording of Mahler’s Symphony No. 8, including Best Choral Performance. While some might be tempted to rest easy on these impressive laurels, Bohlin continues to push the boundaries and limits of his craft. This pursuit of excellence is evident in his founding of Cappella SF and was on full display Sunday evening at the stunningly beautiful Mission Dolores Basilica in San Francisco.

Marking its fifth season, Cappella SF certainly lived up to its billing, in the words of composer-in-residence David Conte, as the “Rolls Royce” of choruses. While its impressive balance, blend, intonation, and diction could be continually praised, the power of this performance came from a quality well beyond technique. Palpable from start to finish was an emphasis on exploring contrast, color, and variety in the way a collection of human voices is able to create sound and connect with an audience.

The concert, titled “Unveiling: New Music From Sweden And America,” was nicely balanced from top to bottom. The “bookends,” Eric Whitacre’s When David Heard and Jacob Mühlrad’s Time, were definite highlights. Both composers made powerful use of silence, particularly Whitacre in his setting of the poignant Biblical text describing David’s grief over the death of his son, Absalom.

In between, we were treated to a variety of works, including multiple world premieres. Carl Unander-Scharin’s Djupt Under Dagens Yta, based on hymns and poems from the Swedish theologian Olov Hartman, first painted a picture of an ecologically devastated landscape devastated. Yet the tone changed midway through, emphasizing the power of humanity and spirituality to search for life and meaning.

The chorus shined in the premiere of Fredrik Sixten’s Seek Him. This representation of the search for meaning (and God) felt fresh and vibrant, with imagery reminiscent of a Tim Burton movie. Sixten made use of extensive leaps and complex tonalities, all handled with elegance and grace. Meanwhile, there was a sustained lyricism, swelling to an incredibly effective crescendo that seemed to grow organically from within the chorus. In particular, the sopranos shimmered above a rich foundation laid below them, while the basses provided extraordinary depth and presence when necessary, without overwhelming the group’s emphasis on a solid tenor/mezzo range. The intonation throughout this difficult piece was impeccable.

After intermission, David Conte’s newly completed Madrigals for the Seasons provided a refreshing change of pace. Each movement had a distinct flavor, as the composer shared his inspiration of recreating the seasonal changes of his native Ohio with a California audience. In “Summer,” we got subtle hints of Gershwin. The chorus again displayed incredible diction in “Autumn,” with John Clare’s text emerging with remarkable clarity, despite overlapping and layered dialogue. Bohlin’s conducting skill was displayed in “Winter,” where he elicited shimmering vibrato from the singers when necessary with his left hand, while maintaining extreme rhythmic accuracy with the right. Finally, “Spring” broke through, with the addition of piano and a lively, energetic setting of William Blake’s lighthearted text.

None of the pieces could have followed Jacob Mühlrad’s Time, which Bohlin described accurately as “symphonic” in nature. The emphasis on color and sophistication of harmony were truly remarkable, especially from such a young composer. The texture varied from thick and rich to light and ethereal. The word “time” is used in 27 different languages throughout the piece, and Mühlrad forces us to acknowledge their differences by alternately highlighting hard and soft consonants throughout.

Overall, this performance was a celebration of great progress in the art form of choral performance. In this genre, there is absolutely no substitute for live performance, and the Bay Area is extremely fortunate to have Cappella SF providing us all the rare opportunity to experience it at such an exceptionally high level.

Superb singing launches the new ensemble Capella SF into the stratosphere of vocal music, as it ranges over the centuries up to today.

This week, Ragnar Bohlin and the S.F. Symphony Chorus met their ultimate challenge, performing Bach's B minor Mass, a towering landmark of all music. The result is a delightful surprise; an intimate, gentle, lyrical performance of this majestic expression of yearning for peace and the good of all humanity.