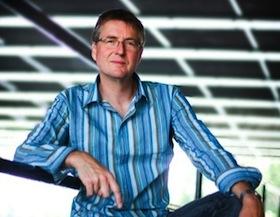 With the Carmel Bach Festival's new music director in charge, Bach himself has risen from the grave of encrusted tradition. Under Paul Goodwin's lead, last Sunday's performance of the St. John Passion, reclaimed the festival's namesake as Western music's greatest architect.

First, a little background is in order. When the Carmel Bach Festival engaged Bruno Weil as its music director, two decades ago, Robert Freeman, then head of the Eastman School of Music, expressed loudly and publicly his displeasure at the choice of a German for the post. Freeman, whose philosophy as an educator was “to stimulate the demand rather than the supply,” had of late developed numerous contacts within the classical music community of Carmel. In no uncertain terms, he defended Americans trained in America as being equal to any qualified candidate anywhere else.

In theory, the choice of Weil was a big step toward authentic Baroque performance practice, which had moved well past the festival’s long-lived, old-school conductor, Sandor Salgo. Ironically, it was not Weil so much as the specialist musicians he brought in, starting with violinist Elizabeth Wallfisch, who accomplished the makeover.

When the festival engaged Goodwin — alas, Mr. Freeman, a Brit — to replace the retiring Weil, its musicians and chorale had evolved into a formidable and respected Baroque company. With Goodwin now calling the shots, that ensemble on Sunday afternoon startled the festival audience with a riveting rethink of the St. John Passion. In what should be obvious to anyone familiar with the New Testament gospels, Goodwin envisioned Bach’s passion setting as dramatic theater only thinly disguised as a concert work. Yet, even at a festival named for Bach, the number of truly memorable productions of this, and the even more popular St. Matthew Passion, over the last 20 years, is pitifully small, most laudable with its individual parts, but lacking an overarching tragic vision. (Decades ago, Salgo had that vision but not the horsepower to pull it off consistently.)

Sunday, Goodwin started by jettisoning all the usual ceremonial trappings that inherently draw a barrier between the actual drama on stage and its witnesses in the hall. The arriving audience observed a motley crowd sitting, chatting quietly, and milling about the stage, all dressed in casual attire, shirts untucked, sleeves rolled up, jeans without belts, sandals or running shoes on their feet — the sort of thing you expect to find at many summer festivals. As the hour approached, this rag-tag group morphed into a small orchestra, on one side of the stage, and chorus opposite. Then one of its members became Paul Goodwin, and the orchestra suddenly launched, in quick time and with pulsing urgency, while the chorus shouted its opening cry to the Lord himself, “Herr!,” then repeated twice more, like stabbing daggers, a shocking premonition of doom.

This energy almost never let up. The narrator (called Evangelist), all the character parts (Jesus, Pilate, and so on), and the quartet of aria singers sang entirely from memory, and moved about the stage as actors in a play. Associate Conductor Andrew Megill’s crack choristers vividly delineated their two functions: the rowdy crowd demanding Jesus’ punishment by Pilate (and later his head), and the congregation of the faithful, who react to events with dismay in a variety of Lutheran chorale arrangements. (Joining in some of the chorale settings was a youth choir positioned at the front of the balcony but nearly inaudible to those seated in the first dozen rows.) As evangelist, tenor Rufus Müller sounded a bit hoarse — he has the most to sing, by far — while his well-directed movements set a confident example for the others to key off.

Soloists Start at a Simmer

The performance lost momentum with the solo arias, until well into Part 2, for want of their singers’ personal circumspection. Tight and dutiful early on, soprano Kendra Colton, countertenor Daniel Taylor, tenor Matthew Anderson, and baritone Alexander Dobson needed more encouragement from Goodwin to loosen up and emote. (They took the stage only for the duration of their solos.) Yet, each gained expression as the performance unfolded. (Opera singers, as opposed to concert artists, are usually more comfortable in “feeling” those long da capo arias.) Colton, in her final aria, “Zerfliesse, mein Herz,” made the greatest stride forward among the four.

Part 2 of the St. John offers tumultuous events and scenes. The chorus shouting demands at Pilate (sung by Tim Krol), Pilate’s personal conversations with Jesus (David Newman), the “Ach Golgotha” baritone aria with chorus, the choral crowd bursting into fugal counterpoint, the sorrowful alto aria “Es ist vollbracht” with viola da gamba and the dramatic description of the earthquake and opening of the graves — all seemed to accelerate the inevitable. Apparently Bach concluded that the “Ruht wohl” final chorus needed something else to restore faith to the faithful, hence the concluding chorale, “Ach Herr, lass dein lieb Engelein.” Sunday’s sold-out audience, absolutely won over, responded long and loud.

Violas d’amore, flutes, oboes, continuo instruments, and organ joined the strings, all now (from my vantage) using Baroque-style bows. This production repeats on July 24 (starts at 2:30 p.m.), and the festival continues through July 30.