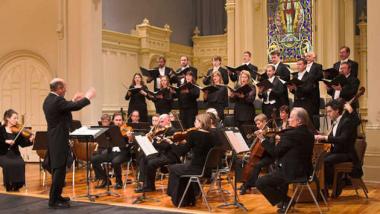 These are trying times. It is hard to find refuge from the constant barrage of ugliness that comes to us, mostly via the airwaves, in the form of nasty rhetoric, distorted truths and alternative facts.

Even if you know where to look, it is hard to find compensation for the damage done. Let alone, solace.

But we can (and should) be grateful that there are people like Jeffrey Thomas and his band of musicians: the singers and instrumentalists of the American Bach Soloists (ABS), whose sole purpose (and soul purpose) it is to create and maintain beauty; last Sunday afternoon in the form of J.S. Bach's Saint John Passion, in this case Version II, from 1725.

Not that this beauty is without its own kind of ugliness. After all, the subject matter of Bach’s masterpiece is a gruesome story. Strip away religion, and there you have a deeply emotional narrative with some very nasty characters and situations. A good story, well told; excellent drama.

In his Saint John Passion, Bach fully exploits the dramatic possibilities of the Gospel According to John, and, period specialists that they are, the ABS choir and orchestra did the same with Bach’s masterpiece, featuring an excellent cast of soloists: tenor Aaron Sheehan, baritone Jesse Blumberg, Canadian soprano Hélène Brunet, and tenor Steven Brennfleck, plus alto Robin Bier and baritone Bryan Jolly, who both made their ABS debuts.

Alto Robin Bier was lovely in the aria ‘Es ist vollbracht!’ (It is fulfilled!), and in the scene of Jesus’ trial before Pilate, there was an intense interchange between the Evangelist (Sheehan), Pilate (Bryan Jolly), Jesus (Jesse Blumberg) and the fabulous American Bach Choir, one of the best vocal ensembles in the field.

The ABS chorus stood out with its sharp interjections as commenting crowd, switching roles from objective narrator, to disciples of Jesus, or to His interior monologue, but mostly in the chorales of the Saint John Passion, and their many different emotional messages.