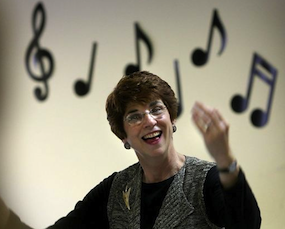 The last time I spoke with Susan McMane, not quite a year ago, I was writing a piece about her demise as director of the San Francisco Girls Chorus. She was tense, oblique, and wounded, although not in the way that might send you to a therapist. The effect of the dismissal seemed less psychological than physical, as strange as that sounds, more as though she’d been attacked by a wild animal in her own backyard. The need was not for explanation but simply to get away.

Of course her dismissal was not to be taken personally. That was the official vibe from the Girls Chorus board. In the end, it all felt more like a business decision. As though malaise had set in, and it just seemed time to reboot, rebrand, and find some marquee director to better shine the chorus medallion.

In late March, Ms. McMane directed her last concert with the Girls Chorus. “It was a lovely program” she told me the other day. “Glorious.” Surrounded by her girls, 65 of them, it ended on a high note as far as they were concerned. Still, the moment was marred because on March 1, Susan sent off a press release explaining that she would be joining another venture called the Young Women’s Choral Project.

“I did it so that people wouldn’t feel sorry for me, so that they would understand where I was going. I had postponed talking about my plans as long as I could but I need to make my future clear …. Unfortunately, that upset some people.”

After that she set off to Europe: to Paris, Berlin and Hanover, and then on to Stockholm and London. It was an escape to be sure but also an opportunity to talk to artistic directors and rejoin the fold. People who knew her story were amazed and incensed. “Nothing like that would happen here,” they told her, because after all, Europe has, for the most part, been more interested in the music than in the ‘brand.’ Moreover, directors may stay on for decades. Loyalty is not in name only.

Upon return from Europe she threw herself into her new chorus. She has 34 girls, ages 11 to 17, the majority of whom were in the San Francisco Girls Chorus. Some had finished the program at age 16 and had to move on — one feature of the new chorus is that you can participate until you turn 18.

“Our goal this year,” Susan explained, “is to make the face of a new organization. And we’re building a framework underneath but we haven’t fleshed out the details. We’d like to have an education component for younger girls, ages 5 to 11 years old.”

There were auditions in June — and no more until next June. A day camp was organized in July and recently the chorus began rehearsals, on Wednesday nights and Sunday afternoons. Tuition and concert fees come to $2700 a year, which includes voice lessons and the summer day camp. Students receive about five and a half hours of instruction each week and will sing about seven concerts a year.

The first concert is on October 27th, at First Unitarian Church in San Francisco: a 30-minute concert followed by a gala fundraising event. Two more concerts are scheduled for mid-December, in both San Francisco and Oakland. In March, the chorus will perform with the wondrous “body musician” and percussionist, Keith Terry.

Next June the chorus is scheduled to sing Vivaldi repertoire in Venice.

“Our goal this year is to make the face of a new organization ... We’d like to have an education component for younger girls, ages 5 to 11 years old.” - Susan McMane

And what is the sound of this new chorus, which is another way of asking what is Susan’s signature? “I tend to think of it as natural and vibrant. I’m trying to bring out a freedom of the voice and flexibility, the ability to sing, for example, a sad piece by a German composer and then sing something happier in a different style. I’m looking for flexibility among styles. “

As for a comparison between her former chorus and the new one, she replied, “The quality is just as strong. In fact, this is one of the best choirs I’ve ever conducted. Perhaps it’s because the girls are older and more sure of themselves. And they’re willing to work. At the auditions they had to show that they could sight-read and they also had to sing a solo, and I made it clear that if they didn’t really want to work this was not the place to come.”

Visions of the Future

The managing director of the Young Women’s Choral Project is Kaneez Mungee, who came to YWCP after six years in the administration of the Philarmonia Baroque Orchestra. She has a Ph.D. from Stanford in musicology.

She also has a clear vision of the chorus’s future. “In five years, I see an organization that will have grown substantially and be very successful musically, but also with broad community awareness. It will be more than simply a chorus, which we see as the core of a larger organization. Outreach will be an important part of our identity, reaching out to schools that may not have a music program and to girls who may not necessarily join the chorus.”

“We’re more interested,” she added, “in impacting people through what we do, than in how we might appear at first glance.

Our first interest is not whether somebody says, oh, this is a successful group. This has nothing to do with musical excellence; we are absolutely going after musical quality. But at the same time, we believe that success shouldn’t come at the expense of girls enjoying what they’re doing, both in the chorus and in other parts of their lives. And so we’ve designed a schedule in which a singer can play soccer, do ethnic dance, or do whatever else she is interested in and still sing at a high level. It’s all a concerted effort to allow the girls to become confident and well rounded, on their own terms.”

As her new life unfolds Susan McMane feels like a bird flown the coop and has now landed in a very supportive working environment, including an eight-member board headed by Tamara Hicks, whose daughter studied with Susan at the Girls Chorus. John Sebastian also has a seat; he is the only member of the Girl’s Chorus board to make the jump. Susan herself is also on the board.

“It’s a little bit awkward, and when they’re talking about my salary I can leave the room.”

“One of the things that we’ve talked about,” she went on to say, “is that we want parents on this board. It’s important because it is about the girls and the music. We want girls to have advocates, to say this is too much or to say we need go into more schools. We want to listen to our constituencies.”

Asked, half facetiously, about the ‘brand’ of the YWCP, Susan replied, “I don’t think we’ll have a ‘brand’. We’ll have a sound and a style. I hope it's a flexible style. I guess I want these girls to be seen as young, innovative, exciting, and adventurous, capturing both the traditional beauty of classical music, but also a group willing to risk. Beyond that I would like us to be known for our graciousness and our ability to listen to each other, and a willingness to keep growing and learning.”