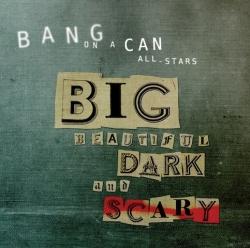 If you’ve been at least somewhat aware of what has been going on in new music in the last 25 years, you’ll have heard of Bang on a Can. This ground-breaking organization has spawned many offshoots that may stand as some of the more important leaders in the new-music world today.

I first saw Bang on a Can perform when I was a youngster. That concert was a huge formative experience for me. Perched on the edge of my seat, I listened to everything they did, and while I don’t believe I loved it all I have to admit that everything was, to my 11-year-old brain, really cool. Bass clarinet playing rock and roll licks? Cool. Electric guitar playing minimalism? Cool. Their works gave me fuel for creativity and inspiration, and even the stuff I thought was boring made me wonder about music.

Do you like fun? Seriously, do you? Then there’s no reason not to pick up the BOAC All-Stars latest two-CD set, celebrating their 25 years together, called Big Beautiful Dark and Scary. Despite the title, the music is riveting. This album collects some of the greatest music the band has made over its 25 years of being dedicated to “awesome.” While the arrangements of Conlon Nancarrow aren’t my favorites (there have been a lot in recent years), and while I found Louis Andriessen’s Life dragging in the context of the album (while enjoying its effervescent harmonies, particularly in the final movement, “Light”), as a whole this set is amazing.

On to the good stuff — which is everything else. In no particular order, Ridgeway by Kate Moore takes a different view on a landscape piece, making it teem with life and rhythm. While Moore was inspired by the music and landscape of Australia, there’s no literal quotation; instead, the subject has worked its way into her piece subconsciously. Basic rhythmic grooves slowly evolve into something more aggressive and sinister, almost losing the pulse and then collapsing in on a new rhythmic pattern to start over again.

I admit not knowing the backstory to Michael Gordon’s piece For Madeline, though I appreciate this slow-developing composition. A repeated and resonant E sings throughout most of it, while other instruments play around, through, and with that note, never joining it completely. It feels like it’s traveling somewhere, and when it does finally move it feels like an appropriate change.

David Longstreth is mostly known for his work with the Dirty Projectors, yet his three pieces on this album fit the BOAC aesthetic perfectly. They bring a playful presence to the album. My favorite is the surprisingly dark second track, called “Matt Damon.”

Despite the title, the music is riveting.David Lang’s Sunray, written for his father, showcases the interplay of this dedicated ensemble. Most of the performers are playing exactly the same pitches, and in the same order, though out of sync with each other. The result is a layered, beautiful texture that invites you to think about the openness of the sun rising.

The CDs’ title track, “Big Beautiful Dark and Scary,” lives up to its name. Dark, full harmonies are repeated ad nauseam and move slowly up in pitch before jolting back down and repeating. The incessant drive and energy of the piece is insatiable, constantly pushing the listener to the edge of sanity before popping over the top in a splash of sound and color.

At my first Bang on a Can concert, as a kid, the final piece on the first half was Evan Zyporin’s Music From Shadowbang, which I loved instantaneously. I then went out to buy the album of his shadow-puppet opera, Shadowbang — and found I just couldn’t stand it. On this album, though, BOAC has finally released the version I heard as a child, and, unlike many childhood loves, this doesn’t disappoint. This is the music I heard and loved those many years ago. It grooves, it sings, it hums, it buzzes, it dances.