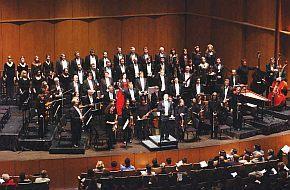 If you enjoy being dazzled by virtuoso musical fireworks, then the upcoming program by the American Bach Soloists is surely designed with you in mind.

The performances will include two fire-breathing concertos by Bach: the Harpsichord Concerto in D Minor, BWV 1052, and the A-Minor Violin Concerto, BWV 1041. The instrumentalists will also be joined by soprano Mary Wilson for a secular cantata by Handel and a sacred motet by Vivaldi. It’s hard to imagine where the audience, never mind the performers, will find a chance to catch its breath with that repertoire on the docket.

The two instrumental soloists on the upcoming program were both winners of the ABS International Young Artists’ Competition. Corey Jamason, the harpsichord soloist, is also the group’s regular continuo player, which hints at how keen ABS is on establishing long-term relationships with talented young performers. He will play Bach’s highly Italianate concerto, a work that is sometimes criticized as unidiomatic for the harpsichord because of its assumed genesis as a violin work. Yet, despite such purist snobbery, there’s a reason that this work remained popular throughout the 19th century (sufficiently so, in fact, that Brahms composed a cadenza for inclusion in piano renditions). The work is a fiery, rhythmically driven virtuoso showpiece throughout, and the apparent modifications that Bach made to the lost original violin part (including big, bombastic chords) give the piece a sonority unique among his concertos for keyboards. And Jamason has chops to burn, so the putative difficulties with the violinistic writing will surely be subsumed by inspired performance.

Violinist Johanna Novom won’t have a much easier job in her hands with BWV 1041. Little is known about the compositional history of Bach’s violin concertos, but he probably wrote them in Cöthen, where he had access to world-class instrumentalists (and where he wrote the bulk of his chamber music). Of course, it’s also possible that he composed these pieces later, for use in his famous Leipzig Coffeehouse concerts, or even as early as his period in Weimar, when he became familiarized with the works of Vivaldi. Vivaldi’s influence looms large in the Concerto in A Minor, with an opening movement in a clear and remarkably balanced ritornello form, and a permeating thematic unity throughout. We’ll wait in anticipation to see how Novom, the most recent winner of the ABS competition, handles the famous (and furious) bariolage passages (moments when the violinist is required to alternate rapidly between strings) in the fugal final movement. We might also anticipate that we’ll see her again on stage with ABS after this premiere. Audiences have a chance to hear a future featured player with this group from the ground floor.

Soprano Wilson will be the final virtuoso of the evening. A previous SFCV reviewer has called Wilson “a gift from the gods if I ever heard one,” which might well be appropriate praise, given the repertoire that she’ll be tackling in this upcoming set. She’ll begin by fighting with the gods in Handel’s cantata Il delirio amoroso (A lover’s delirium). She will embody Clori, grieving lover of Tirsi, who tromps down to the underworld to recover him after his untimely death. Tirsi is predictably dismissive of her heroic efforts, and she then schemes to transport them both to Elysium where they can live together in infinite Liebestodt — or “il dolce oblio di Lete” (the sweet oblivion of Lethe), in Cardinal Pamphili’s words. The cantata is a massive, 12-movement undertaking, befitting the dramatic nature of its plot. Handel was evidently quite happy with it, reusing some of the music in the Brockes Passion.

Handel’s Italian cantatas are not often heard, and that’s a shame. These works date from his early sojourn to Rome, where he composed music for Pamphili, nephew of Pope Innocent X, lavish patron of Corelli (among others), and eventual head of the Vatican library. This cantata is among the earliest Handel composed while in Italy, dating from January 1707, and copied out for another famous patron, Cardinal Ruspoli, one of the more important figures in the history of Baroque opera. (Handel had a knack for running with the big boys.)

Finally, aptly for such an Italianate program, Wilson will sing some sacred music by Vivaldi, the motet In furore iustissimae irae. The text tells the old story of the dangers of sin and the generosity of a God who would overlook such debased wickedness as dwells among us. Yet the music seems to delight in sensual pleasure, and the motet’s form — pretty well standardized by Vivaldi by the 1720s, when this motet was written — consists of the makings of operatic fare, with da capo arias and contrasting recitatives. The piece as a whole provides a chance for a singer to show off her diversity, as the text and music features wildly contrasting moods. Wilson, with her extensive experience on the operatic stage, may be just the singer to pull off this dramatic piece.

So, these upcoming concerts by American Bach Soloists will be evenings that feature not one, not two, but three virtuosos dazzling us with pyrotechnics. Given this group’s careful interpretive strategies, it will surely be a set full of as many musical pleasures as athletic ones.