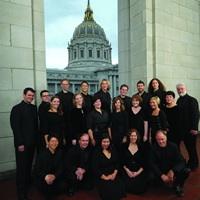 “Relevance.” This is the confident answer of Volti’s artistic director, Robert Geary, when asked what people will like about the choral ensemble’s upcoming program. The weekend of Nov. 5-7 will see Volti’s 32nd season open, with performances in Mill Valley, Oakland, and San Francisco.

The relevance that Geary claims comes, in part, from the texts of the choral works on the program. One of the truly liberating things about new music is that its composers feel less constrained to set historical or liturgical texts. Words offer a point of accessibility, even for concertgoers who profess not to enjoy new music.

A West Coast premiere of Louis Andriessen’s Flora Tristan offers these access points in French, Spanish, and English, with a libretto by Dutch poet Fleur Bourgonje. The text is based on the life of a 19th-century feminist and labor leader who traveled and wrote extensively on these causes. Andriessen, who became fascinated by Tristan’s writings, commissioned the libretto. His setting uses women’s and men’s choirs, often singing simultaneously in different languages, and sometimes coming together homophonically. At nearly 17 minutes long, the piece is relentless — as was Tristan’s life, it appears. Geary calls the work a tour de force, and adds that “if you are interested in hearing what one of the world’s greatest living composers has to say about women’s rights and workers’ rights, you need to hear this piece.”

Frank Stemper’s A Brief Message From Makanda, Illinois is another relevant work, drawing its text from an inspirational speech given by the late Senator Paul Simon. Stemper also has a Bay Area connection: One of his principal composition teachers was Andrew Imbrie at UC Berkeley.

Two more works on the program present texts by well-known American poets e.e. cummings and Stephen Crane. The latter is set by California composer Tom Flaherty, whose work, a world premiere, Volti commissioned. Composer David Lipten sets cummings’ words in Time’s Dream. Poems by cummings are often structured in such a way that it is not immediately clear which clauses modify which; Lipten’s settings musically reflect this structural subtlety. Geary calls the settings “equally elusive as the poems, but not more so.”

On Saturday night only, Volti will be joined by its Choral Institute Choir, which is made up of some 100 singers from high school choirs around the Bay Area. After an intensive weekend workshop with Volti, Geary, and composer Kirke Mecham, they will perform Mecham’s Five Centuries of Spring.

But it’s the music that draws you in, as much as the text. Geary says it’s a coincidence that this particular program contains multiple pieces with an explicit social message; pieces that Volti performs are commissioned or chosen by a committee made up of individuals with a variety of musical backgrounds.

“We don’t generally work thematically,” Geary explains. “Volti is really a choir that’s about music, and not about artifice. And what we’re interested in is each composer’s most creative effort and our ability to create a meaningful performance.”