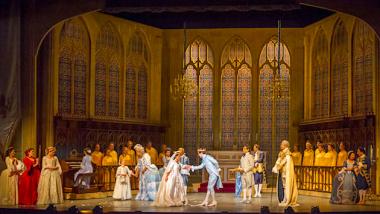 Tell an opera impresario to pull together a professional production of a new work in six months, and they’ll laugh. Tell them to do so for a score written by a 12-year-old, and they’ll probably start questioning your sanity. Somehow, Opera San Jose and the Packard Humanities Institute have managed the impossible. Precocious composer Alma Deutscher has expanded her Cinderella for its first, full-scale staging, which comes complete with a 44-piece orchestra, renowned conductor Jane Glover, lavish sets and costumes, and a young and talented cast. Cinderella isn’t without its flaws, but it illustrates its composer’s prodigious gift.

Deutscher has repeatedly said that she prizes beauty in music. Cinderella is indeed pretty in a traditionally melodic way. A good sign for Deutscher’s future as a writer of opera: Her best musical ideas encompass a variety of characters and moods. The stepsisters get charming, frivolous duets and ariosos full of trills and ornaments. (They are opera singers, after all!) This self-consciously operatic music is both funny and well-executed. Similarly, the Stepmother sings a thrilling short aria (“I must get rid of her”) with clear references to “Der Hölle Rache” (from Mozart’s Magic Flute) in both affect and stratospheric top notes.

Cinderella’s beggar girl song boasts the most original and interesting tune (hinging on surprising dissonance) and is also where Deutscher makes the most of the interaction between voice and orchestra. The clarinet dialogues with Cinderella’s voice in classic Mozart fashion, and the strings and woodwinds work together to create the dark, wintery atmosphere the story demands.

Deutscher plays the violin and piano (and plays both, plus the organ in the wedding scene, as part of this production). It may be her violin-playing that leads her to rely so heavily on the strings in her instrumental writing. The overture to Cinderella starts with a soft shimmering that swells into a full, soapy sound dominated by the violins. Melodies repeat without developing. Occasional comments from the brass suggest moments of drama, but those promises remain unfulfilled. The much shorter overture to the fourth act makes more balanced use of the orchestra and has a driving sense of purpose. The music builds up to the curtain’s rise and the Prince’s exasperated, “But why?”

Those who whine that modern operas lack hummable tunes will have nothing to complain about here. That is partly because Deutscher’s simple melodies are catchy (and sometimes haunting), and partly because the score makes generous use of repetition. The recurrence of the same tunes, both within and across scenes, can become grating. There’s enough excellent material here for a two-hour opera, but the run time is three hours.

Cinderella’s weakest point is its libretto. The underlying premise—Cinderella and the Prince are brought together by her music and his poems, rather than good looks and a glass slipper—is a smart revision of the classic fairy tale. However, the actual words, which have made their way through Hebrew (for the opera’s premiere in Israel) and German (for a Vienna production), are a problem, at least in this English version. Stilted spoken dialogue and directionless recitative intermingle. Bad poetry sinks otherwise good set pieces. The short, rhyming couplets sound childish—especially when awkward word order forces the rhymes (“when hope shines bright / dispelled is the night”). It’s ironic that the music, written by a child, seems mature, while the libretto, which several adults helped Deutscher shape, seems puerile.

The high production quality extends to the casting. At the palace, Nathan Stark hammed it up in the comic bass role of the King, his chatty demeanor contrasting with tenor Jonas Hacker’s fiery, sweet sound as the Prince. Brian James Myer gave both a great comedian to play off of in the spoken role of the Minister. Back at the opera house, Karin Mushegain (Zibaldona) and Stacey Tappan (Griselda) deployed sparkling voices and catty attitudes as the stepsisters, while Mary Dunleavy wowed with her powerful soprano as the Stepmother. Vanessa Becerra sang Cinderella with the warmth and honey the character demands. Mezzo-soprano Claudia Chapa showed off crunchy low notes as Emeline, the fairy godmother who brings the lovers together. The orchestra, conducted by Jane Glover, gave Deutscher’s score bright presence and forward momentum, even with its recycling of ideas.

Make no mistake: Alma Deutscher is a genius. If I were judging her opera merely as the product of a 12-year-old mind, I would have nothing but superlatives to write. Instead, I’ve engaged with Cinderella as a fully realized opera worthy of criticism—because it is. It could use improvement, mostly a much stronger English libretto and judicious cuts. But it’s remarkable evidence of Deutscher’s talent as a composer. This is not yet her masterpiece, but there’s no doubt that she’ll produce one.

Its the opera-friendly acoustic of the California Theatre, OSJ's Hansel and Gretel overflows with musical and visual delights, everyone inhabits their role so completely, and with so much relish, that the opera’s smile-filled ending is assured from the very start.